China's version of GPS now has more satellites than US original 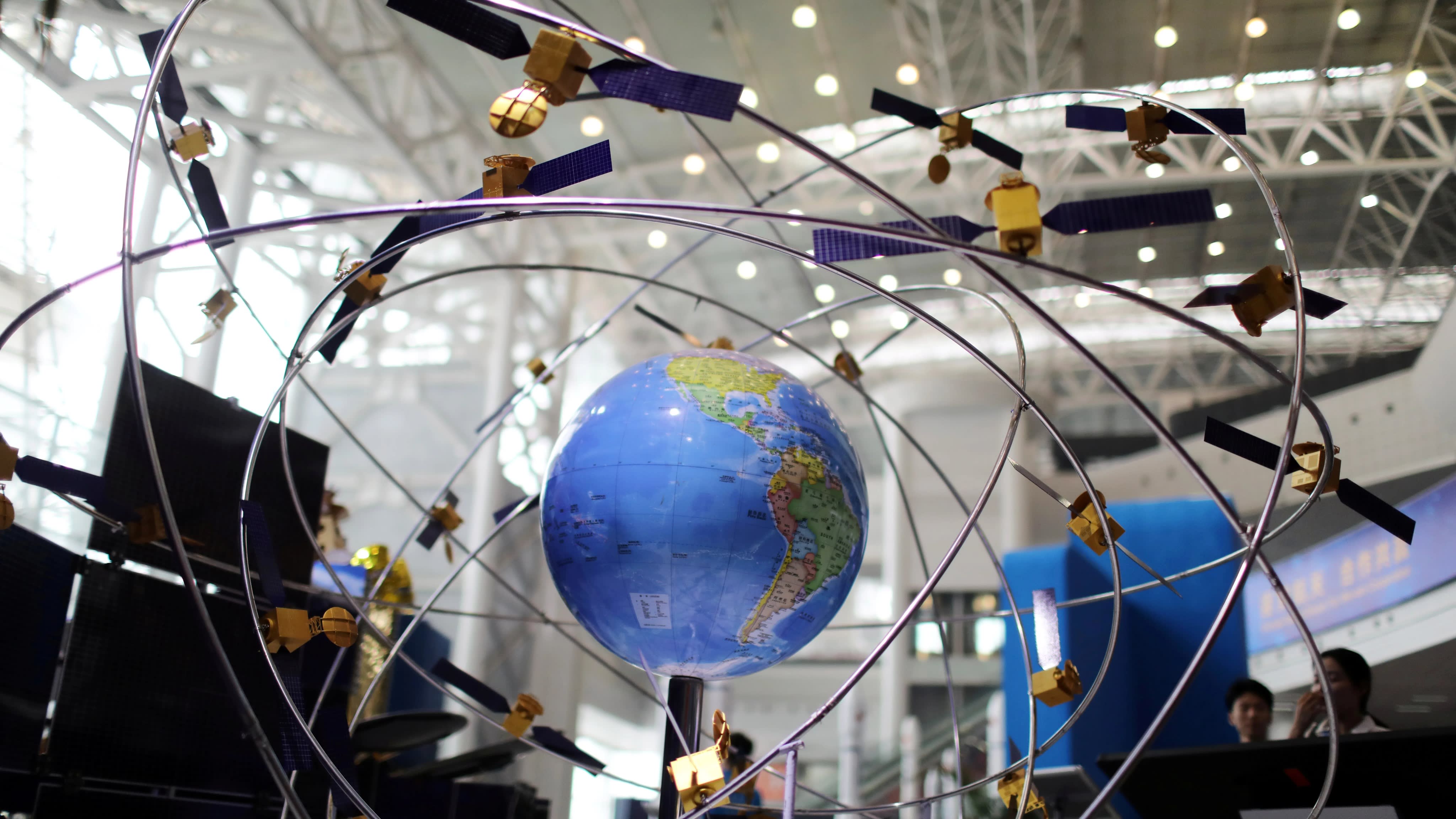 TOKYO -- China's BeiDou satellite positioning system has overtaken its U.S. rival in size, a shift with potentially huge implications for both high-tech industry and national security.

The U.S. has long been the world leader in satellite-based positioning with its Global Positioning System. China by contrast did not put itself on the map until relatively recently, launching its first such satellite in 2000.

Satellite-based positioning systems are the bedrock upon which a vast array of location services is built -- everything from smartphone games to emergency notification systems makes use of location data. These systems also allow aircraft and ships to navigate and enable remote operation of huge agricultural and mining machines with pinpoint precision.

A Nikkei analysis of satellite orbit data from leading U.S. receiver maker Trimble highlighted BeiDou's rapid growth. China launched 18 satellites for the system in 2018 alone. As of the end of June, there were 35 BeiDou satellites in operation, compared with 31 for GPS.

The EU, meanwhile, has 22 positioning satellites and Russia 24. Japan operates four "quasi-zenith" satellites, which are limited to regional use, while India has six.

China is using its Belt and Road Initiative to promote the BeiDou navigation system. BeiDou satellites were the most frequently observed in more than 100 of the 137 countries that have signed on to the massive infrastructure project. Most were in Southeast Asia and Africa.

The Pakistani military relies on BeiDou for positioning data, and in April there was a test run of self-driving tractors in Tunisia using the system. More than 30 countries in the Middle East, Africa and elsewhere use the Chinese navigation system. If it becomes the standard in these countries, China will have an advantage in introducing new technologies and products. 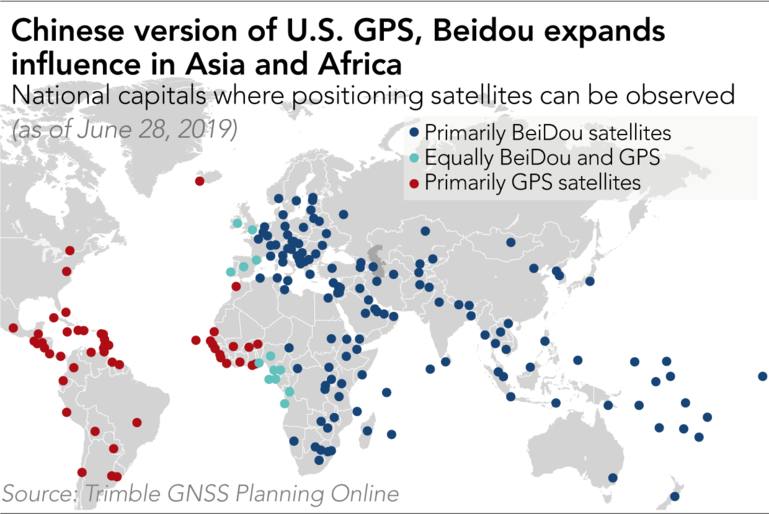 BeiDou is also making inroads in Japan, the U.S. and Europe. About 10 Chinese satellites were seen over New York and London, fewer than in Asia. But there were almost as many Chinese satellites overhead in the two cities as American and European ones during certain hours. Japan's four quasi-zenith satellites usually operate in conjunction with around 10 GPS satellites. But more than 20 BeiDou satellites could be observed daily over Japan.

A report by the U.S.-China Economic and Security Review Commission, a U.S. congressional panel, estimates that Beijing will invest up to $10.6 billion on its satellite positioning system between 1994 and 2020. The country plans to launch about 10 satellites by 2020. The bigger the constellation of satellites, the more accurate the positioning. Nobuaki Kubo, a professor at Tokyo University of Marine Science and Technology, believes BeiDou will be as accurate as the satellite systems of advanced economies within a few years.

The growth of China's satellite data positioning industry has profound implications. Chinese smartphones and car navigation systems are BeiDou-compatible by default; foreign manufacturers are following suit because products and services that use BeiDou are available in many other countries.

U.S. chipmaker Qualcomm was the first to supply chips for BeiDou-capable smartphones. Leading American smartphone makers other than Apple use the chips in their devices. STMicroelectronics of Switzerland adopted the BeiDou system for its automotive semiconductors in 2015.

"We need to be compatible with positioning satellites around the world with a single type of semiconductor," said Yuji Motohashi, who heads the automotive digital product division at STMicroelectronics Japan unit. For companies with global ambitions, making BeiDou-compatible products is a necessity.

Chinese tech companies are using BeiDou to sharpen their edge. Lenovo Group Vice President Chang Cheng announced in May that the location function of its new Z6 smartphone is accurate to within 1 meter. The handset has a chip that receives signals of varying frequencies from BeiDou satellites to improve accuracy, which for most smartphones is about 3 to 5 meters.

Qianxun SI, a location services provider funded by Alibaba Group Holding and others, is using BeiDou signals and data from more than 2,000 ground stations to create a positioning service for self-driving vehicles with an accuracy in the centimeter range. Just as the U.S. became the leader in positioning services with GPS, China is working to develop new satellite-based technology and promote it around the world using BeiDou. The rise of BeiDou has raised alarms in the U.S. national security establishment. Unlike GPS, which only sends signals, and cannot identify the location of receivers, BeiDou's communications with the ground are two-way.

When using BeiDou for car navigation, the receiver could theoretically transmit the car's location to a satellite in orbit, said Dean Cheng, a senior research fellow at the Heritage Foundation in Washington. He also believes Chinese satellites can jam signals in specific areas. The U.S. government is worried that such capabilities could be used in cyberattacks.