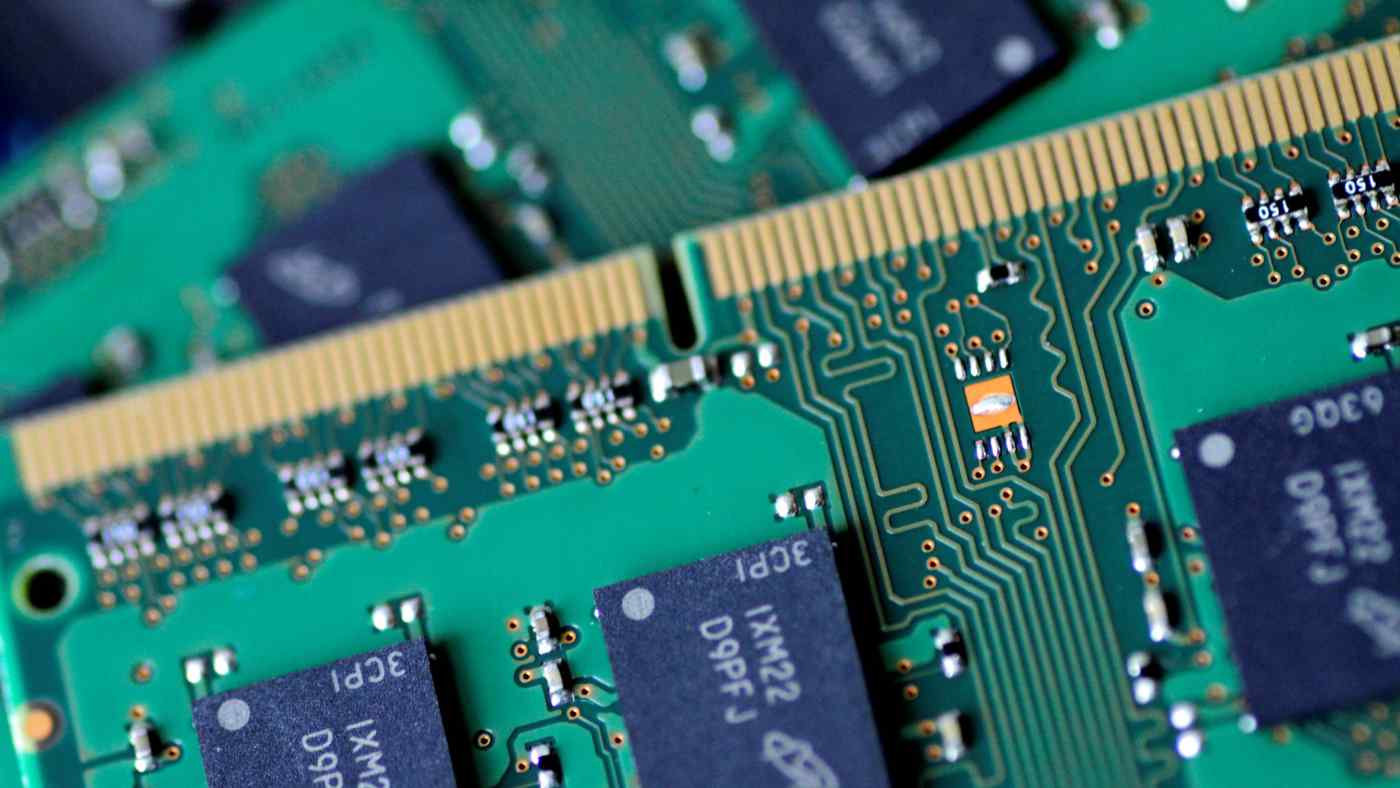 BEIJING -- Chinese high-tech companies are rushing to produce their own semiconductors as rising trade and security tensions with the U.S. increase the risk that supplies from outside may be squeezed.

"China has relied on imports for high-performance chips, but that can change in the age of artificial intelligence," Baidu CEO Robin Li recently said.

Despite being the world's largest semiconductor market, making up 40% of the global market on a value basis, China sources only 10% of its chips domestically, according to domestic media. China's semiconductor imports totaled $260 billion last year, beating the tally for oil.

President Xi Jinping has called for self-reliance in the industry after the U.S. cracked down on trade with certain high-tech Chinese companies. The leader has set a target of boosting the ratio to 40% domestic production by 2020 and 70% five years later.  However Chinese companies could still face obstacles as the U.S. has now begun to crack down on the export of vital chip-making equipment.

Meanwhile, Baidu has unveiled its "Kunlun" chip for artificial intelligence computing that can be used to process large amounts of data, like sounds or images from cloud devices for voice recognition software or automated driving. The chip will feature a 14-nanometer Samsung Electronics process. Details about mass production and shipments have not been revealed.

Alibaba, which has been pouring resources into cloud services, has also entered the semiconductor business. Chairman Jack Ma made the announcement soon after the U.S. Department of Commerce barred suppliers in the country from doing business with Chinese telecommunications equipment maker ZTE, which was forced to halt smartphone production because it was unable to procure American chips.

"The market of chips is controlled by America... and suddenly they stop selling," said Ma in late April.

Addressing these concerns, Ma recruited talent from U.S. chipmakers like Nvidia to form Pingtouge Semiconductor, an offshoot of Alibaba's chip division. The company plans to begin shipments in 2019 for semiconductors used in AI that analyze large amounts of data.

The chips will first be used in cloud service devices for smart cities that help efficiently manage urban areas. Applications will then be expanded to automated driving and voice recognition.

Gree Electric, meanwhile, invested 1 billion yuan ($145 million at current rates) in August to establish a wholly-owned semiconductor subsidiary to enter the chip development field. The company had conducted research on semiconductors for such uses as air conditioner control panels, but with few results.

But after ZTE's trouble, Gree Chairperson Dong Mingzhu told Chinese Central Television that the company was not afraid to invest 50 billion yuan to secure core technologies and succeed in semiconductor research, setting up the new unit shortly thereafter. The subsidiary will concentrate on chip design, but could also be involved in production.

Konka Group, a maker of home electronics like televisions, also set up a semiconductor division in May, and is considering an acquisition in the industry. The segment aims for sales of 10 billion yuan in five to 10 years.

Huawei Technologies said in October that it would begin mass producing high-performance AI chips. Their processing power will be the fastest in the world, topping rival products from companies like Nvidia, said CEO Eric Xu. 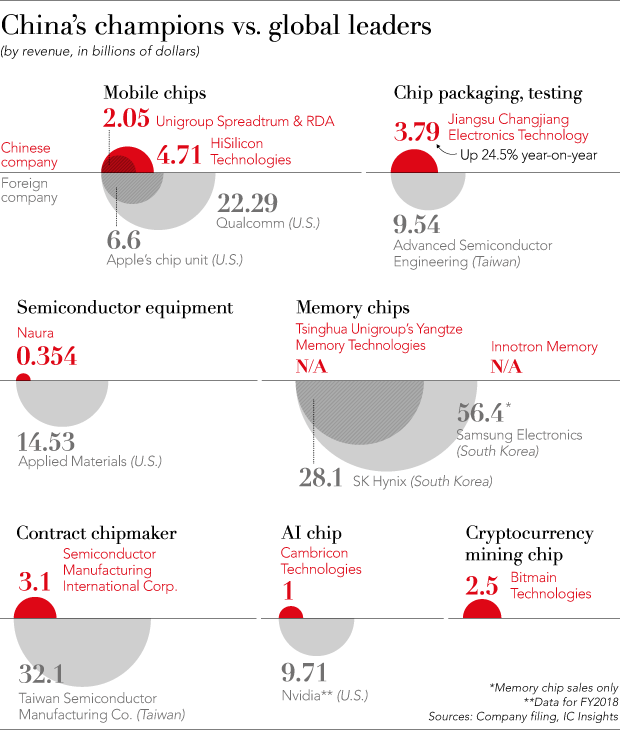 Semiconductors are divided into memory for information and large-scale integration for processing data. Internet companies like Baidu are developing LSI chips for specific applications. Production will likely be outsourced to specialized contract manufacturers.

The first of those companies, Yangtze Memory Technologies -- also known as Yangtze River Storage Technology or Changjiang Storage -- focuses on cutting-edge, three-dimensional NAND flash memory. Innotron Memory, meanwhile, targets DRAM for mobile devices, while Fujian Jinhua Integrated Circuit Co., or JHICC, focuses on DRAM for home electronics. The companies have invested the equivalent of billions of dollars in their efforts. Once production gets under way in earnest, their presence will put heavy downward pressure on the market.

Players in developed economies have a company grip on manufacturing commodity-grade memory, with companies like South Korea's Samsung and America's Micron Technology, as well as a lead in developing large-scale integrated circuits. Taiwan Semiconductor Manufacturing Co. and its compatriots are strong in contract manufacturing. Chinese internet and home electronics companies have started making the specific kinds of chips they need, a niche area of the overall market.

However, China has not built up manufacturers of chipmaking equipment to supply the trio, so it imports equipment heavily from the West -- a method that faces uncertainty as wary eyes are cast on Chinese high-tech industries from Washington and elsewhere.

The U.S. Department of Justice announced Thursday that a federal grand jury had indicted JHICC on charges of economic espionage for stealing manufacturing secrets from Micron. Before that, Washington had already slapped the company with an export ban preventing it from obtaining U.S.-made equipment, a move seen as severely impeding its efforts to enter mass production.

China's homegrown chipmakers also face a serious shortage of technicians. Although JHICC's problems began with an effort to headhunt talent from Micron, the company and its compatriots are apparently still trying to lure veterans from European and American players, raising the possibility of further tension with the West.

In September, Xi said China "must stick with the path of self-reliance amid rising unilateralism and protectionism" -- a statement taken as a sign of his desire to build up China's technological muscle and oppose the U.S. But as for increasing China's proportion of homemade chips, a core step in that effort, the seas ahead look rough.