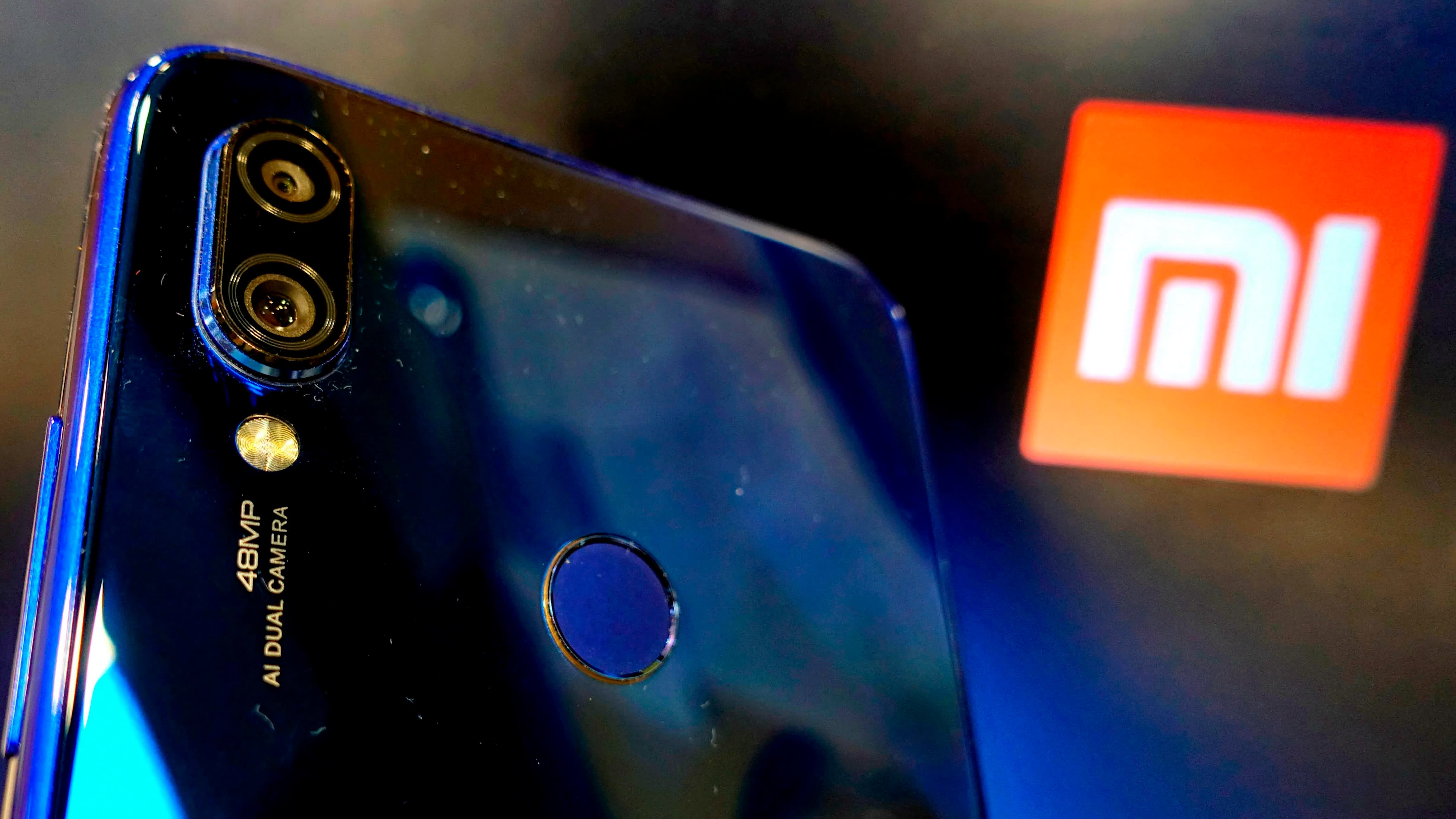 BEIJING -- China's mobile phone majors are stepping up their foray into the Indian market. As the Chinese smartphone market, the world's largest, is peaking out, those manufacturers, including Xiaomi, Oppo and Vivo, see India as the next battlefield.

Xiaomi's shipments in India have already surpassed those in its home market in terms of volume, with India becoming the biggest buyer of Xiaomi smartphones. The leader's share of the Indian market has reached about 30% in only five years since it entered in 2014.

The Chinese company's India business had a bitter start. When the company held in New Delhi the first gathering to unveil its products in India in 2015, CEO Lei Jun's awful English pronunciation in his speech, rather than the products, grabbed people's attention. Chinese young people made fun of the way he said, "Are you OK?" on Bilibili, the popular Chinese video website.

As if the incident suggested the company's slump, Xiaomi's global shipments plunged 36% year on year in 2016, due in part to a rise in competitors. But the release in India of a low-end model, the Redmi Note 3, changed the situation. With the model selling 2.3 million units in six months, Xiaomi turned profitable for the first time in India, weathering a financial crisis.

Since then, Xiaomi has been penetrating the Indian market with tremendous force. The Redmi's prices just fit India's income levels, and Xiaomi has successfully ridden a wave of growth in online shopping in India.

At the time, Amazon of the U.S. and leading Indian online store operator Flipkart were vying for dominance in the Indian internet retail market with a discounting spree. This augmented Xiaomi's online sales, stabilizing the company's earnings. In 2017, Xiaomi began opening brick-and-mortar stores, the Mi-Home Stores chain, in India, outdistancing the competition. 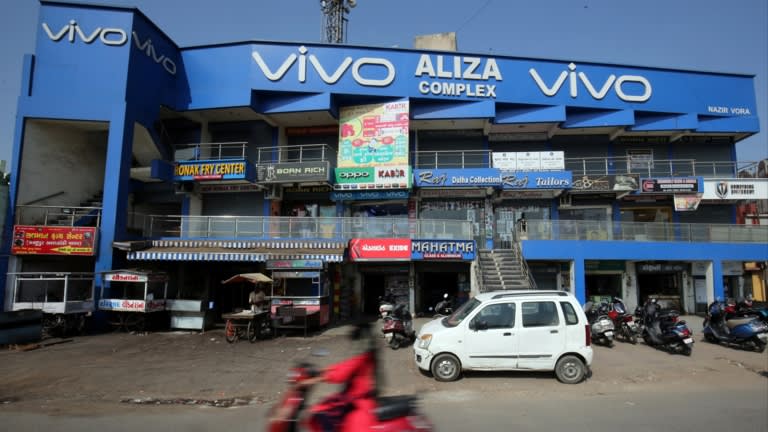 Vivo gained popularity in the India with the launch of the V15, a model designed especially for the Indian market.   © Reuters

Oppo and Vivo entered the Indian market at about the same time as Xiaomi. Today, however, their sales don't come close to Xiaomi's.

The two companies initially marketed in India as they did in China, focusing on physical stores and employing popular entertainers as spokespersons.

But they have not been able to penetrate the Indian market as rapidly as they had intended. Price is the biggest hurdle for Indian customers. In China, the two companies' main models are priced at 2,500-3,000 yuan ($360-430).

According to U.S. research firm IDC, however, 78% of smartphones sell for $159-$200 in India. Therefore, the Indian agents of Oppo and Vivo saw their sales hovering around the break-even point.

The two companies discontinued less effective ads, reduced profit allocation to sales channels, and closed about 10,000 physical stores each. As a result, they have been gradually regaining vigor.

"We take our time," said Chen Zhiyong, senior vice president of Vivo's Indian unit, in a speech in Hindi at an academic conference in India. After structural reforms, Vivo's shipments in the January-March quarter of this year soared 108.4% from a year earlier, with the Vivo V15, a model designed for the Indian market, proving the most popular in the upscale sector.

Oppo came out with Realme, a brand exclusively for online sales. The model achieved sales of 1 million units in several months, drawing the most attention in the Indian mobile market in 2018.

In marketing Realme, Oppo borrowed from Xiaomi's marketing strategy for Redmi. It nurtured a fan club and set Realme prices as low as Redmi's, underscoring the fight with Xiaomi. 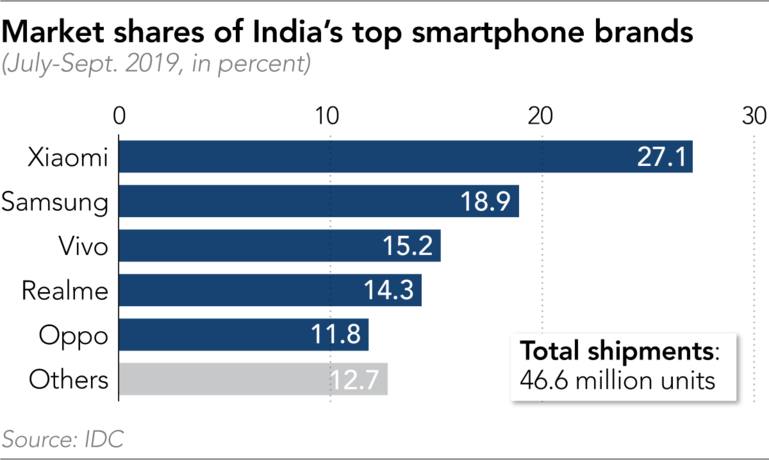 In the meantime, the high-end smartphone market in India was under the reign of Apple and Samsung Electronics. But a Hong Kong research firm found that Apple's sales in India plummeted 42% year on year to 220,000 units in January-March this year.

The main reason for the sharp sales fall was a gradual increase in tariffs on imported smartphones since Indian Prime Minister Narendra Modi launched the Made in India initiative. Chinese makers rushed to build plants in India to sidestep the import tariffs.

It was impossible for Apple to take such prompt action, however. The U.S. company depended heavily on products imported from China for its sales in India. Local production was limited to such smartphones as low-priced SE models, until recently.

Meanwhile, Samsung swallowed its pride and took the offensive. It picked a local celebrity as brand ambassador and became the title sponsor of a cricket team -- cricket is one of the most popular sports in India. These are marketing measures taken by Oppo and Vivo as well.

The South Korean company also began selling the entry-level M series at a low price of 7,000 rupees ($100) or so, dealing a blow to Xiaomi. Samsung has recovered, with its shipments in the April-June quarter this year closing in on Xiaomi's.

As for the 4G smartphone market, while China's is already in the dusk, India's is just at the dawn. Chinese makers are waging all-out war in the Indian market. Only time will reveal the winner.