Clock ticks for China unicorns as US listing window narrows

NEW YORK -- Xiao Shanglue has plenty of titles already -- he is founder, chairman and CEO of Yunji, a Chinese e-commerce startup. But if things go as planned, he will soon bag another one: billionaire.

Xiao owns close to half of Yunji, which is scheduled to list on the Nasdaq on Friday. The company is expected to be worth more than $2 billion after its initial public offering. Located in Hangzhou, where Alibaba Group Holding is also based, the young company seeks to upset China's e-commerce landscape with its social sharing and membership model. Yunji expanded its customer base tenfold within two years to 23.2 million in 2018.

Yunji joins five other Chinese unicorns -- privately-held startups with a valuation over $1 billion -- that have listed or filed to list in the U.S. this year, a number already surpassing that during the same period in 2018.

While some of the biggest names, such as Didi Chuxing, Ant Financial and ByteDance, have remained quiet so far this year, lesser-known Chinese unicorns are squeezing their listings into 2019's already crowded U.S. IPO scene alongside local heavyweights such as Lyft and Uber to take advantage of a receptive market before the market takes a turn for the worse.

"There's an argument to say that this is the best time to IPO, potentially ever," said Barrett Daniels, partner and national IPO services leader at Deloitte & Touche. "We don't quite know what 2020 is going to look like, and uncertainty is the enemy of the IPO." Xiao Shanglue, CEO of Yunji, a Hangzhou-based e-commerce startup on track to list on the Nasdaq on Friday. Photo courtesy of Yunji.

U.S. President Donald Trump has repeatedly tweeted about stock market gains since he took office, but as the 2020 presidential elections loom, more volatility is expected to hit.

The U.S. equity market has been on a bull run for a decade -- believed to be the longest in history -- providing a favorable environment for public listings including Alibaba and more recently Pinduoduo and iQiyi, but this window could soon be closing.

David Getzler, head of U.S. equity capital markets at Societe Generale, said there is a general expectation that there will be an economic slowdown next year, which would affect companies' listing plans.

"Everything's pricing in positive news at the moment -- positive news on global economy, monetary policy, and U.S., China resolving trade differences," Getzler said. "If you wait, and the markets shut down, you're probably not going to do your IPO at that point."

This sense of urgency is felt particularly at some of the smaller Chinese startups. As these companies try to capture or even disrupt the market, they are often in more dire need of cash than the likes of Didi, which has deeper pockets thanks to billions raised from investors. One of the young companies racing to list in the U.S. is coffee upstart Luckin, which filed last week for a $100 million listing on the Nasdaq. Founded less than two years ago, Luckin spent $150 million in the first three months of 2019, almost half of what it spent during the whole of 2018. The company recorded a net loss of $241 million on $125 million of revenue in 2018 -- its first full year of operation.

Gaming-focused, live-streaming site Douyu, which filed for an IPO of $500 million on the same day as Luckin, is also in the red, while still battling for market share with Huya, another leading Chinese live-streaming company that went public in the U.S. last year.

Meanwhile, China's private equity and venture capital sector has started to cool after years of fund-raising frenzy. According to Bain & Company, $13 billion in private equity was raised in China through renminbi-denominated funds in 2018, down almost 90% from $93 billion the year before.

"The reception for risk assets has been good, as we've seen decent-sized gains in global assets, both U.S. equities as well as Chinese equities," Thooft said. "When other players see that happening, they try to take advantage of that as well."

But investors are also getting more cautious, especially after Meituan-Dianping and Xiaomi took a dive following their Hong Kong listing last year. Even the super-unicorns in China tech are beginning to feel the chill.

Beijing-based ByteDance, which operates viral short video app TikTok, saw prices of its shares sag in the secondary market and is deferring its IPO to late 2020 at the earliest, the Financial Times reported last week, citing investors and investment bankers. ByteDance was previously valued at $75 billion after getting fat checks from investors like Masayoshi Son's SoftBank Group in 2018. 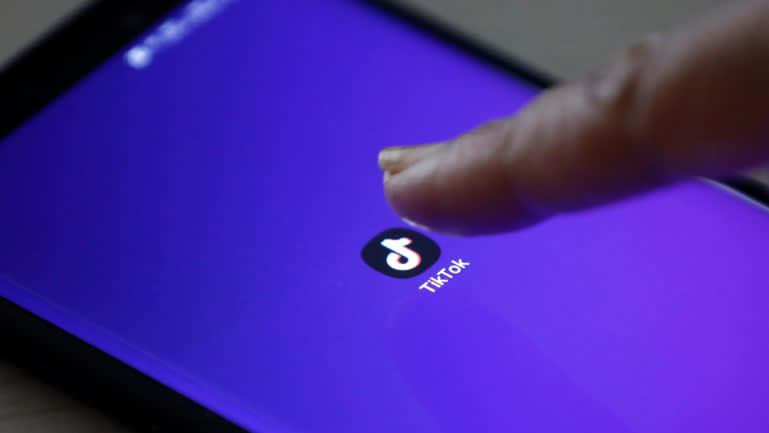 The logo of ByteDance's short video app TikTok is seen on a mobile phone screen. The Beijing-based startup is reportedly deferring its IPO to late 2020 at the earliest.   © Reuters

Ride-hailing company Didi's valuation recently dropped to $51.6 billion from $56 billion in late 2017, according to figures revealed by shareholder Uber in its own IPO prospectus, filed to the U.S. Securities and Exchange Commission last month. Didi has its own problems after allegations that its drivers murdered two passengers in 2018. Sizeable job cuts this year are also casting a cloud over the company's future.

When it comes to smaller Chinese unicorns that have considerably less exposure overseas, it is even harder for investors to tell whether the companies have a sustainable story on growth and profitability.

This is especially true for emerging companies with business models native to China, such as Ruhnn Holdings, a platform for influential bloggers that went public on the Nasdaq this month, raising $125 million to reach a valuation over $1 billion. Shares of the company opened lower than its IPO price and are trading even lower now.

Drew Bernstein, managing partner of Marcum Bernstein & Pinchuk, a New York-based accounting firm, said that in a lot of cases American investors do not have a firm grasp of Chinese companies listing in the U.S.

"It's not like investing in a company in the United States where you can just get on a plane and fly out there, meet them and talk to them. They speak a different language, and they are 7,500 miles away," Bernstein said.

Not a lot of investors -- even institutional ones -- have the ability to do on-the-ground due diligence on Chinese companies, he said. "The issue is they know what to do but they don't -- or can't."