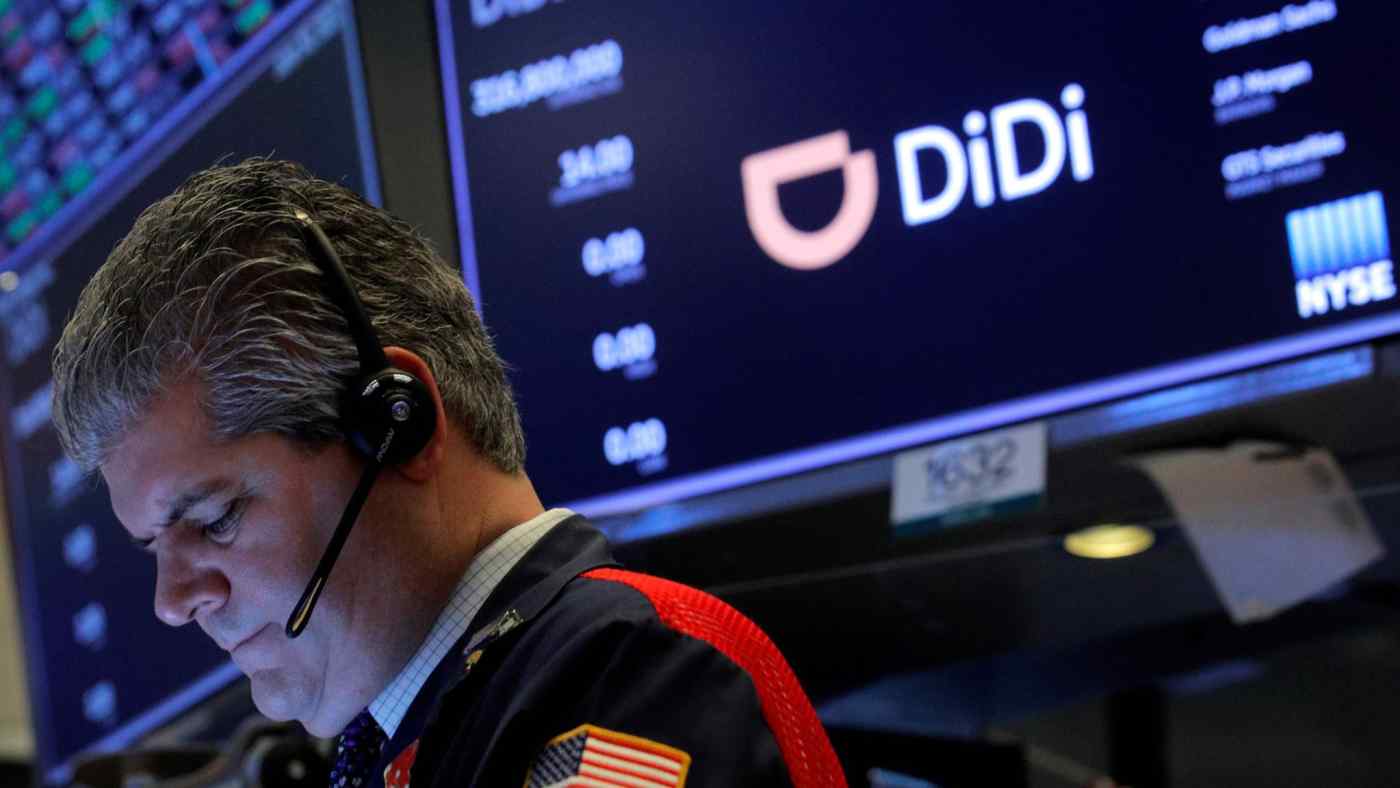 By comparison, U.S. ride-hailing giants Uber Technologies and Lyft were valued at around $75 billion and $24 billion, respectively, on their IPO days. Uber stood at $93.81 billion on Wednesday, with Lyft having a $19.92 billion market cap.

Representatives of the company, which is backed by SoftBank Group's Vision Fund and Tencent Holdings, got a shock during their two-week premarketing campaign as they hoped to swing a $100 billion valuation similar to that of Uber, Nikkei Asia previously reported.

They met such strong resistance that the company settled on a valuation of up to $67 billion -- just above the level set in a 2018 fundraising. Didi also recalibrated the fundraising target to $4 billion, less than half its initial goal, three people familiar with the transaction said.

Yet Didi's IPO remains one of the biggest by a Chinese company in New York, after Alibaba Group Holding's $25 billion fundraising in 2014. Didi, founded in 2012 by Cheng Wei and Jean Liu, operates in 15 countries and serves 493 million annual active users on its platform, according to a company filing. Cheng is now CEO, while Liu -- daughter of Lenovo Group founder Liu Chuanzhi -- serves as president.

Cheng owns a 6.5% stake in the company after the IPO, while Liu holds 1.6%. At the Wednesday closing price, their shares in Didi are worth $4.4 billion and $1.1 billion, respectively.

SoftBank Group is Didi's top shareholder, with a 20.2% stake through its Vision Fund, following the IPO. The stake is now worth more than $13.7 billion based on Wednesday's closing price, leaving the Japanese conglomerate at a modest gain given it has invested a total of $11 billion in the Chinese ride-hailing giant.

Uber, which holds a 12% stake after selling its Chinese operations to Didi, is the company's second-largest shareholder. Tencent, the Chinese technology and entertainment giant, owns a 6.4% interest.

Though Didi reported a $1.6 billion loss for 2020 owing to the disruption of the coronavirus pandemic, it has logged a turnaround of sorts this year. Investment returns helped the company post net income of $837 million for the first three months, despite a loss from operations of $1 billion.

But Didi's long-term profit prospects still pose concerns as it invested heavily in international expansion and autonomous driving. The international business and other operations lost 1 billion yuan ($155 million) and 8.1 billion yuan, respectively, in the first three months of the year.

The company faces intense competition from the likes of Uber and Lyft in the global market, where Didi has invested billions in expansion. It launched food delivery services in Japan in April 2020 and now ranks as the second-largest ride-hailing platform in Latin America, the filing shows.

Didi also is embroiled in a regulatory crackdown on technology companies in China, which imposed a record fine of 18.2 billion yuan on Alibaba this year. In March, Didi was fined 1.5 million yuan for "improper pricing behaviors."