HONG KONG -- Didi was a lifeline for Cindy Zhu. The 29-year-old software engineer at Tencent Holdings in Shenzhen relied on China's largest ride-sharing app to get to work every day. But two weeks ago she started to try four other apps after colleagues told her their rates are cheaper than Didi's.

And they were right. Zhu often received 50% discounts for rides ordered through Alibaba-backed AutoNavi, also known as Gaode. As a new user, she also received generous coupons from other apps, including Caocao Mobility, the ride-hailing arm of automaker Zhejiang Geely Holding, and Ruqi Chuxing, a joint venture between Tencent and state-owned GAC Group.

"I don't use Didi that often now. I use whatever is cheapest," Zhu said. "Their services are not so different."

SoftBank-backed Didi has enjoyed absolute dominance in China's ride-hailing market after it ousted most domestic players years ago in a brutal price war and acquired Uber's China business in 2016. Didi had 377 million annual active users and 13 million active drivers in China for the twelve months ended March, according to its prospectus.

But now rivals see a rare opportunity to shake Didi's grip on the market after China's cyberspace regulator blocked the company from signing up new customers and drivers, and removed most of its programs from mobile app stores. The agency said Beijing-based Didi had wrongly collected and mishandled personal data from its customers while seven national regulators jointly launched an investigation into the company.

The regulatory assault came just after Didi's $4.4 billion initial public offering on the New York Stock Exchange and has shattered its value, with share prices nearly halving since the early July listing.

It has also been a blow to Didi's morale as it scrambles to meet the regulators' requirements, giving smaller rivals a chance to get back in the game.

"Other apps want to grow their [market] share and it's easier to do it when Didi is weak and under investigation," said Le Tu, managing director of Beijing-based Sino Auto Insights. "When there are a lot of uncertainties, they can convince drivers and riders to move over to their service."

Just days after Didi's main app was barred from stores, food delivery giant Meituan relaunched its standalone ride-hailing app. It incentivizes passengers with lucrative coupons and attracts new drivers with cash rewards at a time when Didi is not able to expand its fleet. Meituan first launched the app in 2017 but it was folded into the company's main portal to reduce costs two years later.

T3, a two-year-old ride-hailing app backed by three state-owned auto manufacturers as well as Alibaba, Tencent and Suning, is another fierce challenger. According to an internal message posted by a T3 employee on Maimai, a LinkedIn-like platform in China, the company appears to have accelerated its expansion plan after Didi's setback.

"In the face of the rare growth opportunity, we've decided to adjust our strategy after an urgent management meeting ... We are now planning to enter 15 cities within this month and achieve a daily transaction volume of more than a million," the unverified message read.

Jeffrey Towson, an online lecturer on China's digital sector and former professor at Peking University, said: "Both the removal of Didi's apps and the IPO financials showing its negative operating profits are big welcome signs for competitors. I expect Alibaba and Meituan to jump into ride-sharing in a major way for the first time." 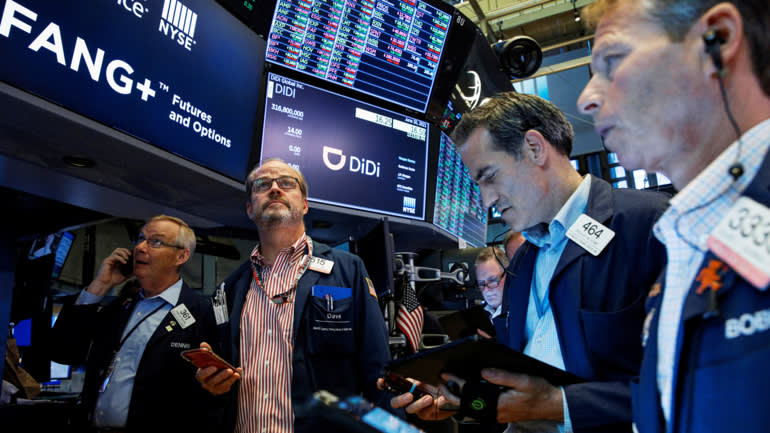 Both companies already have a presence in the sector but have not made major moves. "I think that will change now," Towson said.

Didi achieved market dominance partly through heavy user incentives, which it had been cutting over the past few years while raising prices. This has freed up the low-priced segment for smaller rivals, according to Ivan Platonov, a technology analyst at EqualOcean.

"Many upstarts charge little to nothing only to attract drivers to the platforms," he said, adding that the unavailability of Didi's programs in app stores and super apps like WeChat and Alipay would hinder further expansion

In contrast to the all-out price war seen a few years ago, newcomers now are avoiding Didi's strongholds and putting more resources into smaller cities, where Didi's presence is weaker. For example, discounts appear to be larger in smaller locales compared to cities like Beijing and Shanghai, according to several mainland passengers Nikkei has spoken to.

Drivers on Didi's platform have long complained about the company's ambiguous payment arrangements, in which Didi is accused of charging overly high commissions that leave drivers with dwindling fees. Didi responded to complaints in a WeChat post, saying that on average its drivers receive 79% of fares paid. However, in some "extreme cases," representing 2.7% of rides, Didi's commission exceeded 30%, the company said.

By contrast, other platforms are offering drivers commission-free services and more flexible terms.

A job ad on Meituan's official WeChat account shows that the company is recruiting drivers from 37 cities. In addition to cash rewards, newly registered drivers will not be charged a commission for the first seven days, according to the ad. Other platforms are offering different incentives. For example, Gaode allows drivers to select only the ride orders they like.

Wang Li, a longtime Didi driver in the eastern Chinese city of Tianjin, started to take orders from Meituan and Gaode last week. While she registered for the platforms a while ago, the rewards the two are handing out to drivers are much more lucrative now. For example, Meituan offers her a cash bonus every day after she completes the first order of the day.

"Most of us [drivers] are running multiple apps," she said.

To prevent losing more drivers, Didi also appears to be stepping up rewards. "The rewards from Didi have been quite good recently. I hadn't received any incentives from Didi for quite a while," Wang said. Didi would occasionally reward drivers who take orders during peak hours and extreme weather.

"I think the intense competition has forced Didi to take action," Wang said.

While Didi is banned from recruiting new users and drivers, analysts argue that the giant's status in ride-hailing is hard to shake.

"It will be tough to break off too much [market] share since Didi is in such a dominant position," said Le of Sino Auto Insights. "I think some share will be lost but it will not be very significant." The scale of Didi is its best defense as it can spread costs over a larger number of transactions, Le said, adding that the impact will depend on the length and outcome of Beijing's investigation.

While some passengers might be attracted to other platforms by discount coupons, eventually it is the quality of service that makes the difference, Le said.

Jay Wei, an online education teacher in Beijing, still prefers to use Didi despite the hefty discounts offered by other platforms. "The vehicles of Didi's premium service are tidier and its navigation system is more accurate," the 29-year-old said.

Even the Shenzhen tech worker Zhu has not totally ditched Didi. She said she would still call on Didi when she used up all her coupons on other platforms. "Didi is always the fastest to respond. Overall, my traveling expenses have become lower."

However, Didi's unrivaled scale will not be able to defend it forever, especially with so many uncertainties looming on the regulatory front.

In addition to the accusation of illegal personal data collection, "Didi is also a likely target for regulators given its dominance in shared mobility and the government's focus on antitrust," said Towson. For one, some drivers complained they cannot take orders from other apps while their Didi driver app is active, so they have to buy multiple phones to be able to take more orders. Didi did not respond to Nikkei's request for comment.

"Long term, Didi will have to reduce their reliance on the China market for growth, and try to build businesses and revenue outside of just ride-hailing," Le said.

Didi started its international expansion in 2018 and has entered 14 countries with thousands of workers across the rest of Asia, Africa, Europe and Latin America. Its global ambition was a big part of its pitch to investors in the lead-up to the IPO, and Didi said it will use 30% of the proceeds for overseas expansion.

However, with the recent domestic setback, analysts expect Didi to slow its expansion.

While the crackdown is not likely to directly affect Didi's operations in foreign markets in the short term, Platonov of EqualOcean said its further growth "may well be impacted by these woes."

"Didi is now less likely to grow inorganically, as acquisitions abroad are rather hard to manage under such uncertainty at home," he said. The company's access to capital, which is vital to make such deals, "seems somewhat restricted now."

Towson also believes Didi will be more cautious about high-profile expansion under the present circumstances. "Didi has been pretty surgical in terms of international expansion. I doubt there will be any new big international moves in the near future," he said.