EU turns to DJI drones for coronavirus fight despite US worries 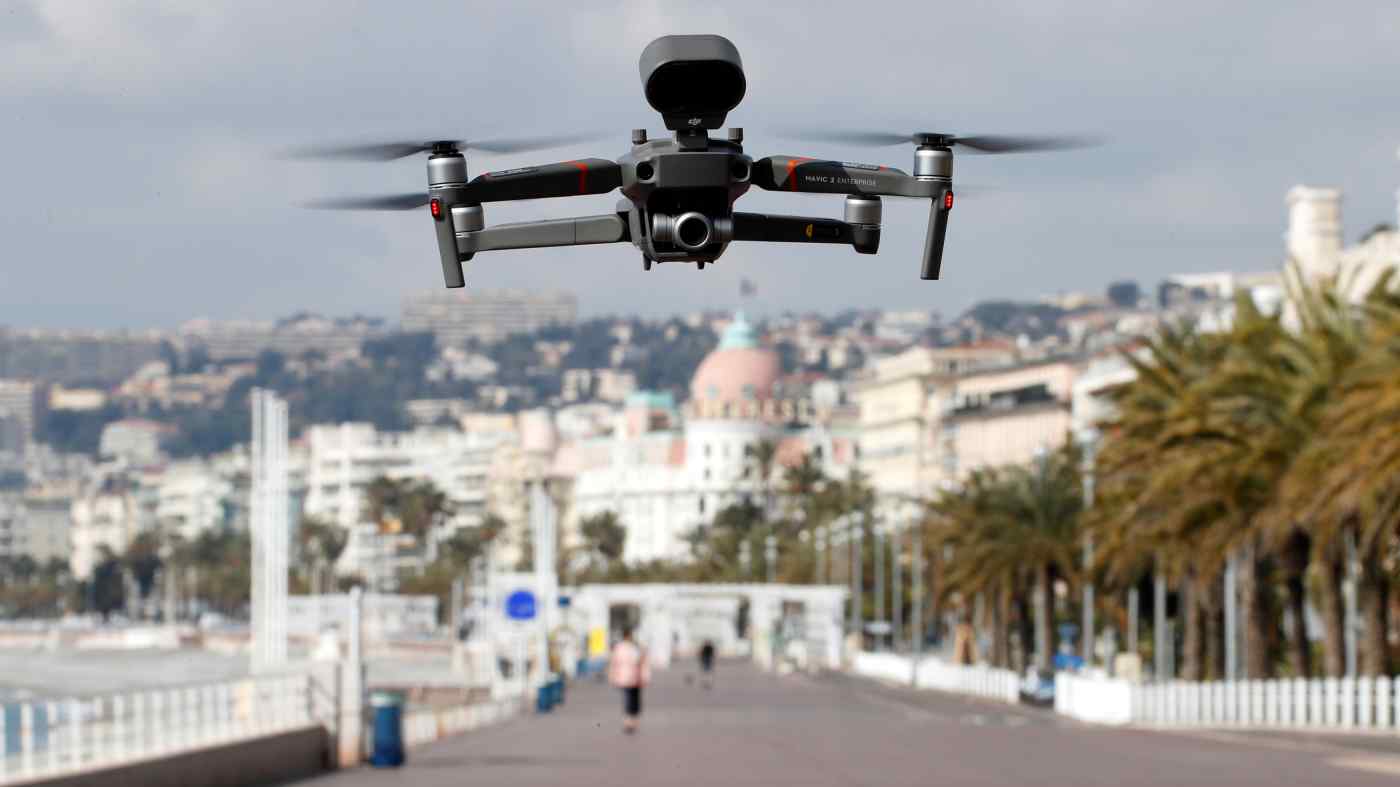 HAMBURG, Germany -- While the Trump administration is stepping up efforts to purge drones made by China's DJI Technology from government fleets as a potential threat to U.S. national security, EU authorities are embracing the company's technology to help tackle the challenges of the coronavirus pandemic.

French and Belgian police in cities such as Nice and Brussels are using speaker-equipped DJI drones to broadcast announcements about home confinement rules and conventional camera-carrying models to monitor observance of social distancing regulations. Italian police have deployed such drones to enforce controls on road movements.

Spanish authorities, meanwhile, are using agricultural models to spray disinfectant in Cordoba and other cities. Other DJI distributors on the continent are seeking to persuade government departments to buy models for taking body temperature readings or carrying virus testing samples, as was done in China.

"There are numerous European examples showing how the drones are employed to ensure the effective implementation of curfews or social distancing regulations," said Barbara Stelzner, a DJI spokeswoman in Frankfurt. "We are seeing many missions by DJI drones."

She declined to provide any sales figures, but analysts have estimated that the Shenzhen-based company controls more than two-thirds of the global market for nonmilitary drones. Commercial drone sales in Europe last year reached $361.8 million and are projected to rise this year to $544.5 million, according to data service Statista.

DJI was founded in 2006 by Chinese engineer Frank Wang Tao while he was studying at the Hong Kong University of Science and Technology. His innovative and low-cost designs set off a boom in sales to consumers interested in using the flying machines to shoot photos and videos or just play. The company is valued at $15 billion, according to venture capital research company CB Insights.

DJI, though, has come under scrutiny in Washington over worries that drone movements or recordings could be somehow be accessed by Chinese security services.

U.S. media reports have said the Trump administration is preparing an executive order that would bar federal agencies from buying or using drones from foreign companies despite moves by DJI to try to address official concerns.

The U.S. Department of the Interior grounded most of its DJI fleet last October, following an earlier move by the U.S. Army. Some federal agencies and many local ones however have continued to buy DJI drones.

"We are not expecting or experiencing any political headwinds in Europe, given that we are protecting customer data with uppermost care, that users may deactivate transmission, and that data of international users collected by DJI is stored on best-in-class servers located in the U.S.," Stelzner said.

Indeed, in Italy and other countries, officials have waived certain controls on the use of drones in urban areas to support the fight against COVID-19. A spokesman for the German interior ministry said officials are aware of alleged risks involving data transfer by DJI drones but had not seen evidence of problem.

Patrick Sensburg, a legislator for Germany's ruling Christian Democratic Union who led an official inquiry into alleged spying by the U.S. National Security Agency, told the Nikkei Asian Review that he was more concerned about intrusions into privacy by government use of drones against COVID-19 than possible Chinese espionage.

"We have to be careful not to undermine basic liberties by intruding into private space, and operating drones in public spaces above people's heads is always dangerous in the first place," he said.

Unlike their counterparts in Washington, European policymakers and publics have shown little concern to date about Chinese companies' alleged involvement in human rights abuses or possible data transfers to their government, except for Huawei Technologies, according to Rebecca Arcesati, a junior analyst at the Mercator Institute for China Studies in Berlin.

"DJI drones are being used for the surveillance crackdown on Uighurs and other minorities in Xinjiang but human rights concerns are not deeply enough integrated in EU public procurement regulations to prevent public authorities from working with DJI," she said.

"There is a much broader debate to be had about regulating data transfers to China," she added. "I think the coronavirus might actually encourage those discussions."