From smart cities to monorails, China's BYD charts next course 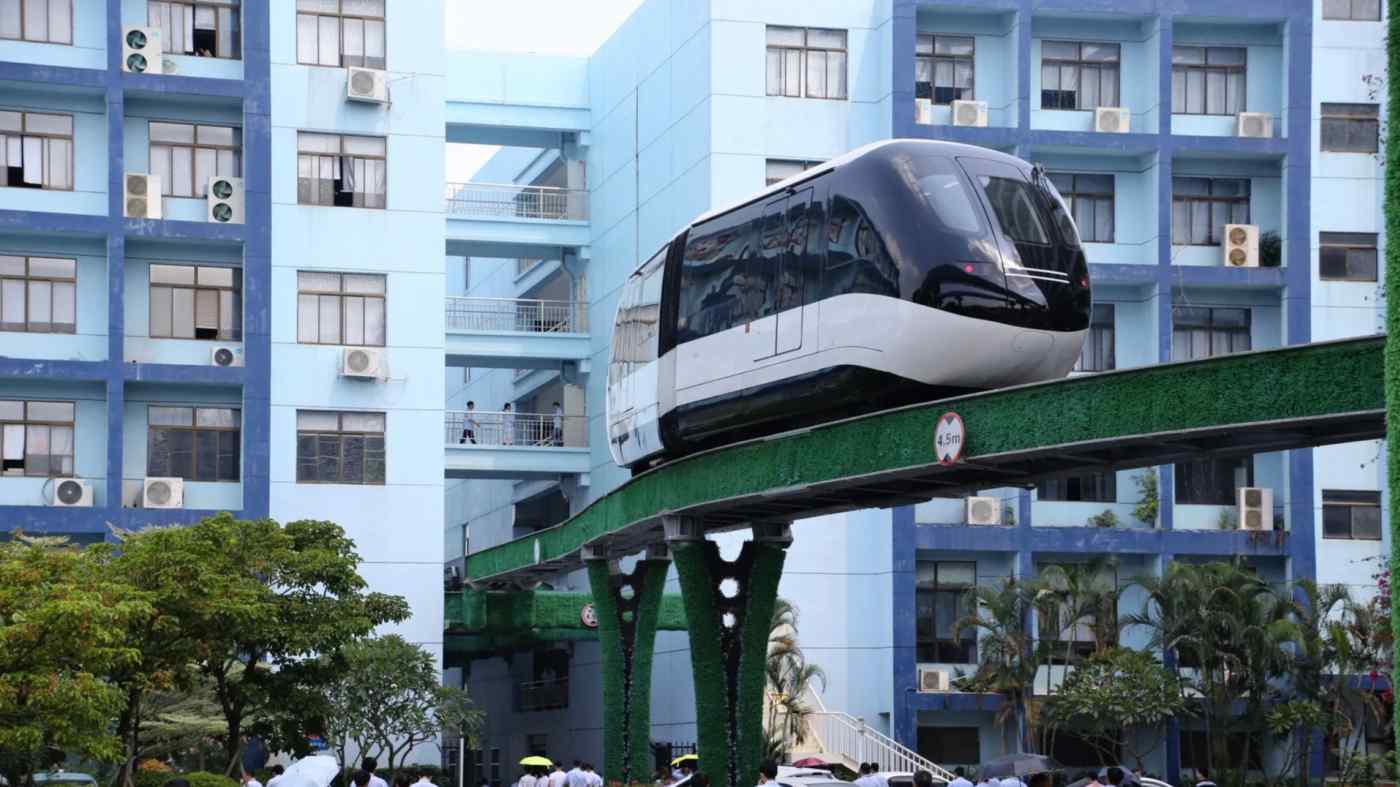 "Automobiles is just one piece of the operation," Liu Xueliang, BYD's general manager for Asia-Pacific auto sales, told Nikkei in an interview. "Our company holds other key businesses outside of autos, such as batteries, information technology and monorails."

During the decade since Warren Buffett bought a piece of BYD, the company rose from a no-name manufacturer into a high-tech powerhouse driven primarily by its dominance in EVs. But sales of electrics have nose-dived after a cut in government subsidies, forcing BYD to overhaul its business model.

The company has prepared to pivot from its flagship enterprise, ready to go on the offensive as it diversifies. A monorail dominates the BYD headquarters, in the Chinese tech hub of Shenzhen. The 4.4 km elevated line threaded through the buildings on the corporate campus, forming an infrastructure that seemed out of place at an automaker.

Called SkyRail, the monorail was the result of five years of development involving approximately 1,000 researchers brought together by BYD's chief, Chairman Wang Chuanfu.

SkyRail was first adopted in 2017 as a public works project in the inland city of Yinchuan, and the line has now entered into its operational phase. There are plans to construct the SkyRail in Brazil and the Philippines as well.

"Currently, we are in talks in over 100 cities around the world over introducing monorails," said a BYD manager. The company's sales teams are especially active in Southeast Asia and other parts of the developing world dealing with crippling congestion, the manager added.

BYD entered the monorail business by harnessing the company's energy storage technology. Not only is the SkyRail energy efficient, infrastructure costs are about a fifth of those for subways.

Recently, BYD's rank and file have been on edge concerning the future of the company. "We must shed the image that we're just an EV company," said an employee.

The company, which originally started out as a manufacturer of rechargeable batteries, launched its automotive business following a 2003 acquisition. The group later expanded to smartphones, solar-power generators and electric vehicles.

Although BYD was successful in these segments, none of the businesses could maintain sustainably high growth. Once a cash cow, sales of so-called new energy vehicles fell nearly 50% in September from a year earlier to below 13,700 units. The drop was the result of the Chinese government slashing new energy vehicle subsidies by roughly half.

The exposure to electric vehicles is apparent in BYD's finances. The company reported on Tuesday that net profit in the third quarter plummeted 89% on the year to 119.7 million yuan ($16.9 million).

The group is looking to redefine itself as a one-stop energy management company instead of a maker of electric vehicles and other individual goods. For example, BYD would be the go-to partner for creating energy-efficient smart cities.

Under that concept, BYD would supply the monorails as well as a fleet of electric vehicles. The company is pouring resources into power storage systems that would fuel smart cities. BYD sees a wide scope to do business since it has already shipped equipment to over 20 markets worldwide. There are plans to actively expand in Japan within this field in 2021.

BYD's experience in smartphones is expected to play a significant role in the smart city business. The company manufactures the devices on contract for Huawei Technologies. The expertise BYD has accumulated in fifth-generation technology can be applied to developing smart cities.

The transformation occurring at BYD has drawn the likes of Toyota Motor, which partnered with the company in July on joint battery and EV development. Japanese trading conglomerate Itochu decided recently to collaborate with BYD on recycling EV batteries into large-scale power storage systems.

In 2008, Buffett's investment house Berkshire Hathaway decided to purchase a roughly 10% stake in a company that was described by the market at the time as a no-name, rundown Chinese enterprise.

"BYD is going to be huge in electric vehicles -- they're already huge," Charlie Munger, vice chairman at Berkshire and an early advocate for the investment, said in February.

"And then they're going to be huge in monorails, which is also a business whose time has come," Berkshire's second-in-command added. "And they're also huge in... lithium batteries."

BYD is only starting its metamorphosis. Automobiles, including electrics, account for about 60% of revenue. The Chinese company still generates nearly 90% of sales domestically.

The stock market still considers BYD an EV maker, and the share price has slid 34% since its April peak. The equity value is roughly in line with what BYD was five years ago, and there is still no sign of a reversal.