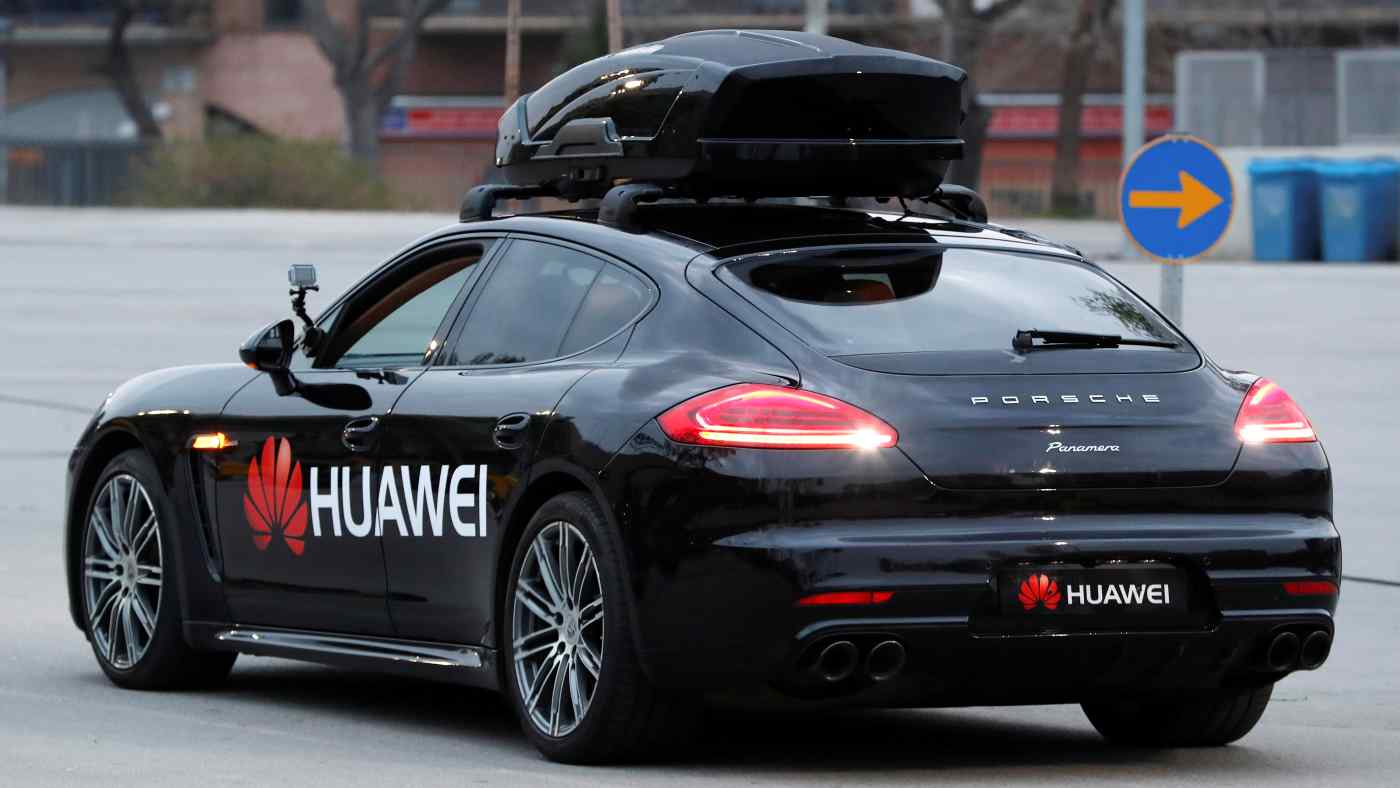 TAIPEI -- Huawei Technologies plans a big push into autonomous driving as the Chinese group ramps up competition with domestic and U.S. rivals in one of tech's next big battlegrounds.

Huawei has set an internal goal of becoming the leading Chinese platform provider for self-driving vehicles by 2025, sources told the Nikkei Asian Review. "Huawei's attitude toward autonomous driving has turned very aggressive. We have been asked by Huawei to prepare a lot of tests [this year] even if the industry is under coronavirus threats," one supplier to the company said.

The plans by the Chinese company come as it faces pressure on other parts of its business, with shipments in its core smartphone segment expected to decline this year for the first time as the coronavirus pandemic hits both global supply chains and consumer demand.

The group also faces an ongoing U.S. crackdown over allegations that its role in supplying technology for telecom networks poses a global security threat -- accusations dismissed by Huawei. Washington is considering further restricting Huawei's access to U.S. technology, including possible curbs on any of its suppliers who use American-made equipment.

Autonomous driving -- combining cutting edge software and hardware with use of "big data" and artificial intelligence -- is viewed in Beijing and Washington as a key technology that will create possibilities from smarter cities to military vehicles.

A bigger move into the field by Huawei would bring it into greater competition with U.S. companies, including Alphabet Inc.'s Waymo, Intel's Mobileye, Tesla and Apple, as well as Baidu, the Chinese search engine giant.

Huawei, which is due to report its annual results on Tuesday and declined to comment, is specifically interested in developing its autonomous driving platform, the key integrated electric system that serves as the "brain" for a self-driving vehicle. U.S. rivals like Tesla, Waymo, Nvidia, Uber and Apple also intend to have a dominant platform.

The Chinese company last summer highlighted its ability to develop its own artificial intelligence computing chip, the Ascend 910, which would "train" self-driving algorithms and facilitate the development of future-connected cars.

"Everything Apple wants to do Huawei will follow suit," said an autonomous driving expert, who requested anonymity as Huawei had approached him to work for the company. "Huawei has been planning [autonomous driving] for years, and it is very aggressive and resourceful in hiring talent to do research and development."

Huawei formed a new business unit to focus on developing smart automotive solutions last year, days after Washington put it on a trade blacklist in May. The previous year Huawei debuted its own driverless tech with its own chips, while it also announced collaborations with Audi, Toyota Motor and Groupe PSA to develop connected cars.

Huawei founder and CEO Ren Zhengfei said in a post last year on Xinsheng Community, the company's web forum, that it would focus on autonomous driving technologies, smart car connectivity and automotive computing systems instead of building cars itself.

Among the global top 10 autonomous driving standards and connectivity technology contributors, Huawei filed 66 patents, or 21%, of a total of 314 patents as of October, according to IPlytics GmbH, a market intelligence provider. This is behind LG Electronics' 81 patents but ahead of Intel's 21 and Qualcomm's 10.

However despite aggressively building up its patent portfolios Huawei has not yet been considered a leader in driverless technology. Regarding all autonomous-driving related patents worldwide, traditional carmakers Toyota Motor, Ford Motor and General Motors still own more than others, while six companies in the top 10 are from the U.S., according to IPlytics.

Baidu is the only Chinese entrant on Navigant Research's latest ranking of companies that compete in global autonomous driving technology, which considers strategy, marketing, capability and reliability -- another list dominated by American companies.

However China's edge in autonomous driving lies in access to the country's high-resolution mapping technology, a key element in developing driverless tech. China's ownership and control of the maps blocks easy entry for foreign players into the massive market.

"Autonomous driving is really a new battleground for the next generation of technologies," said Chiu Shih-fang, a tech analyst at Taiwan Institute of Economic Research who has long tracked Huawei. "The smartphone market, the biggest driver of tech innovation for the past decade, has slowed down significantly. ... So far in all types of autonomous driving technologies, U.S. companies like Google, Intel, Nvidia are still taking a big lead.

"But Huawei has an edge in communication chips and AI technologies -- the keys to enable autonomous driving. Plus it has a huge home market and government policy to support it seeking the lead in the field."