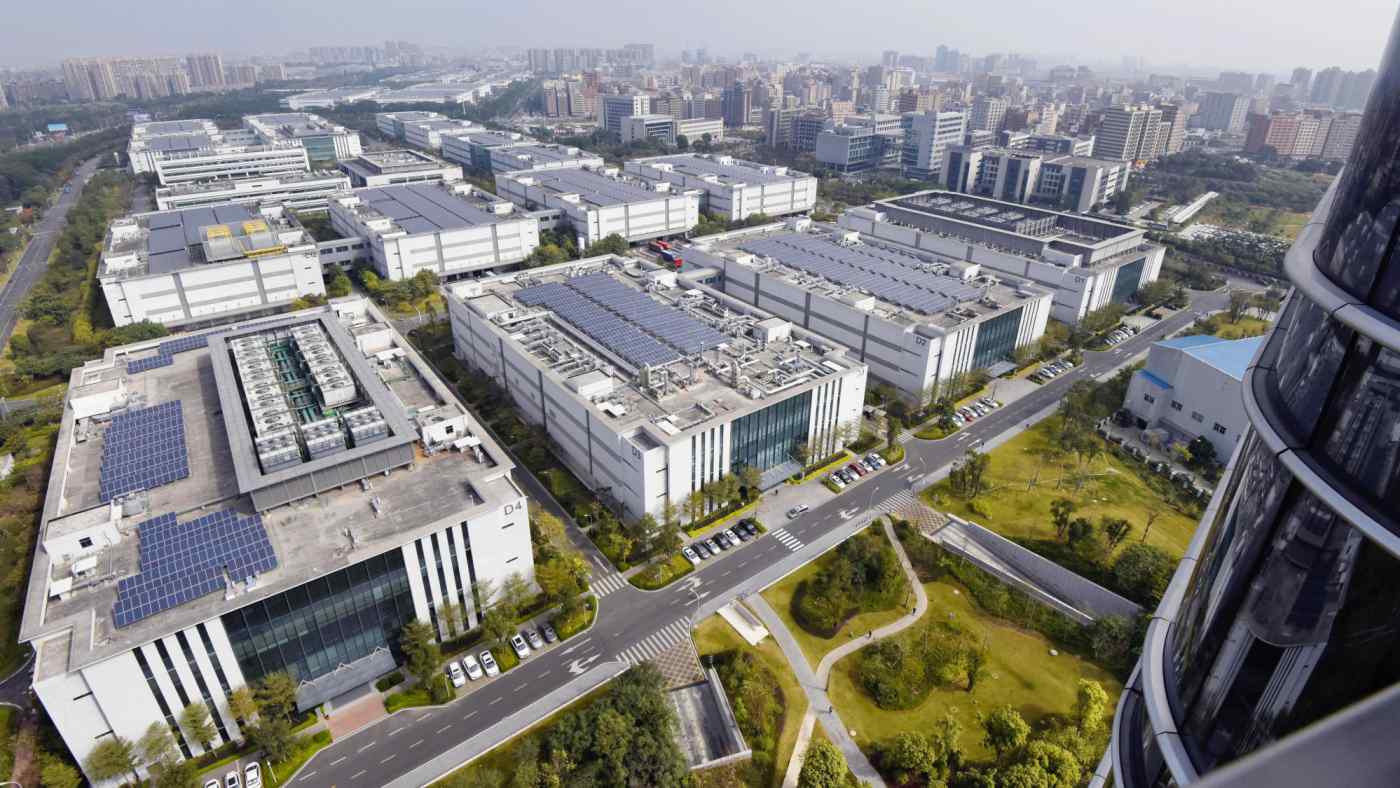 TAIPEI/HONG KONG -- Huawei Technologies is asking suppliers to move some production to China as it braces for possible restrictions on access to U.S. technology that could starve the Chinese group of components vital to its business.

Now that the company has been indicted, rather than just individual employees or executives, the focus shifts to whether President Donald Trump will impose a full-scale ban on the sale of critical semiconductors and other American-made components to Huawei.

Huawei, the world's largest telecommunications equipment business and second-largest smartphone maker, aims to minimize this risk. The company has informed suppliers such as Taiwan's ASE Technology Holding and King Yuan Electronics, its top chip packaging and testing providers, that it wants to relocate most production to sites in mainland China, industry sources told the Nikkei Asian Review.

Huawei has also talked with Taiwan Semiconductor Manufacturing Co., the world's biggest contract chipmaker, about moving some chip production to a site in the Chinese city of Nanjing, sources told Nikkei.

A similar ban last year pushed Chinese telecom equipment company ZTE to the brink of collapse before it reached a settlement with Washington. The survival of Chinese chipmaker Fujian Jinhua was put in doubt after it, too, was barred from buying from U.S. suppliers.

Many Asian suppliers hoped that Huawei would be their most valuable customer providing growth for 2019 as the smartphone market matures quickly, but those assumptions now appear riddled with uncertainties, according to supply chain sources familiar with the matter. Huawei has become a vital customer to many leading Apple suppliers such as TSMC, iPhone assembler Hon Hai Precision Industry, Taiwanese lens maker Largan Precision and U.S. chip company Micron Technology.

The charges against Huawei and Chief Financial Officer Meng Wanzhou, who was arrested in Canada last month on the request of the U.S., have raised the prospect of further earnings downgrades by suppliers after a raft of reductions due to the slowdown in the global smartphone market. 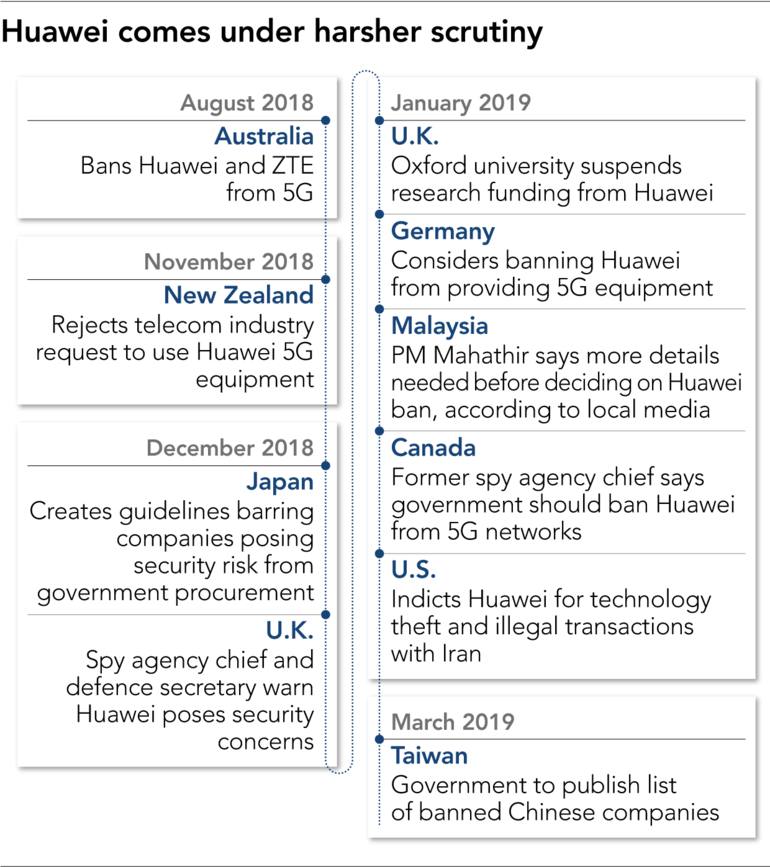 "We don't know how to make business plans for 2019," an industry source told the Nikkei Asian Review, saying Meng's arrest had brought "so many risks and uncertainties."

Another source told Nikkei that the industry would suffer an additional blow should the U.S. impose a tech ban on Huawei. "But we can do very little to change that."

Huawei's indictment alleges more than 20 violations, many that could bring fines and criminal penalties. While U.S. officials did not mention bans against Huawei on Monday, Commerce Secretary Wilbur Ross strongly hinted at some sort of trade sanction coming up.

"For years, Chinese firms have broken our export laws and undermined sanctions, often using U.S. financial systems to facilitate their illegal activities," he said. "The Trump administration continues to be tougher on those who violate our export control laws than any administration in history."

Lawyers said the U.S. government had the authority to implement a ban on American technology exports, in particular of chips or other hardware for information technology and communications products.

"The Trump administration could take this action regardless of the criminal charges in the indictment or the prosecution process," Ross Darrell Feingold, a lawyer who advises clients on trade and political risks between the U.S. and China, told the Nikkei Asian Review on Tuesday.

ASE Technology Holding, the world's biggest chip packaging and testing company, is looking into the terms of its business interruption insurance to see whether they include disruption owing to political factors, according to a source familiar with the matter.

The chairman of iPhone assembler Pegatron, Tung Tzu-hsien, told reporters on Jan. 22: "Over the past year, the impact of international political risks on the global tech industry has been unprecedented. It is the greatest that I can recall."

"We didn't have to care so much when we produced notebook computers, smartphones or integrated circuits in the past. But now we have to be extremely careful to comply with local laws in each country to avoid stepping on mines," Tung said on the sidelines of a tech forum.

"The U.S. crackdown on Chinese tech -- of which Huawei is the most important representative -- will not stop here and is likely to have a snowball effect on other Asian suppliers and on the customer end as well," Shih said. "For those who rely heavily on Huawei or China for their business, they are subject to higher political risks now."

"Suppliers could one day be forced to somewhat choose sides in the battle between the world's two biggest powers," Shih added.

Huawei, in a statement, has denied that the company or any subsidiary or affiliate committed any of the asserted violations of U.S. law set forth in each of the indictments, and also said that the company is aware of no wrongdoing by Meng. In a press statement on Tuesday, China's Foreign Ministry urged the U.S. to stop "unreasonable bashing" of Chinese companies, including Huawei, and to withdraw its arrest warrant against Meng.

Huawei has been under mounting international pressure driven by cybersecurity concerns over its technology. Governments in New Zealand and Australia banned the use of Huawei's networking technology, while many other governments are signaling they may follow suit. Taiwan is also compiling a list of products from Huawei and other Chinese companies, intending to block government employees from using them.

Many major clients of the Chinese tech company have turned their back on Huawei over the past few months. Days after Meng's arrest in Canada, leading U.K. wireless carrier BT said it would remove the Chinese company's equipment from its 4G network. Orange in France and SoftBank in Japan also plan to drop Huawei's networking devices. The boycott has spread beyond technology, with Oxford University recently saying it will stop accepting research funds or donations from Huawei.

Vodafone, the world's second-largest mobile operator, on Tuesday said it was pausing the deployment of Huawei equipment in its core networks over the concerns about security.

While many clients in Asia have refrained from comment, top Philippine mobile carrier Globe Telecom said the issue is between Huawei and U.S. authorities.

"Huawei is our partner, and all of their dealings with us are fully compliant with existing Philippine laws," Yolanda Crisanto, senior vice president for corporate communications at Globe, told the Nikkei.

In the smartphone business, where Huawei trails only Samsung Electronics in global sales, the Chinese company has not seen a widespread customer pullback, according to Peter Richardson, research director at Counterpoint Research.

"I think most distributors, including mobile operators, are keeping a close watch on developments, but we've not detected any significant moves away on the smartphone side," Richardson told the Nikkei.