In China, the fight for AI supremacy starts with the young A man checks out technology on display at the Security China 2018 exhibition in Beijing in October that year. The Chinese government sees artificial intelligence as key in its battle with the U.S. for tech supremacy.   © Reuters
NAOKI MATSUDA, Nikkei staff writerFebruary 17, 2019 14:30 JST | China
CopyCopied

The children are in a five-day training camp where they learn about artificial intelligence. The company began holding the 5,000 yuan ($740) study sessions during school holidays a few years ago. This one was fully booked soon after the company started taking applications.

It's part of a broader push in China to develop a cadre of AI engineers that can challenge U.S. dominance in high technology. The country aims to produce more sophisticated goods under its Made in China 2025 plan. That means it needs to cultivate the talent to compete with the U.S. and other developed countries.

Du Xin, who oversees NetEase’s events, said AI is critically important in today’s society, but there are not enough people who understand it. She hopes the camps will spark children's interest. Tencent Holdings and other Chinese internet companies have similar programs.

Yang Mei, the mother of one attendee, said she would spare no expense for her 10-year-old son's future. 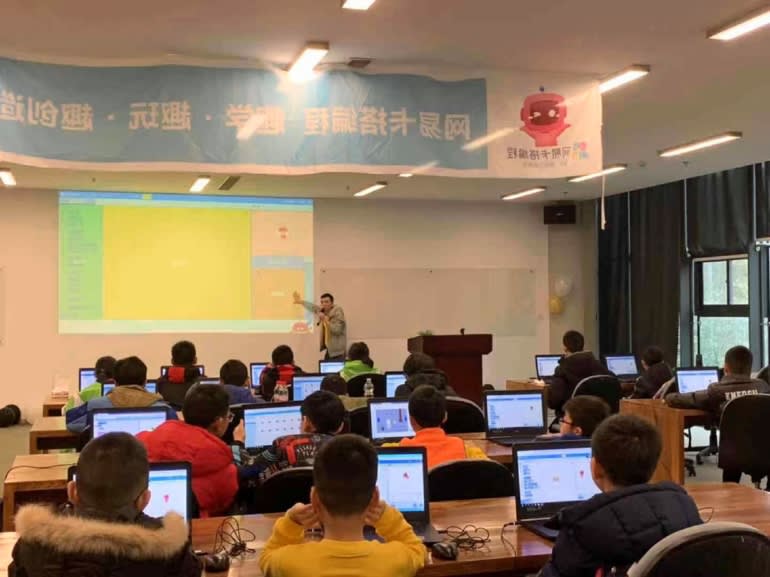 AI is the latest subject to catch fire in the business of educating China's kids. Many language schools in Shanghai now tout AI courses, along with English and Japanese classes. Wang Hao, a homemaker in Shanghai, sends her elementary school-age son to AI classes. She has heard that AI-related jobs are popular and well-paid.

The average salary of AI engineers now hovers around 29,000 to 33,000 yuan a month, and has been rising every year, according Boss Zhi Pin, a Chinese employment website. A typical office worker earns about 12,000 yuan in Beijing and about 10,600 yuan in Shanghai.

The same competitive drive that has parents in Shanghai sending their kids to AI camp animates policymakers in Beijing. China is concerned that the U.S. is far and away the leader in terms of training AI engineers. Of the roughly 1.9 million engineers worldwide, about 850,000 are in the U.S. China has only around 50,000, according to a survey by the Chinese unit of LinkedIn, a social media site for job hunters. About 370 universities around the world train AI engineers. Roughly 170 are in the U.S., while China has 20 or so, according to a survey by Tencent in 2017. Universities in Beijing and Shanghai are particularly important, with about 60% of China's engineers coming from the two cities.

Many Chinese AI engineers are educated in the U.S., but China is eager to foster homegrown talent. The trade friction with Washington may make it harder for Chinese science and technology students to get U.S. visas.

The Chinese government and private companies are hoping to gain ground by introducing the subject to schoolchildren. AI textbooks for elementary and junior high school students have been published recently, and hundreds of elementary, junior high and high schools in Shanghai and elsewhere are scheduled to introduce AI classes this spring.

Last September, Vice Premier Liu He, President Xi Jinping's economy czar, emphasized at the World Artificial Intelligence Conference in Shanghai that AI is essential to many fields and said the government will support its development. For as long as the government sees AI as key to its battle with the U.S. for tech supremacy, the boom in AI education is likely to continue.