Inside Tsinghua Unigroup, a key player in China's chip strategy 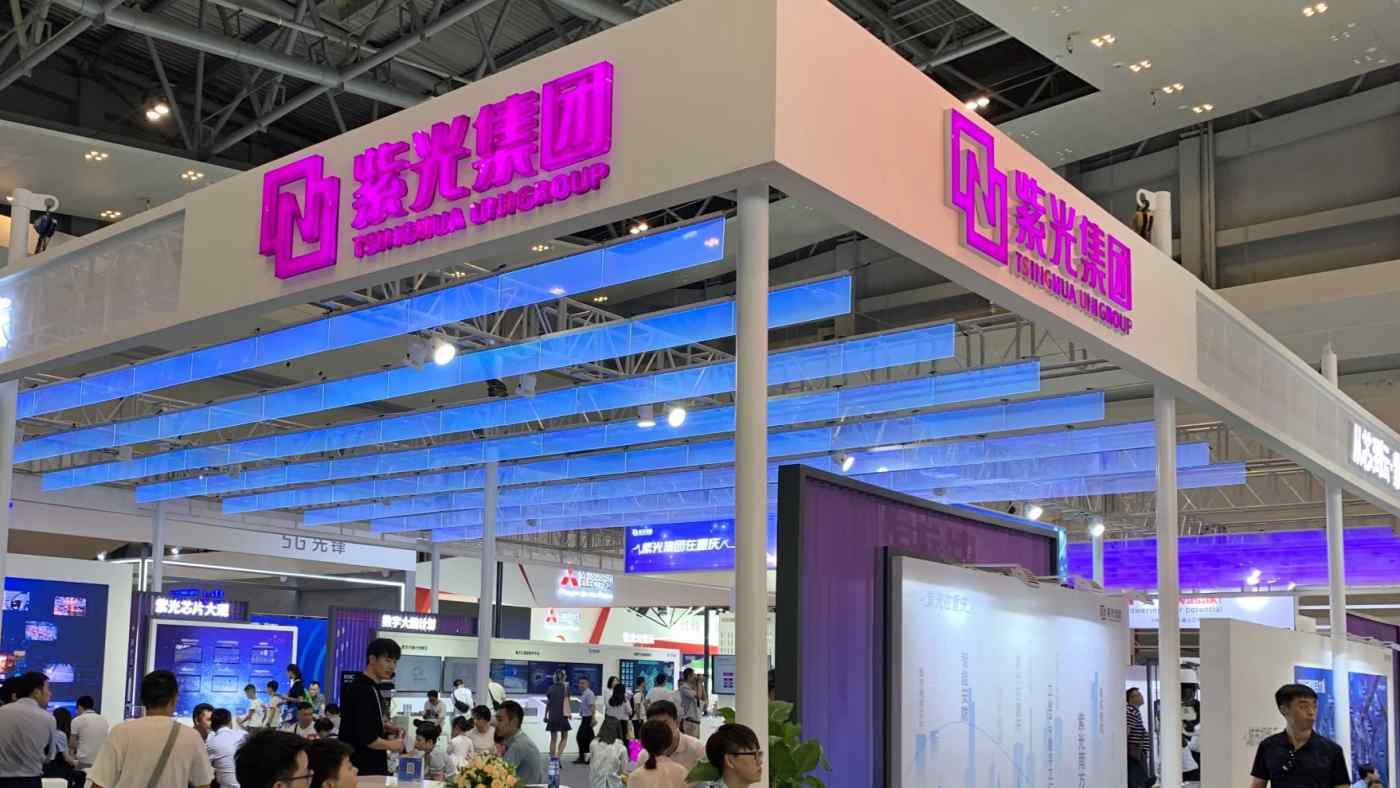 The China International Semiconductor Expo (IC China 2020) held in Shanghai from Oct. 14 to 16 had many exhibition booths with signs reading "domestically produced" or "made in China."

In October, the U.S. imposed restrictions on exports to Semiconductor Manufacturing International Corp. (SMIC), China's biggest semiconductor foundry, following those slapped on Huawei Technologies, making it more likely that China will be still further isolated and cut off from international chip supply chains.

American research company IC Insights said in a report in May that the rate may rise only to 20.7% in 2024. Although the government's goal does not stand a chance, China is more resolved than ever to develop its homegrown chip sector.

At the IC China expo held under these circumstances, an overwhelmingly large booth was occupied by Tsinghua Unigroup, a chipmaker affiliated with Tsinghua University, a top-notch Chinese engineering university and alma mater of President Xi Jinping.

Tsinghua Unigroup thus emphasized that it is capable of offering cutting-edge products for a variety of applications.

Based on Tsinghua University Science and Technology Development Corp., Tsinghua Unigroup was founded in 1993. Entering the chip industry through the 2013 acquisition of Spreadtrum Communications, which was the second-largest Chinese fabless company, it has since grown rapidly to become the leader in China's chip industry and holds the key to the nation's drive to raise its self-sufficiency in chip production.

Though lagging far behind Japanese, American and European competitors, it is building huge memory chip plants in China.

According to Chinese corporate information site Tianyancha, Tsinghua Unigroup is 51% owned by Tsinghua Holdings, a wholly owned subsidiary of the university, and 49% by Beijing Jiankun Investment Group. Zhao Weiquo, founder of the investment company, has been chairman of Tsinghua Unigroup since 2009. Zhao Weiquo, nicknamed "Starved Tiger," has been chairman of Tsinghua Unigroup since 2009.   © Reuters

To understand Tsinghua Unigroup, it is necessary to look back on Zhao's eventful life to date.

Zhao, who has earned the nickname "Starved Tiger," was born in the Xinjiang Uighur Autonomous Region in 1967. However, he is not a Uighur but a Han Chinese.

After the Cultural Revolution, which had a decisive role in China's modern history, started in 1966, Zhao's parents were sent to Xinjiang as "rightists." In an interview with Taiwanese magazine Business Today, Zhao recalled how he had fed pigs and raised sheep during childhood. The revolution was declared finished in 1977.

Zhao enrolled at Tsinghua University in 1985 and received a master's degree in electronic engineering. Encouraged by the growth of Apple, Hewlett-Packard and other Silicon Valley companies, he began to work as an engineer and vice president at a private company in 1990.

In December 2004, Zhao founded Jiankun Investment and became chairman. The company earned huge profit on the growth of China's property market, which allegedly helped its capital of 1 million yuan ($15,000) soar to 4.5 billion yuan through investment in, among other things, real estate in Xinjiang. The company was also reported to be investing in natural gas and information technology.

Jiankun Investment bought the 49% stake in Tsinghua Unigroup in 2009, and Zhao became chairman of the company. The purchase evidently was possible because Zhao was already well known and appreciated among people connected to the university.

In light of conditions in China, the authorization of investment in a company like Tsinghua Unigroup suggests Zhao had a deep involvement in politics. In the interview with the Taiwanese magazine, Zhao admitted that Hu Haifeng, the son of former President Hu Jintao, was an ex-colleague of his, but denied that their relationship was close or that leaders were among his close friends.

Moves by Tsinghua Unigroup since its entry into the semiconductor sector have been perfectly linked to China's national chip strategy. After the 140 billion-yuan National Integrated Circuit Industry Investment Fund was formed with direct investment from the Ministry of Finance in the autumn of 2014, a company under the wing of Tsinghua Unigroup was chosen as an investment destination. In 2015, China announced the ambitious "Made in China 2025" strategy, including the target of raising the nation's self-sufficiency in chip production to 70% by 2025.

Tsinghua Unigroup has since 2015 been a key player in the global reorganization of the chip industry. Leveraging strong financial leeway backed by the Chinese government, it has invested in or showed willingness to acquire leading foreign chipmakers such as Micron Technology and Western Digital of the U.S., SK Hynix of South Korea and MediaTek of Taiwan.

But most of Tsinghua Unigroup's attempts fell through due to opposition by foreign governments concerned about the rise of China. Tsinghua Unigroup thus decided to allocate its huge funds to domestic projects, announcing plans to build manufacturing plants for flash memory chips and DRAMs -- indispensable for production of smartphones and personal computers -- in Wuhan, Nanjing, Chengdu and Chongqing.

Yangtze Memory Technologies Co. (YMTC), a flash memory chip producer belonging to Tsinghua Unigroup, has a plant in Wuhan. Even under the strict coronavirus pandemic lockdown, YMTC kept increasing its production capacity and reinforcing the development of products at the plant.

The 128-layer, 3D flash memory chip displayed by Tsinghua Unigroup at IC China was unveiled about a week after the lockdown was lifted. This indicates that Tsinghua Unigroup was promoting product development even amid the pandemic in a bid to catch up with Samsung Electronics of South Korea and Japan's Kioxia Holdings.

Tsinghua Unigroup is also constructing a flash memory factory in Chengdu, Sichuan Province. If the company can raise production and achieve competitive costs, it is unlikely to have trouble with finding demand because its products are expected to be preferentially adopted by domestic users including the government. Coupled with its financial prowess, Tsinghua Unigroup may well rapidly expand its market share in a few years.

DRAM has been a hurdle for the Chinese chip industry because it requires a more complicated production process than flash memory. Although Fujian Jinhua Integrated Circuit Co. (JHICC) and ChangXin Memory Technologies (CXMT) showed willingness to develop and mass-produce DRAM chips, JHICC is still unable to go beyond the production of samples, as it has lacked support from manufacturers of chipmaking equipment since the U.S. Department of Commerce put it on the Entity List in 2018 as a company posing a threat to national security.

In 2016, Sino King Technology, headed by Sakamoto, attempted to start mass production of DRAM chips in cooperation with the Hefei municipal government in Anhui Province, but in vain. Tsinghua Unigroup will be unable to reach the goal without experienced and competent manpower. It has recruited Sakamoto to make use of his name recognition and human network to scout such talent.

China's lack of core semiconductor technologies, such as extreme ultraviolet lithography exposure equipment and materials, is a "technological problem allowing Western countries to have our lives in their hands," Bai Chunli, president of the Chinese Academy of Sciences, said in September. "We will gather elite troops to settle the problem," he stressed.

Also there is some uncertainty. Listed bonds issued by Tsinghua Unigroup plunged on Tuesday after a local credit agency voiced concern over the state-backed conglomerate. Beijing-based China Chengxin International Credit Rating, or CCXI, said on Nov. 5 that it had placed the company under watch for a possible downgrade from its current triple-A rating.

But attention should be paid because Chinese markets for chip applications, even if they do not require cutting-edge technologies, are big enough. The decoupling of semiconductor supply chains, created under U.S. pressure, is undeniably prompting the Chinese chip industry to pursue its independence from foreign suppliers.

In addition to their large presence and ample financial support from the government, China's unwavering resolve to let its chipmakers stand on their own makes it necessary to consider when -- rather than whether -- China can catch up in the chip industry.