JD.com's opening in Hong Kong could boost the hopes of other mainland Chinese companies that are queuing up either for an initial public offering or a secondary listing, amid threats from Washington of being pushed out of U.S. exchanges.   © AP
NARAYANAN SOMASUNDARAM, Nikkei Asian Review chief banking and financial correspondentJune 18, 2020 12:47 JSTUpdated on June 18, 2020 18:50 JST | Hong Kong
CopyCopied

HONG KONG -- JD.com shares rose 3.5% on their Hong Kong trading debut on Thursday after the company raised as much as $3.88 billion in the city's largest listing so far this year, sending an encouraging signal for companies lining up to raise capital.

The trading debut coincided with the conclusion of JD.com's largest annual sales event, which began June 1. Buying volumes for the "618" festival had reached 239.2 billion yuan by mid-afternoon, according to the company, which has its primary listing on the Nasdaq.

JD.com's debut in Hong Kong came a week after Chinese game developer NetEase jumped 5.7% in its own secondary trading start in the city. NetEase shares ended Thursday 1.1% lower at HK$126.70 but remain above their offering price of HK$123.

NetEase and JD.com followed Alibaba Group Holding in picking Hong Kong for secondary listings. JD.com's strong opening could boost the hopes of companies that are lining up either for an initial public offering or a secondary listing amid threats emerging from Washington about pushing Chinese companies off of American exchanges. 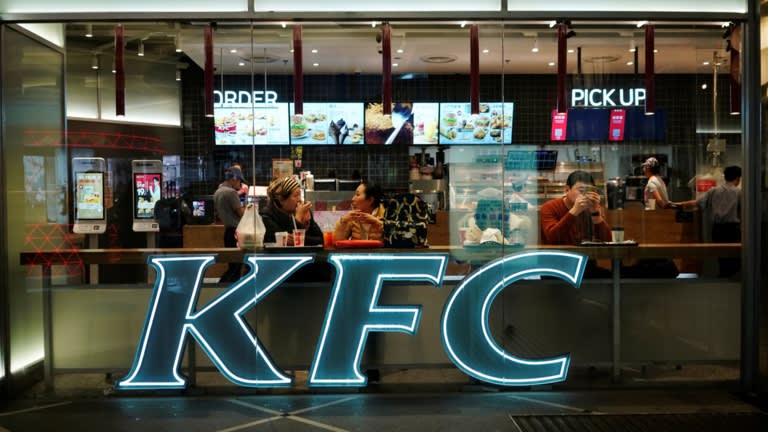 A KFC restaurant in Shanghai. NYSE-listed Yum China Holdings, which operates KFC and other restaurants, has invited banks to pitch for lead manager roles for a possible secondary listing.   © Reuters

Search giant Baidu, which trades on the Nasdaq, is among U.S.-listed Chinese companies considering an offering in Hong Kong while New York Stock Exchange-listed Yum China Holdings, which operates KFC, Pizza Hut and Taco Bell restaurants in the mainland, has invited banks to pitch for lead manager roles for a possible secondary listing, people familiar said.

Other Chinese companies currently assessing investor demand for IPOs in Hong Kong including Zhenro Services Group, the property management unit of Zhenro Properties Group, e-cigarette device maker Smoore International Holdings and surgical instrument maker Kangji Medical, which is moving ahead with raising up to $404 million and is backed by private equity group TPG.

Chinese companies are tapping Hong Kong's market after the U.S. Senate last month approved a bill that could force mainland companies to delist if they fail to comply with U.S. regulatory standards for three consecutive years. Currently, foreign companies are subject to a lower standard of scrutiny. The bill awaits approval by the U.S. House of Representatives.

"We think the standoff between the U.S. and Chinese regulatory authorities will force many Chinese companies to first think about a dual listing in Hong Kong or elsewhere, and wait to see how the final law will be written," Citigroup said in an investor note.

About 42 Chinese companies trading on U.S. stock exchanges qualify for listing in Hong Kong. If they issue 5% of their outstanding shares in Hong Kong, it would amount to capital raising of $27 billion, UBS analysts said in an investors' note.

Some 354 companies of Chinese origin have listed in the U.S. since 1993, raising a total of $88.5 billion, according to Citigroup. Over the years, 107 of them have been delisted and the current market value of the remainder stands at $1.5 trillion.

Just this month, 58.com, often called the Craigslist of China, and BitAuto, an automobile information provider, agreed to buyouts that would delist them from the NYSE.

So far this year seven Chinese companies have delisted from U.S. exchanges, the most since 2016, according to data compiled by Dealogic.

JD.com's secondary offering was multiple times subscribed, with the retail portion alone attracting bids worth 179 times the shares on offer, pushing the company to allot the maximum 12% of the offer to such investors.

The company's shares closed at $62.01 in New York on Wednesday, valuing the company at $92 billion. Two JD.com Hong Kong shares are equivalent to one American depositary receipt.