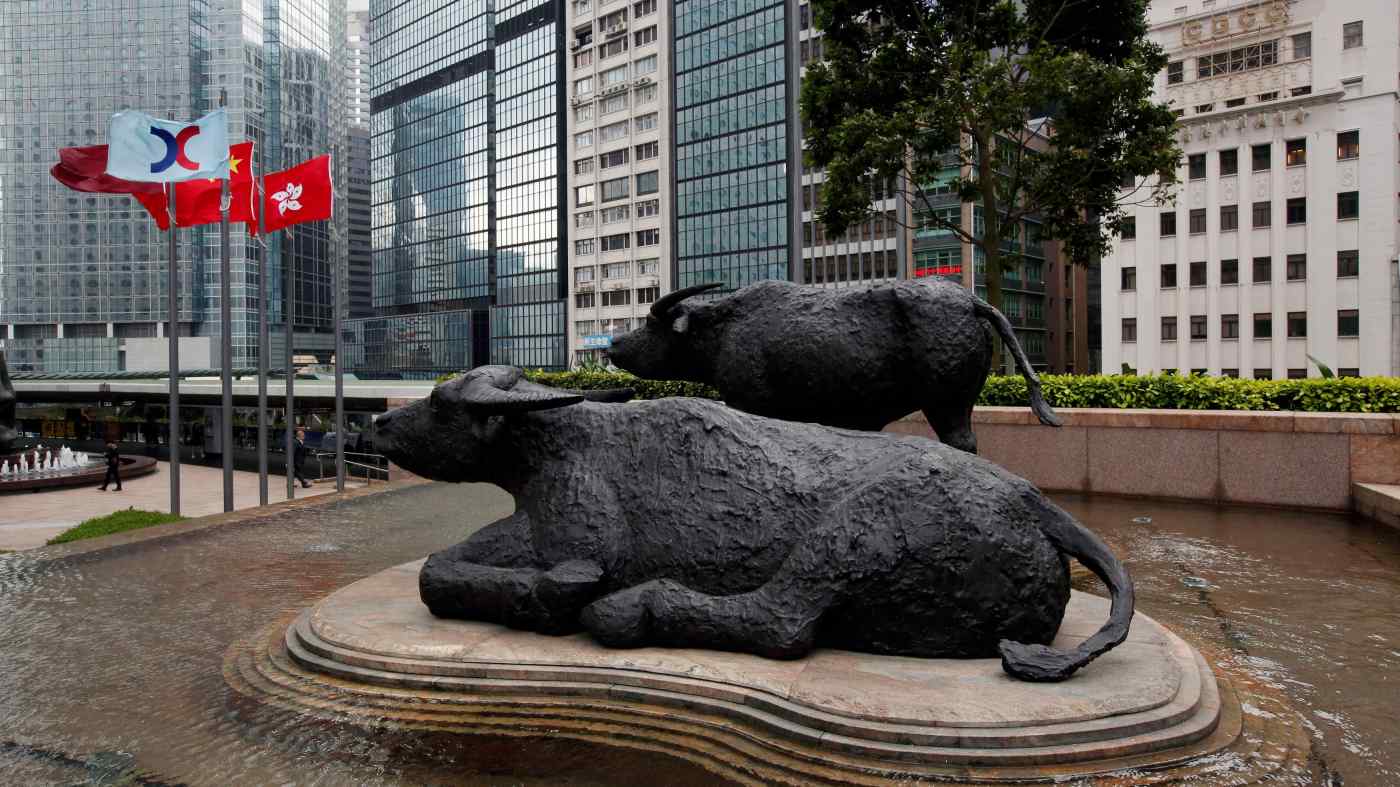 About 42 Chinese companies trading on U.S. stock exchanges qualify for listing in Hong Kong. UBS says that if they issue 5% of their outstanding shares on the Hong Kong Stock Exchange, it would amount to capital raising of $27 billion.   © Reuters
NARAYANAN SOMASUNDARAM, Nikkei Asian Review chief banking and financial correspondentJune 11, 2020 11:53 JSTUpdated on June 11, 2020 18:17 JST | Hong Kong
CopyCopied

HONG KONG -- Chinese game developer NetEase's shares surged 5.7% on their trading debut in Hong Kong on Thursday, after raising at least $2.7 billion for its secondary listing, while online retailer JD.com priced its offering on the city's exchange at a narrow discount to its New York close.

The dual developments could encourage a string of other U.S.-listed mainland companies to line up for secondary offerings on the Hong Kong Stock Exchange amid threats from Washington of being pushed out of American exchanges.

NetEase shares opened at 133 Hong Kong dollars ($17.16), compared with the issue price of HK$123. The shares rose as high as HK$135.20 in early trading, but ceded gains in the afternoon to close at their intraday low of HK$130. The benchmark Hang Seng Index ended the day 2.3% lower in line with global equity weakness after the U.S. Federal Reserve on Wednesday flagged a long, drawn out economic recovery.

NetEase's American depositary receipts on the Nasdaq closed up 3.8% at $424.98 on Wednesday. One ADR represents 25 Hong Kong shares.

Separately, JD.com is set to price its Hong Kong offering at HK$226, or 3.9% lower than its New York close, to raise $3.88 billion, people familiar with the deal said. The offer was multiple times subscribed, with the retail portion alone attracting applications that exceeded the shares on offer by 40 times, these people said. NetEase and JD.com could encourage a string of other U.S.-listed mainland companies to line up for secondary offerings in Hong Kong amid delisting threats from Washington. (Source photos by Getty Images and Reuters)

Equity listings in Hong Kong sap liquidity from the city's financial system because retail applications, which typically are heavily oversubscribed, require money up front. That can temporarily divert hundreds of billions of Hong Kong dollars toward a small lot of shares before a large listing, which also strengthens the currency.

NetEase's retail offering was 360 times subscribed. That prompted the company to increase the allocation to retail investors to 20.58 million shares from 5.15 million planned originally, it said in a statement to the exchange. That allocation means the retail proportion accounts for about 12% of the offering, it said.

Chinese firms are tapping Hong Kong after the U.S. Senate last month approved a bill that could force mainland companies to delist if they fail to comply with U.S. regulatory standards for three consecutive years. Currently, foreign companies are subject to a lower standard of scrutiny.

"We expect to see a fractious relationship in the medium term between the U.S. and China," Paras Anand, chief investment officer for Asia Pacific at Fidelity International, said in a webinar on Thursday. "Repatriation of listed Chinese companies from the U.S. to Hong Kong is going to be a meaningful and structural trend."

About 42 Chinese companies trading on U.S. stock exchanges qualify for listing in Hong Kong. If they issue 5% of their outstanding shares in Hong Kong, it would amount to capital raising of $27 billion, UBS analysts said in an investors' note.

In a sign of further confidence in the Hong Kong equity market, China Bohai Bank, in which Standard Chartered owns a 20% stake, won listing approval from the stock exchange for a $2 billion initial public offering, people familiar with the transaction said. The bank will hold investor discussions next week.

Investor demand for IPOs also is boosting the appetite for Hong Kong's currency.

The Hong Kong Monetary Authority, the de facto central bank, has intervened several times this year, including twice this week, as the currency strengthened to its trading limit. The Hong Kong dollar is tightly pegged to the greenback at 7.75-7.85 per U.S. dollar, and the HKMA maintains that range by intervention.

Hong Kong's linked exchange-rate system was introduced in 1983 to halt a rapid fall of the currency, which was free-floating at the time, as the U.K., which then ruled the territory, discussed the city's future with China.

The peg has become a widely discussed topic during times of economic stress, with several fund managers betting on its demise over the years, only to retreat.

Hedge fund manager Crispin Odey wagered against the peg for more than two years before giving up in 2018. Investor and philanthropist George Soros attempted -- and failed -- to break the peg during the Asian financial crisis in 1998, while hedge fund manager Bill Ackman's bet on an appreciation of the Hong Kong dollar in 2011 also met a similar fate.

Kyle Bass, the Dallas-based founder of Hayman Capital Management, last year bet the peg would collapse amid violent anti-government protests. He is starting a new fund that will make all-or-nothing wagers on a collapse of Hong Kong's currency peg, Bloomberg reported this week, citing sources.

The strategy is either designed to generate outsized gains if Hong Kong's currency tumbles against the U.S. dollar or lose it all if the peg is still intact after 18 months, the report said.

The currency was trading at 7.7505 against the U.S. dollar on Thursday.