GUANGZHOU/TOKYO -- Tech startups in Shenzhen, known as China's Silicon Valley, are set to experience a range of outcomes as the novel coronavirus pandemic appears to near its end, with some seeing their businesses thrive while others face headwinds following significantly reduced investment.

The companies that are emerging strong from the crisis include those offering technologies, such as artificial intelligence and robotics, that can both support economic recovery and help prevent the spread of infection. They have the potential to drive innovation in a new society in which we must coexist with the virus.

"The new coronavirus infection has largely run its course, but people are still distancing themselves from each other," said Tang Weihe, a manager at AICROBO Technology (Shenzhen) which develops robots that move items in factories and warehouses.

The company, whose customers include Foxconn Technology Group, a subsidiary of Taiwan's Hon Hai Precision Industry, has seen domestic orders for its robots increase by 30% compared to last year recently.

"We have plans to expand business in Japan and South Korea," Tang said. Shenzhen, home to a large electronics component industry, has many tech companies. Nearly 20% of the unicorns, or privately held startups valued at more than $1 billion, in Guangdong Province, which includes Shenzhen, are in the robotics and hardware business, compared to 4% for China as a whole.

According to Zero2IPO Research Center, venture capital investment in China as a whole for the three months to March decreased about 40% from a year ago to 25.1 billion yuan ($3.52 billion).

However, Mitsuhiko Hatano, a general manager of Mizuho Bank's China operations with knowledge of the financing situations of Chinese tech startups, said: "Shenzhen has many companies that have advanced technology, and they have been able to raise funds even after the coronavirus infection spread."

Increases in the number of people infected with the coronavirus have slowed in China, and corporate activities have mostly returned to normal after starting to open up in March. For Shenzhen's startups, the government's all-out effort to prevent a second wave of infection has proved to be a major boost.

Malong Technologies is receiving inquiries from retailers in China as well as abroad. The company's image recognition technology, which can accurately identify products held up by customers, is used to allow checkout terminals in stores to be automated.

Shenzhen Dorabot, which develops picking robots that can sort parcels, has seen a surge in demand for its robots and has bolstered its sales force to expand its customer base. 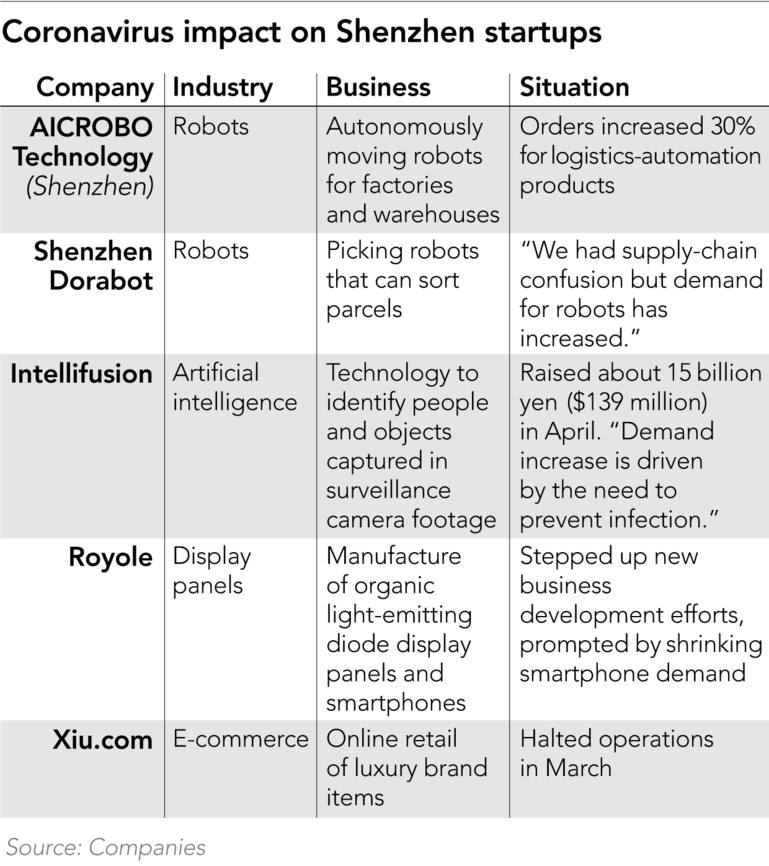 Intellifusion, which has the technology to identify people or objects captured in surveillance camera footage, in April successfully raised total 1 billion yuan ($140 million). The company is receiving increased orders for a system that efficiently measures the temperature of the human body from customers seeking to use it for infection-prevention measures, said a company spokesperson.

On the other hand, Xiu.com, a luxury online retailer, was forced to halt its operations in March. Until just a few years ago, the company was enjoying a growing reputation as a promising e-commerce operator, raising a total of $150 million from investors including venture capital firms.

But amid the pandemic, it has seen a drop in demand and is experiencing difficulties sourcing products.

While the new coronavirus pandemic appears to be nearing its end in China, the future of the country's economy remains uncertain with many financial industry insiders fearing the situation might push vulnerable startups over the edge.

Still, according to Akio Tanaka, managing partner in charge of China investment at Tokyo's Infinity Ventures, startup investment in China is recovering faster than in the U.S., where lockdowns lasted until April.

"Innovative technologies born in China may not immediately gain a global presence," Tanaka said, explaining that strict government censorship has led China to build a unique internet infrastructure. But in the long run, he said, Chinese companies "will be able to export their business models to the world as Chinese economic power gradually expands."