Scheme is part of China's high-tech and rural transformation drives SHANGHAI -- A recent 5G upgrade is both benefiting and bemusing residents of a small village near Shanghai.

"What 5G?" said a convenience store owner in Zhongbu, about 30 km from the center of the metropolis. "Most of the folks here carry a smartphone that works just fine on 4G."

"My eyesight is poor," an elderly man told Nikkei Asia on a recent visit. "I hardly use my 4G phone unless I need to call my kids."

Zhongbu was recently designated Shanghai's first "5G village." Some 600 households within the 3.67-sq.- kilometer village have been promised faster connections and less lag time for downloads with 5G. Smart bracelets have been handed out to older people to indicate their whereabouts and health status.

The scheme is part of China's high-tech and rural transformation drives, although most people in the village are content with the existing infrastructure. In particular, 5G development is expected to accelerate over the next two to three years, according to a policy paper released last month by China Academy of Information and Communications Technology, a think tank that operates under the Ministry of Industry and Information Technology.

The expansion is line with the country's "dual-circulation" development strategy aimed at achieving an innovation-driven economy, and moving away from one focused on exports and investment.

China already has a high mobile penetration rate. Its three largest operators had a combined 1.6 billion users as of the end of November, including 1.292 billion 4G users, according to official data. But industry players want 5G to be standard network for smartphones, touting faster download speeds and benefits for sectors such as online health care.

Village officials in Zhongbu told state media that some 30 newly installed 5G-enabled features, including smoke detectors and surveillance cameras, would keep the commune "free of thieves."

"I may consider upgrading to a 5G phone for entertainment in the future," said a woman who identified herself as Shi.

"With the 5G-enabled smart bracelet, my mother can alert me anytime," a woman in Zhongbu said on state TV last month. 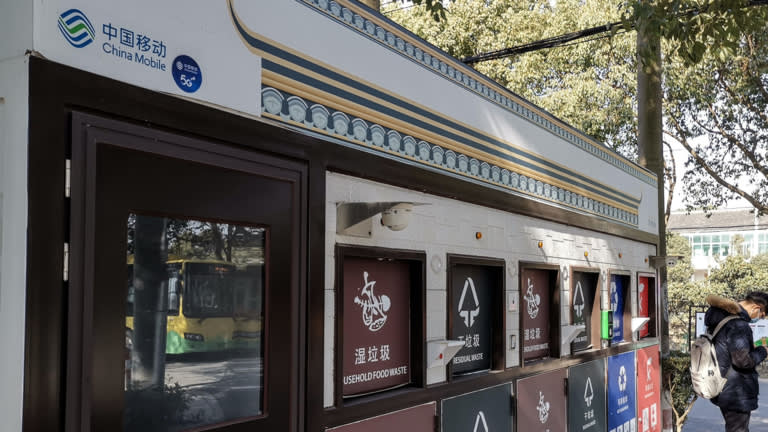 Recycle trash bins in Zhongbu village. They can only be opened after scanning a QR code with a mobile phone. Users can collect points in exchange for cash to promote recycling habits. (Photo by CK Tan)

Despite cities such as Beijing and Shenzhen having full 5G coverage, most mobile apps are optimized for 4G devices. Even so, there will be 650 million 5G users in China by 2023, up from 160 million in 2020, according to an estimate by Daxue Consulting in Shanghai.

But this is only a fraction of the 10 million base stations needed to cover the entire country, according to an estimate by China Unicom Research.

Despite shortfalls in coverage and apps, 5G smartphone shipments continue to rise, accounting for 51% of the 281 million units sold in the first 11 months of 2020.

"The 5G village serves as a good example of possible 5G applications, hinting to where investments might go in the future in terms of application development," said Thomas Zhang, head of research at Uzabase, a Japanese media company, in Shanghai.

CAICT said some 80% of 5G applications set for rollout in coming years will be aimed at industry, with the rest focused on consumers. Economists expect semiconductors, smart devices and autonomous vehicles to be among 5G-related sectors that will drive domestic demand.

Chinese policymakers are attempting to circumvent the impact of U.S. sanctions imposed against technology its companies, notably Huawei Technologies and ZTE.

Chinese companies will continue to face barriers to the most advanced foreign technologies, even under the Biden administration, Nomura said in a Jan. 6 note. "In the long-run, Huawei and other tech firms in China will have to make breakthroughs in advanced technologies, for example mmWave, to support the 5G network upgrade."

In the face of this pressure, Huawei and ZTE have focused on domestic 5G projects, accounting for nearly 90% of their market share, the report said. Alibaba Group Holding will invest 200 billion yuan over three years, and Tencent will spend 500 billion yuan over a five-year period to improve 5G-related services, build new data centers, and develop chips and equipment, according to CAICT.

Extending 5G technologies beyond the cities and introducing them as part of the policy to modernize villages are among the government's development goals.

"From a strategic perspective, only by achieving rural vitalization will the dream of national rejuvenation be fulfilled," President Xi Jinping said on Dec.28 at rural work conference.