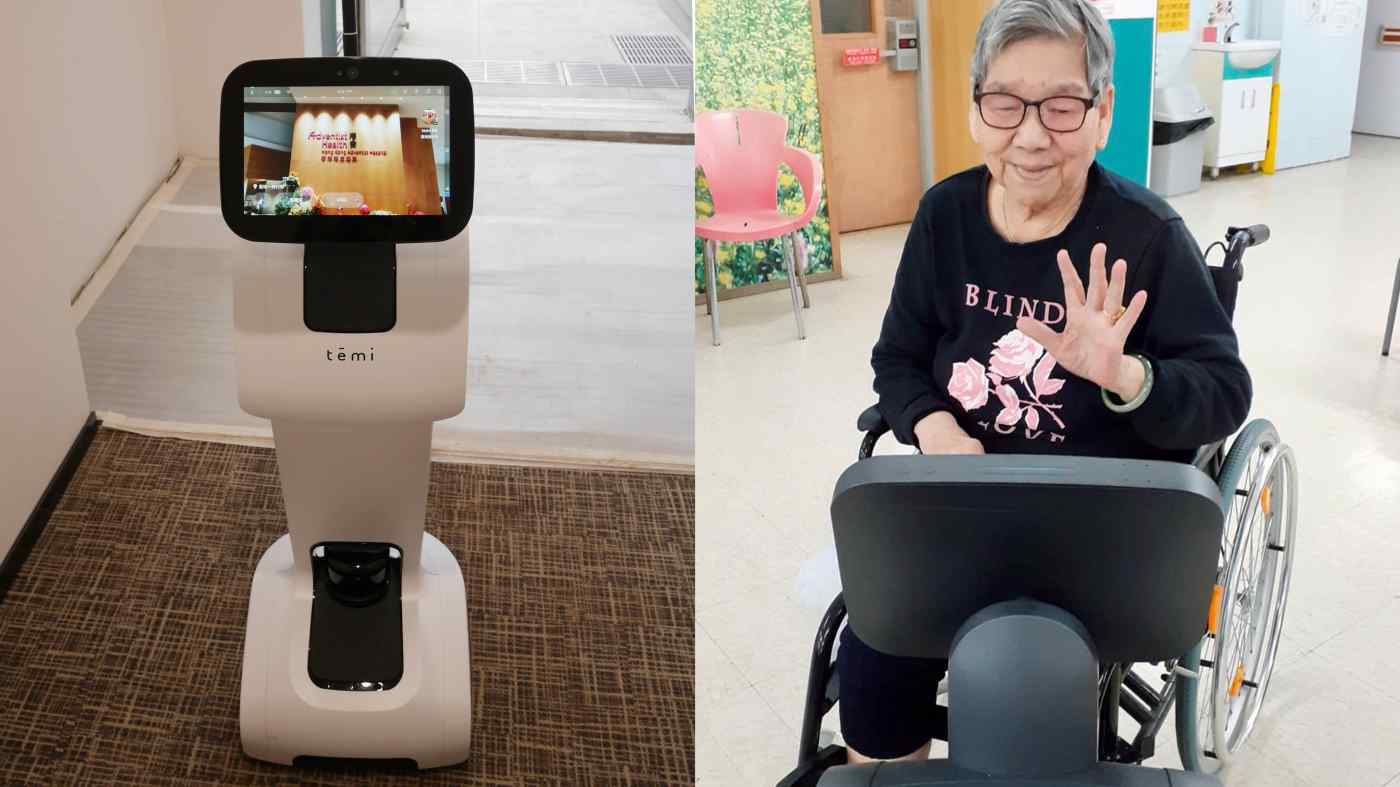 HONG KONG -- Making new friends, or even catching up with old ones, can be hard enough when you're 93 years old and living in fear of the coronavirus.

Which is why Chui Dip-sai has been so grateful for Temi, an Israeli-developed service robot that has become the Hong Kong nursing home resident's constant companion after city-wide lockdowns have kept family and friends away.

"It is very easy to use," Chui told the Nikkei Asian Review in a video interview facilitated by the Cantonese-speaking robot on wheels. "I always talk with Temi, and I don't feel bored anymore."

With a tablet-like screen for a face, and voice control powered by Google, Temi can keep Chui entertained for hours with music, videos and other diversions.

Across China, more people and businesses are turning to service robots to help steer a course through the pandemic, which has so far infected more than 81,000 people across the country and caused around 3,300 deaths.

Looking ahead, when labor shortages and rules enforcing social distancing are eventually eased, analysts say people's newfound affection for their servants on wheels could give robot developers a boost.

Long the world's largest market for industrial robots -- in 2018 China added more robots to factory floors than Europe and the U.S. combined -- the deployment of service robots in the country is still few and far in between.

According to the Beijing-based Chinese Institute of Electronics, the country's service robot market was worth around $2.2 billion last year, less than half that of the market for industrial robots. High price tags and lagging product design are cited as the main reasons for slow takeup rates.

But as fears of coronavirus transmission persist, many businesses seem to be giving robots a second look.

After a Shenzhen courier was diagnosed with coronavirus, Chinese food delivery company Meituan Dianping in March took advantage of relaxed rules on the use of autonomous vehicles used to deliver groceries to consumers. Domestic e-commerce platforms such as JD.com and Alibaba Group Holding have also beefed up their driverless logistic services.

Even in remote Xinjiang, in the country's far northwest, where the local workforce has shrunk due to the coronavirus outbreak, State Grid, a utility, has introduced robotic inspectors to work alongside power plant technicians.

"When we first started selling it in mid-2019, we only had one order every few days," said Roy Lim, president of Tung Hing Automation, the sole distributor of the Temi robot in Hong Kong and and an early investor in the Israeli startup.

"Since the virus outbreak in January, we can sell three to five robots every day," said Lim, adding that the company can't make enough robots to satisfy the spike in demand.

"These organizations need an urgent solution to mitigate human interaction during the crisis, so once they find out about us, they make orders without a second thought," said Lim. "Since the virus outbreak in January, we can sell three to five robots every day," said Roy Lim, president of Tung Hing Automation.

With many customers telling him they will never be able to go back to doing everything manually again, Lim is confident demand for service robots like Temi will outlive the pandemic, and he is already looking to expand into Europe and other parts of Asia.

Other service robot makers, such as Beijing-based Yunji Technology, backed by Tencent Holdings, have also observed a striking change in consumer attitudes.

"Some hoteliers in China gave a cold shoulder to service robots because they worried that robots cannot create a warm feeling, as humans can do," Yunji Technology vice president Yang Zi told the Nikkei Asian Review. "Now it turns out that the use of service robots can also be a guest-friendly approach," said Yang, citing the health benefits of reducing human interactions.

Yunji Technology's clients include Huazhu Hotels Group, a Nasdaq-listed Chinese hotel chain that recently ordered all its 5,700 hotels to embrace "non-contact" services made possible by robots and other technologies driven by artificial intelligence.

Working around the clock since the coronavirus outbreak, Xia Zifan, vice president of Hanyue Hotel Group, also sees higher demand for service robots in the hospitality sector. "Many hotels in China used to consider service robots nothing but a showoff," said Xia. "But as the outbreak has forced them to try out the technology, I believe they will be amazed by how convenient it is to use the robots."

Deploying service robots at more than 200 hotels since 2016, Xia said the mechanical helpers do everything from entertain and check in guests to room-service deliveries. "Robots do not demand insurance or pensions," said Xia. A robot "can work until it breaks, and you do not have to worry about whether it wants a day off or is in a bad mood."

Equipped with facial recognization and body-temperature screening functions, Xia said robots are now guarding hotel lobbies to report anyone not wearing a mask or who may have a fever.

"This crisis has helped us overcome the discomfort of interacting with robots," said Mark Greeven, a professor specializing in Chinese technology at IMD Business School in Switzerland.

The somewhat odd appearance of service robots, together with their high price tag and complex operating systems, put off many potential buyers in the past, said Greeven. But with the sudden need to reduce human contact, "nobody cares if the robot looks nice or if it is easy to use. Now it is almost normal to talk to or use a service robot in all settings," he said.

Still, not everyone is convinced.

Beijing real estate professional Angela Yu, 30, told the Nikkei Asian Review that after the lockdown prevented her domestic helper from coming to work, she considered employing a robot. But after a quick search online, Yu gave up when she realized that even the most advanced-model robot would require he to tidy the floor before letting the machine loose -- and then she would have to clean the robot itself.

"If I were willing to make that effort, I would have cleaned the condo myself," said Yu. "What I really need is a robot that is smart enough to fold my clothes, change my bed sheets and organize my belongings. That's definitely the future, but for the time being, cleaning robots are not of great help."

Nor are service robots exactly cost-competitive with their human counterparts. "For what I would spend on a cleaning robot, I could hire a cleaning lady for two years," said Yu.

And while empty streets made it easy for self-driving robots to make crosstown deliveries in shuttered cities like Wuhan, the epicenter of the coronavirus outbreak, the widespread introduction of autonomous vehicles will have to wait until the regulatory environment catches up. Self-driving vehicles like this were able to take advantage of Wuhan's empty streets at the peak of the coronavirus lockdown. (Photo courtesy of Idriveplus)

"The key barriers facing us before the outbreak have not been lifted by the outbreak," said Zhang Dezhao, CEO of Beijing-based autonomous vehicle maker Idriveplus.

His startup has received about 100 product inquiries a week since the onset of the crisis. That is a big improvement from before, when he considered 10 calls a busy week. But Zhang said it is still too early to say whether China's service robot sector has reached a turning point.

But for Hong Kong's Chui Dip-sai at least, life in her nursing home will never be the same.

"I'm just so happy to know that the robot will always be at my service, so I won't trouble anyone no matter how many requests I have," she said.