With miniaturization at a wall, upstarts gain edge in race for faster chips 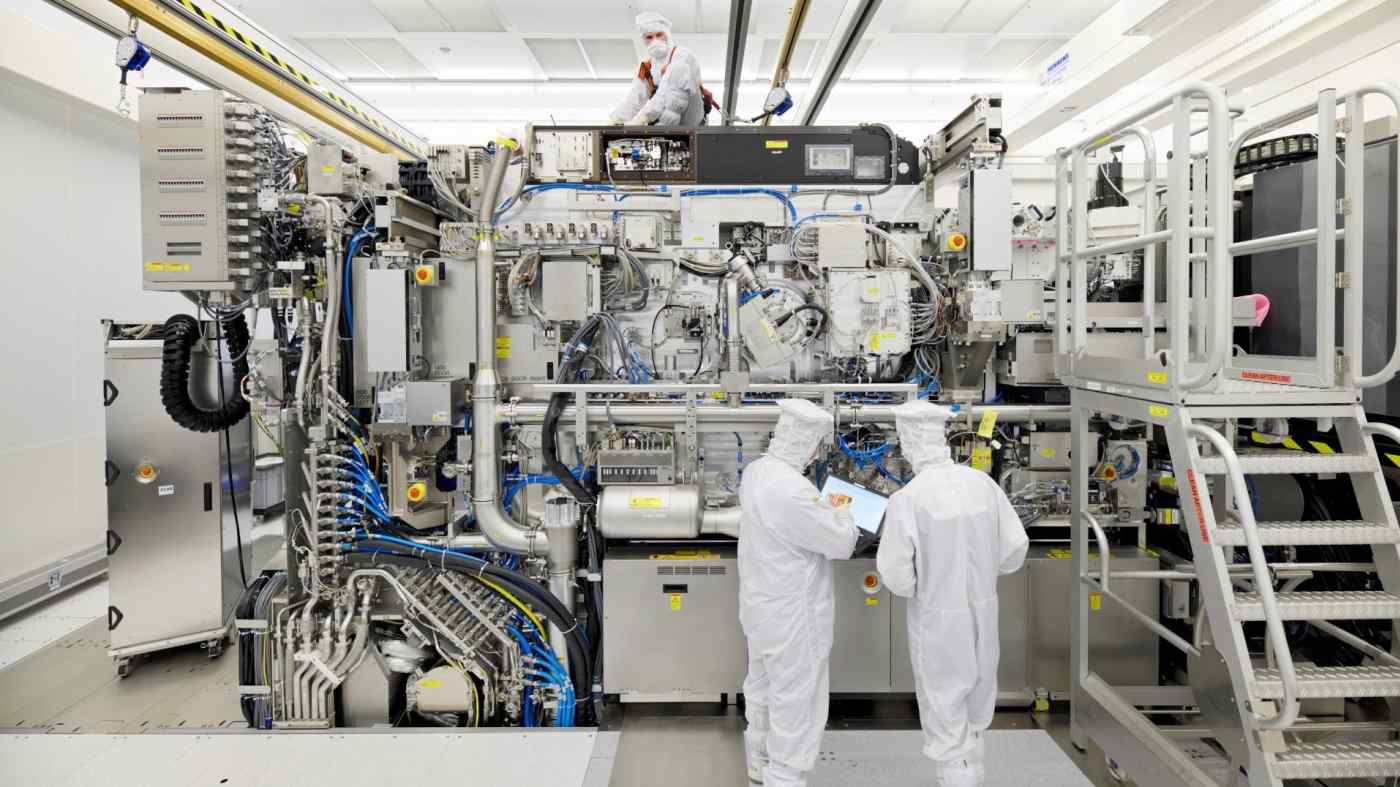 It looked like a bold decision and perhaps an ill-conceived move considering the U.S.-China technology rivalry was growing nastier. The U.S. continues to throw one punch after another at Chinese semiconductor makers Huawei Technology and Semiconductor Manufacturing International Corp., known as SMIC, making the idea of launching a new chipmaking business in China appear daunting.

"We are living in a world where latecomers have a better chance to catch up with incumbent leaders," he told Nikkei Asia, "because semiconductor technology is progressing more slowly today as the smallness of transistors is approaching limits in terms of physics and optics."

He is not talking about the near-term conditions for building a new memory-chip factory, which are far from ideal. It is uncertain how long Chinese companies will be allowed to import U.S. chipmaking equipment and chip-designing software, though as of Oct. 19 Unigroup has not been named as a restriction target by any U.S. government agency.

Rather, Sakamoto is talking about the longer-term prospects for China to develop its own silicon wafer fabrication skills and technological capabilities for domestically supplying chipmaking materials, equipment and software.

History tells us that a technology paradigm shift can create opportunities for emerging players, and Sakamoto is seeing this unfold in the semiconductor sector today.

Moore's Law remains on the books. It says that the number of transistors in an integrated-circuit chip doubles every 18 to 24 months. It was foretold by Intel co-founder Gordon Moore in the 1960s. Until the mid-2000s, the industry kept pace with the law by shrinking the size of transistors and circuits built on a surface of a silicon wafer die. But miniaturization hit a wall about 15 years ago. The size of transistors had shrunk to about 30 nanometers (30 billionths of a meter), measured by the width of a central electrode called a "gate." Therefore the speed of miniaturization slowed.

Chipmakers have nonetheless kept reducing the numbers labeling their latest generations of chips, going from 32nm to 22nm, to 14nm and to 10nm. But these numbers stopped representing actual transistor-gate sizes after the mid-2000s, becoming something like brand labels.

For example, the actual gate length of a transistor in a "7nm" logic chip made last year by Taiwan Semiconductor Manufacturing Corp., known as TSMC, was somewhere around 18 nm, according to University of Tokyo professor Toshiro Hiramoto. It is a stark deviation from the "32 nm" chips, whose gate length was actually 32 nm or smaller.

Because of the increased difficulty and rising cost of miniaturization, chipmakers are turning to so-called three-dimension technologies that make use of the space above the conventional wafer surface to load more transistors onto a chip.

For example, the most advanced NAND flash memory chip, commonly used for data and image storage in smartphones and personal computers, is structured in as many as 96 to 128 layers of integrated circuits stacked on top of the bottom wafer die.

While the layers increase and the whole chip thickens, transistor miniaturization has reversed itself in the world of flash memory.

Today, the typical transistor size of a flash chip is somewhere in the 22-32 nm range, larger than the 14-nm transistors used in flash memories a few years ago, according to industry experts.

Such a shift of importance from miniaturization to 3D technologies is likely to affect the industry's stance about the most difficult part of the chipmaking process, photolithography.

Photolithography is a process in which a circuit plan is imprinted on the photosensitized surface of a silicon wafer by beaming light toward the wafer through a glass plate called a photo mask on which the circuit plan images are drawn. This is like the traditional photo development process, where an image captured on transparent film is imprinted on paper by projecting light through the negative film toward the photosensitized paper.

EUV lithography technology is so difficult and costly to develop that all but one lithography machine company, ASML of the Netherlands, have abandoned it.

ASML, bequeathed a monopoly, is believed to be selling one EUV lithography machine at a price range of $120 million to $170 million. When a chipmaker makes a deal with ASML, it buys a machine that is applicable only to tiny parts of the entire chip fabrication process and which brings about only modest miniaturization effects, industry experts say.

EUV machines today are used only for logic chips -- like PC microprocessors, system-on-chips in a smartphone and graphics processors for games and artificial-intelligence data crunching. Because of the complexity of circuit composition, logic chips have not been able to fully deploy 3D layer technologies.

When they do, the cost and difficulty of deploying EUV lithography may become less justifiable.

Flash-memory makers have actually skipped EUV. And "DRAM memories are unlikely to require EUV as far as I can see," predicts Sakamoto, who has run DRAM businesses at various companies including Texas Instruments, United Microelectronics (UMC) of Taiwan and Elpida Memory of Japan, which today is Micron Technology's Japanese plant.

If a chipmaking plant starts using EUV lithography, it requires many other processes also to be optimized for EUV lithography, meaning massive capital investments for various kinds of advanced equipment. The more advanced the equipment, the fewer suppliers there are, making U.S. bans more effective.

But if one can skip EUV lithography, the available choices for chipmaking equipment increases.

Some Chinese companies, including Huawei Technology itself, have been working hard to develop their own lithography machines. There are reports of successes in making prototypes of a lithography machine using deep-ultraviolet argon-fluoride excimer-laser immersion technology, the most advanced among non-EUV lithography technologies.

In addition, Yangtze Memory, an affiliate of Unigroup, announced in June that it had succeeded in developing a manufacturing capability for 128-layered 3D flash memory chips and will start commercial production by the end of the year.

The U.S. seems to have focused on EUV in efforts to block China from obtaining advanced semiconductor technologies. It has been reported that the U.S. successfully persuaded the Dutch government to block ASML from selling EUV machines to SMIC. But, as Yangtze shows, China is accumulating know-how in 3D chipmaking skills, which will eventually be applicable to advanced logic chips and will help the country avoid dependency on EUV-based miniaturization.

Of course, there is a harsh reality that most of the non-lithography equipment items handling dozens of chipmaking-process stages are made almost exclusively by U.S. and Japanese companies. The thin-layer deposition process, critical in pursuing multilayer 3D chipmaking, is dominated by Applied Materials of the U.S. And surface inspectors of KLA-Tencor of the U.S. are indispensable in completing each such layer.

No matter whether 3D tech is involved, if access to U.S. equipment is blocked, it will disable any chip manufacturer in building or expanding its manufacturing capacity.

However, in the longer run, experts believe China is capable of enhancing its capabilities in all related sectors -- materials, optics, chemical, wafer-fabrication process control, surface inspecting, function testing and so on.

Toshiaki Ikoma, former president of Texas Instruments' Japanese subsidiary and former chief technology officer at Canon, was SMIC's chief technology officer in the mid-2000s. Based on his experience there, he believes China has a sufficient number of capable scientists and engineers to develop its own chipmaking equipment and chip-design software.

"Their national strategy to send many students to U.S. schools and companies and then repatriate them like sea turtles, which has been going on for decades, is bearing fruit," he told Nikkei.

Hideki Wakabayashi, a Tokyo University of Science professor, says developing the whole supply chain of chipmaking equipment and materials cannot be done quickly. But "there is a possibility for China to become a dominant country in the field in 10-20 years because of its abundance of talent in all science and engineering fields," he said.

And technology trends are a plus for latecomers like China. "New technologies such as new materials, 3D, advanced packaging, AI-assisted chip design and cloud-based manufacturing collaboration will all create new opportunities for emerging players," said Samuel Wang, research vice president at Gartner.

James Lewis, senior vice president at the Center for Strategic and International Studies in Washington reminds that a U.S. ban on satellite components to China led non-U.S. companies to become alternative suppliers. "Overly broad restrictions will harm the U.S. more than China," he warned on his blog in May, commenting on U.S. efforts to block China's access to semiconductor technologies.

Sakamoto said he had been impressed when he was chatting with a Chinese business leader earlier this year. "He told me that Chinese tech leaders are now grateful to Mr. Trump for helping them become resolutely determined to develop technologies on our own," Sakamoto said.

It may be true that the U.S. tech squeeze has crushed President Xi Jinping's public dream of China supplying 70% of its own semiconductor demand by 2025. In 2019, China fed 16% of its own demand, according to IC Insights. But the U.S. policy may be raising the longer-term probability of China realizing Xi's dream.