TAIPEI -- Taiwan has taken on China's biggest e-commerce group in its latest action against companies accused of circumventing tighter regulations on mainland investment in this market.

Online mall Taobao's Taiwanese arm was ordered Monday to reregister as a Chinese-backed business or leave within six months after authorities said that Alibaba Group Holding hid its participation by routing its investment through the U.K. and Singapore.

The regulatory action is part of growing pressure on mainland companies operating in Taiwan under President Tsai Ing-wen, who has vowed to ease the island's economic dependence on the mainland.

Investment Commission spokesperson Su Chi-yen told Nikkei on Tuesday than an investigation had determined that the company operating Taobao in Taiwan -- Claddagh Venture Investment -- is "in effect controlled by Alibaba."

Taiwanese law treats any company with more than 30% Chinese ownership as a mainland Chinese enterprise subject to stricter rules. 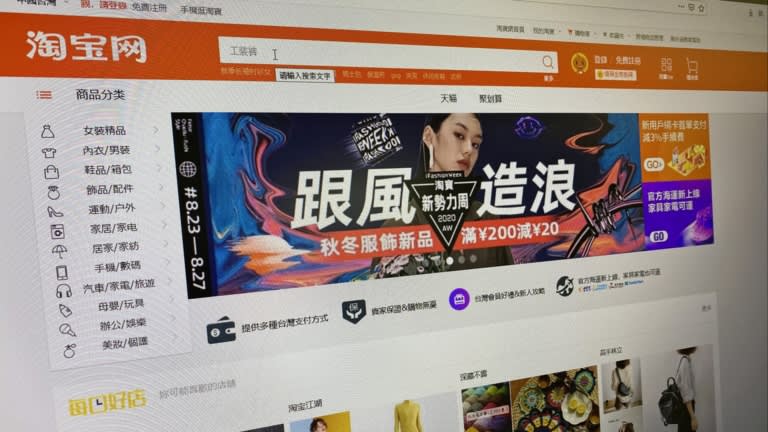 Taiwanese authorities allege the U.K.-based firm that operates Taobao Taiwan is in effect controlled by Alibaba. (Photo by Yu Nakamura)

In July 2019, Claddagh established a Taiwanese subsidiary with just 100,000 New Taiwan dollars ($3,400 at current rates) in capital. Shortly thereafter, the firm boosted the unit's funding to NT$20.1 million all at once and began operating a Taobao platform here. Authorities, suspecting that Alibaba might be involved, began looking into the unit.

China's biggest e-commerce group tried to improve its odds of avoiding legal difficulties by investing in Claddagh through a Singapore-based subsidiary and keeping its stake below the 30% threshold, according to Taiwanese authorities.

But Taiwanese authorities said Alibaba wholly owned one of Claddagh's three shareholders, and the arrangement blocked the firm from convening a shareholders meeting without the Chinese company's participation -- an indication of Alibaba's effective control.

Taobao has enjoyed a boom in Taiwan, with monthly growth of roughly 20%. If the local unit is reclassified as Chinese-backed, it will face legal restrictions that make it difficult to continue operating.

Baidu's iQiyi video streaming service is in a similar position. When legal restrictions blocked it from entering Taiwan in 2016, iQiyi tried to access the market another way. But Taiwan is putting in place new rules that will block local companies from distributing its content, in effect shutting down the platform on Sept. 3.