A cappuccino served at a Beijing cafe: China's cafe market is on pace to grow 15% annually in the five years through 2023.   © Reuters
NAOKI MATSUDA, Nikkei staff writerJune 25, 2021 07:18 JST | China
CopyCopied

SHANGHAI -- Tencent Holdings and ByteDance are among the Chinese tech companies betting that their products and coffee shops will go together as good as, well, coffee and cream.

Despite last year's Luckin Coffee accounting scandal still fresh in the minds of many, China's up-and coming coffee chains have become the favorite of many of the country's largest tech companies, which can smell opportunity brewing.

The coffeehouse market is expected to expand by double digits -- and a poster child of that growth is Manner Coffee, a chain backed by TikTok developer ByteDance known for roasting its own beans and the sleek minimalist designs of its shops.

"The coffee is delicious, and I love the simple design of the shop," said Chen, a Shanghai company worker who frequents a Manner Coffee outlet close to her home.

Starbucks used to be Chen's go-to spot, but Manner Coffee won out because "the prices are lower," she said.

Manner Coffee, established in 2015, offers its main selections at between 10 yuan and 20 yuan ($1.55 and $3.10), a price point that compares favorably with Starbucks' offerings, which mostly range from 20 yuan to 40 yuan.

Manner Coffee's rise grabbed the attention of China's leading food delivery app, Meituan, which invested in the company in May. ByteDance injected funds this month. 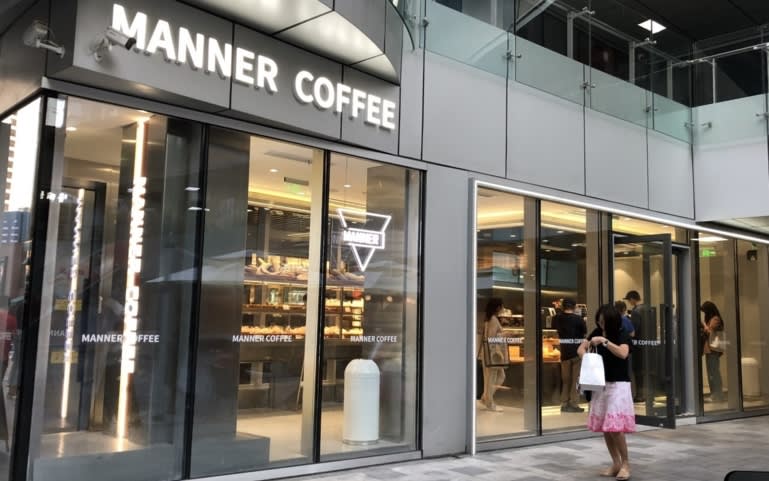 Tim Hortons, the Canadian coffee and doughnut chain, has thrived in China as well. Since opening its first shop there in 2019, it has expanded to about 200 locations. Tencent twice poured funds into Tim Horton's Chinese unit, first in May 2020 and again in February.

The upstart coffee chains will use their newfound capital to accelerate their growth strategy. Tim Hortons plans to open 200 additional outlets this year alone, according to Chinese media reports. Under the team-up with Tencent, Tim Hortons looks to field a 1,500-shop empire within the next few years.

Although Manner Coffee has just over 130 shops, Beijing analytics company ITJuzi values the company at $2.5 billion.

Chinese tech groups are chasing after coffee chains because of their massive growth potential. The cafe market will top 120 billion yuan ($18.5 billion) in 2023, according to the Qianzhan Industry Research Institute, up from roughly 90 billion yuan in 2020. This would equate to the market expanding by more than 15% a year on average since 2018.

Tech giants anticipate synergy with their digital services. There is a growing contingent of Chinese youth dubbed "lay-flatters," or tangping, who are unmotivated to earn money and spend. This group, however, will not buy something simply because it is cheap.

Considering coffee chains are frequented by young people, tech groups see an opportunity to use the locations to promote their services, such as video games and streaming videos. That upsurge in business-to-consumer interactions would drive brand penetration. 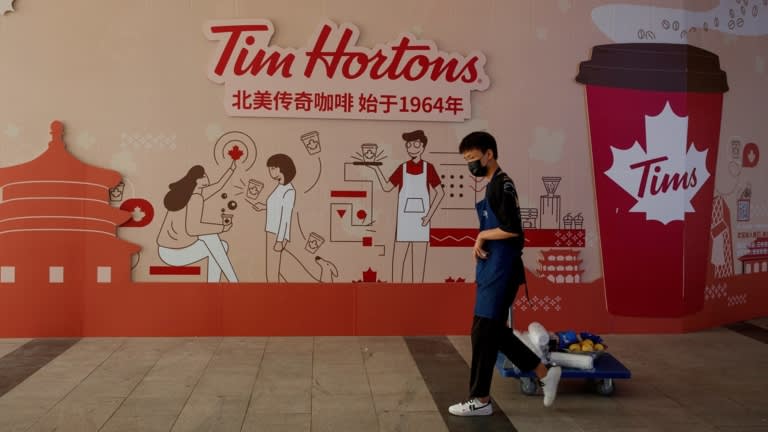 Tim Hortons plans to field a 1,500 shops in China within the next few years.   © Reuters

Tencent, a big-name game developer, has opened e-sport coffee shops together with Tim Hortons. ByteDance is expected to collaborate with Manner Coffee by tapping influencers on Douyin, the Chinese version of TikTok, to promote products.

Chinese e-commerce leader Alibaba Group Holding entered into a tie-up with Starbucks in 2018. Under the deal, food delivery app and Alibaba unit Ele.me delivers Starbucks coffee to customers. The Alibaba and Starbucks sides have successfully worked together on e-commerce promotions.

China's coffee culture took root after Starbucks first entered the market in 1999. Others jumped in, such as local player Pacific Coffee and Costa Coffee, the British chain under Coca-Cola's umbrella.

But in recent years, Starbucks' store count has sputtered amid lackluster business. Luckin Coffee managed to surpass Starbucks in terms of outlets before an accounting scandal forced it to close most of its shops.

Luckin is now restructuring itself after receiving rescue funding from private equity firms. In January, it was revealed that a group of executives wrote a letter asking the company to dismiss the CEO.

Despite Luckin's questionable footing, it is still the second-largest coffee chain in China behind Starbucks. With tech giants entering the picture, the coffee market will undergo further sea changes.