TOKYO -- Chinese internet group Tencent Holdings is moving beyond a local strategy to form a global "empire" by leveraging its game business.

The company has grown by forming partnerships with local companies and making repeated investments in target markets, with highly convenient apps -- such as messaging portal WeChat, which has 1.2 billion users -- providing a strong economic base on which to build.

Tencent Holdings now ranks among the world's top 10 companies in terms of market capitalization, but its increased presence on the global stage is leading to political frictions with the U.S.

At a briefing in December, Zhao Jiannan, managing director of Northeast Asia at Tencent Cloud International, the company's cloud computing arm, underlined the ambitions it has for its gaming business in Japan, for example, home to some of the games industry heavyweights, Sony and Nintendo.

"Another aspect of Tencent is that it's a game company," he said. "Our wish is to contribute to Japan's game industry through our cloud business." Tencent operates a data center in Japan.

One way that Tencent is going the extra mile for its users can be seen in the smash hit game in the Chinese market, Honor of Kings, which offers a video review function to examine how a user tackled the game once play is over. The videos are automatically created using artificial intelligence to highlight certain scenes. Tencent aims to further develop customers, such as game companies, by leveraging such popular functions.

What propelled Tencent forward was its social media and game business. According to U.S. market intelligence company Sensor Tower, the Playerunknown's Battlegrounds Mobile and Honor of Kings games, both distributed by Tencent, ranked top and second in the mobile game revenue ranking in 2020, with revenue levels reaching more than double those of rivals ranking third or lower, including Pokemon Go by Niantic of the U.S. 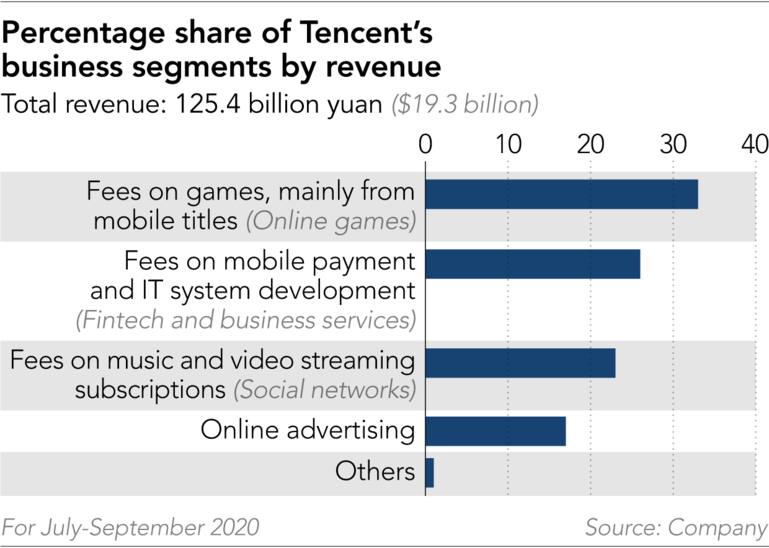 Unlike older industry players Nintendo and Sony, which both make games consoles, Tencent's main arena is on mobile. With distribution as its key weapon, it has swept through the game industry with a strategy of gradually expanding its economic base by striking tie-up deals and making investments. It is now poised to become as much of a worldwide presence as Netflix, the U.S. video streaming company which has grown fast by lining up strong content offerings from a solid capital base.

Making acquisition moves in the game industry, Tencent targeted Riot Games, known for its League of Legends title, and Supercell, a company formerly owned by Japanese tech investor SoftBank Group and known for the Clash of Clans game.

It now has interests in major mobile games after investing in Bluehole, a South Korean company that developed PUBG, and Epic Games, the Fortnite developer which has taken on Apple over distribution fees on its App Store. Tencent also has close ties with Japanese game companies, including a stake in Marvelous, the developer of Harvest Moon, and a tie-up deal with Nintendo.

More recently, Tencent has been in the process of merging two live game streaming companies it has stakes in, so as to gain control of them. As the new coronavirus pandemic has stimulated demand for game play from people staying at home, Tencent saw its mobile online game revenue increase by 45% in the period from July to September 2020. "Tencent has focused from the beginning on communication to link people together," said Toshihiko Okano, an expert on Chinese tech companies at Japan's NTT Data Institute of Management Consulting. "It has been successful in creating an ecosystem using infrastructure and technology." In Asia, especially, it has "successfully concealed its 'Chinese' color by working with local companies."

Tencent, whose business is centered on WeChat, operates the WeChat Pay news, music streaming and payment service, as well as its cloud service.

It has launched mini apps that operate on WeChat apps and reinforces their functions. For example, these can give users the ability to order items by scanning QR codes on their phones in shops.

Via investments and partnerships, it has also expanded operations into wide-ranging industrial areas, including the development of basic in-vehicle software, artificial intelligence, systems development linked to smart cities, and ride-hailing and map services.

In Japan specifically, Tencent is promoting a strategy of using games to expand its economic base. It has teamed up with local conglomerate Mitsui & Co. and used its cloud service to support the development of mini apps. Tencent aims to sell this service to Japanese companies wishing to develop in the Chinese market. It is in talks with Mitsui about establishing a joint company.

Tencent's strategy of promoting "super apps," which offer wide-ranging services, including payment, social media, food and ride-hailing, on a single app, is growing, particularly in Asia.

However, its economic expansion is bumping up against a wall. Outgoing U.S. President Donald Trump has signed an executive order banning transactions in the U.S. via Chinese apps, including Alibaba's Alipay and the payment function of WeChat.

In the summer of 2020, Trump also signed an executive order banning the hugely popular video-sharing app TikTok, owned by China's ByteDance, and WeChat. It remains unclear whether either order will take effect with the upcoming transition to the administration of President-elect Joe Biden. Whether or not they do, conflicts between Chinese companies and the U.S. authorities are expected to remain.

While Tencent's social media-related services are facing security issues in the U.S. over data use, its game service has not so far come up against regulatory restrictions there. However, in India, there have been moves to potentially ban the use of its apps. The company also faces the difficulty of maintaining a favorable relationship with the Chinese government, after Alibaba's relationship with Beijing has deteriorated since late last year.