Beijing plays down its ongoing semiconductor ambitions amid U.S. push back SHANGHAI/TAIPEI -- China's chip equipment makers are seeing an uptick in domestic demand thanks to the trade war, giving them an opportunity to finally gain ground on global rivals like Applied Materials and Tokyo Electron.

Beijing-backed startup Skyverse says it will start selling its chip testing technology to major Chinese chipmakers this year, a development that Marketing Manager Leo He attributes at least partly to the trade tensions with the U.S.

"We found that more local chip manufacturers are willing to test and try our products especially after the trade tensions escalated last year," He told the Nikkei Asian Review. "They are really keen to use domestic offerings once we can provide them. ... That's something we did not feel years ago."

While industry players acknowledge that many Chinese companies still have a long way to go in terms of technical capability, the nascent shift toward domestic equipment underscores the importance that the government is placing on the sector as a whole.

The shift also comes as China is predicted to buck the global downturn in the chip market. Industry revenue in China, including foreign players operating in the country, is predicted to grow by more than 16%, compared with a possible global decline of 3%.

Skyverse, founded in 2014 by scientist Chen Lu, is backed by SDIC Venture Capital, the Beijing-sponsored flagship financing program controlled by State Development and Investment Corp. The company aims to take on KLA-Tencor of the U.S., the world's biggest semiconductor testing tool provider.

It plans to begin mass producing its chip testing tool this year. Yangtze Memory Technologies, a state-backed memory chipmaker that aims to challenge Samsung and Micron, will adopt the equipment, according to He, as will two other top local companies, Semiconductor Manufacturing International Co. and Huali Microelectronics. "It will be a landmark year for us in 2019," He said. 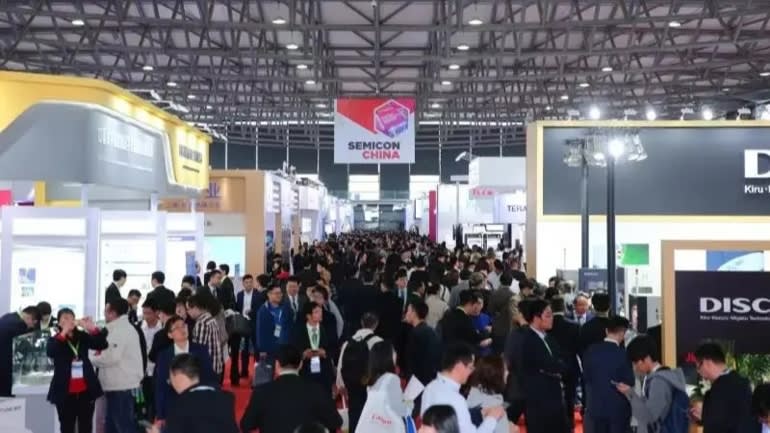 The optimistic outlook for companies like Skyverse highlights not only China's ambitions, but also how far the country still has to go in terms of reducing its reliance on foreign suppliers.

China currently has no notable players that can match the technology offerings of chip equipment titans like Applied Materials, Lam Research, KLA-Tencor, Tokyo Electron and ASML. None of the world's chip manufacturers -- including market leaders Samsung, Intel and Taiwan Semiconductor Manufacturing Co. -- would be able to produce integrated circuits without these vendors' wide range of advanced wafer-processing tools.

Because chips are used in almost every electronic devices from smartphones to servers to connected cars and are closely connected to national security, the equipment required to produce them are also viewed as crucial weapons in the tech battle between the U.S. and China.

Still, Mattson is keen to catch up. The company was acquired by a Chinese state fund in 2016, and it nearly doubled its research and development investment in 2018 to around $40 million.

Mattson, too, sees the trade war as a positive in terms of winning local customers, according to Marketing Director Andy Zhang. "We think it's natural for local chip producers to use more domestic equipment, and we do find it's easier to approach them because of the uncertainties brought by the trade tension, and the government would definitely support this incentive, too," he said. He noted, however, that quality is still the deciding factor in success. "At the end of the day, it's only the quality of the equipment that really determines whether you can get the business deal."

The trade war and a slowing smartphone market have hampered global chip demand, with the market predicted to decline 3% this year, according to the latest forecast by World Semiconductor Trade Statistics, one of the industry's best-known data providers.

China remains a bright spot, however, with the domestic chip industry predicted to grow 16.2% in terms of revenue, according to data from Taipei-based research company TrendForce.

Expectations for the Chinese market were reflected at the annual SEMICON China in Shanghai in late March, which attracted a record 100,000 industry executives and professionals.

China is the world's biggest consumer of semiconductors, as well as the second-largest chip equipment market worldwide, behind only South Korea.

Nevertheless, the country still imported $312 billion worth of chips in 2018 -- its top import for the year. 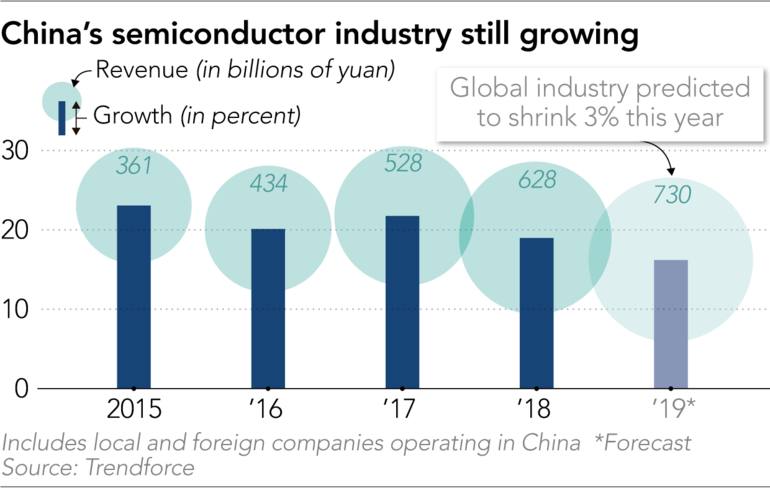 "It's still very challenging to our country as we work to become more self-reliant," Ding added.

Ding said China needs to acknowledge the "big technology gap" between its homegrown chip players and their leading foreign peers in the U.S., Europe, South Korea and Japan. His fund, he added, is ready to welcome foreign players that want to participate in China's "buoyant and developing" semiconductor industry.

Many foreign and domestic industry executives said Beijing has taken a slightly less aggressive tone in its public responses to the U.S. crackdown on China's tech ambition.  Nevertheless, they say, the central and local governments have never scaled back their support for local chip projects.

Jackson Hwang, co-founder and chief strategy officer of Foxsemicon Integrated Technology, a Foxconn unit making chip equipment parts for foreign customers like Applied Materials, said: "The trade tension between the world's two big powers has pushed China to be more determined than ever to build a self-reliant industry."

"The supports from Chinese governments have never been so strong in making utilities [and] land ready and to attract more talent globally after the prolonged trade tension ... That's how I feel currently," Hwang said. Foxsemicon is currently building a new campus and logistics center in the Chinese city of Nanjing slated to begin production by the second half of next year.

Gary Dickerson, chief executive of Applied Materials, the world's biggest chip equipment provider, took the opportunity to make his first clear public statement related on the trade war, saying, "The strained relationship between China and the U.S. can put decades of economic growth at risk."

He warned it would be "a lose-lose proposition" if the world's two biggest economic power were unable to get along.

"Very few business executives could resist the vast opportunities in the world's largest semiconductor market," said Foxsemicon's Hwang. "I think most of them would try to strike a balance between the world's two biggest economies by investing both in the U.S. and China."