JERUSALEM -- As artificial intelligence, self-driving cars and big data analysis emerge as key technologies driving growth in the near future, Chinese companies are increasingly looking to Israel for a competitive edge.

U.S. companies such as Google and Microsoft have long worked to identify and acquire hidden gems in Israel's tech sector, many of which come out of the military. The latest such move was Intel's $15.3 billion purchase of Mobileye, an Israeli leader in computer vision for autonomous driving.

Now Chinese companies such as Alibaba and Fosun are also looking for new seeds of innovation in Israel. At a recent cabinet meeting in Jerusalem, Israeli Foreign Ministry officials said about one-third of investments in Israel's high-tech industry are from China and Hong Kong. This Chinese investment is growing by 50% a year, according to the IVC Research Center in Tel Aviv.

When Israeli Prime Minister Benjamin Netanyahu visited China earlier in March, just weeks after high-profile visits to Singapore and Australia, he sat down with the heads of some of China's largest companies, including Wanda, Alibaba, Wahaha, Lenovo and Baidu.

"I just met with 11 heads of the largest corporations in China. A major portion of them are investing in Israel, and a major portion of them will invest in Israel," Netanyahu said after the meeting on March 20. "I told them that in today's world there are several concentrations of technology, not many, [such as] the U.S., Israel. Israel is open for business with China."

Tech from the desert

In February, Chinese automaker SAIC announced plans to open a research and development center in Israel for advanced automotive technology. China's latest five-year plan calls for technological breakthroughs in the auto sector, and the government is heavily subsidizing the development of environmentally friendly transportation and smart cars. Automakers are looking to Israel as a source for such high tech.

IVC expects total fundraising in financing rounds with Chinese participation to reach up to $500 million this year, up from almost nothing in 2011.

The interest into Israeli technology comes at a time when Israel is pursuing an ambitious "pivot" to emerging Asian markets. While Netanyahu was in China, Israeli President Reuven Rivlin was also on an official visit to Vietnam. For both leaders and their entourages, the primary goal was to discuss business opportunities, investment and trade.

China showed interest in Israeli expertise in agricultural technology, cybersecurity, water purification and desalination, in addition to high-tech. Trade between Israel and China, which stood at $50 million when the two countries established diplomatic relations 25 years ago, has reached more than $11 billion, according to the Israeli Foreign Ministry.

"Israel's brand name in China is synonymous with innovation," said Alexander Pevzner, the founding director of the Chinese Media Center at the College of Management Academic Studies. "China needs technology and innovation and Israel is willing to give it to them. Netanyahu steered clear of politically sensitive issues and focused on economic and technological cooperation."

Dorian Barak, managing director of Israeli investment management company Indigo Global said: "There are a number of reasons for Chinese investor interest in Israel, but one of the least mentioned is that Israel is the only global tech power that does not really compete with China -- unlike, for example, the U.S., Germany, South Korea or Japan. " Indigo is the venture partner of Shenzen based technology conglomerate Kuang Chi. 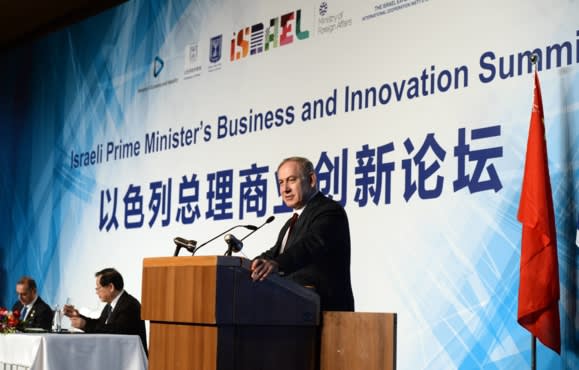 Kuang Chi has already invested $50 million from its first Global Community of Innovation Fund (GCI), launched in May of 2016, and in January it set up a second fund, GCI II, worth $250 million. That fund will be devoted to smart city and smart home technologies, the internet of things, artificial intelligence, virtual and artificial reality, robotics and medical devices. The fund's goal is to focus on Israeli other and international tech companies, Barak said.

Eli Barasch, head of Asia Practice and the China Desk at Tel Aviv law firm GKH, explains developments over the past three to four years, saying, "Chinese investment [has] played an increasingly important role in Israel's tech sector. While at first their investments focused primarily on later-stage companies with proven technologies and revenues, during 2015 and 2016 we saw increased Chinese interest in earlier-stage startups and, as a result, China [has] played an ever more important role in the Israeli tech sector, exceeded only by the U.S. and Israeli venture capital."

Barasch said that with the advent of the administration of U.S. President Donald Trump and the uncertainty surrounding his intentions toward trade with China, "Israel could become an even more attractive alternative for Chinese investors."

Indigo's Dorion Barak agrees. "Chinese investors view Israel as having one of the most effective and efficient innovation engines in the world, and I've spent the better part of the last five years shuttling between Israel and China. It's become evident to me that China sees Israel as a partner with complementary capabilities," Barak said.

Speaking at Sunday morning's cabinet meeting, Netanyahu said: "Last week, four ministers and I made a diplomatic and economic visit to China, during which Israeli companies signed deals with Chinese companies. Approximately 25 Israeli companies signed around $2 billion worth of deals during the visit. The main areas are health, agriculture, water and, of course, investment of Chinese capital in Israeli funds."

He went on to say, "During the visit, China granted Israel a unique status that it has with no other country in the world as a principal partner in developing innovation. They took care to emphasize the importance that they ascribe to this link with Israel vis-a-vis technology and innovation."

Netanyahu told ministers that Chinese President Xi Jinping agreed to consider developing an investment policy specific to Israel. "China recently decided to restrict, to completely halt, its external investments for its own reasons. In light of my request, the president of China said that he was prepared to consider an exception for Israel, meaning that Chinese investments in the high-tech and other sectors would continue."