TOKYO -- Chinese university student Wang Chen won the 12th World Students Go Oza Championship in Tokyo on Feb. 25-26. This was the first time in two years for a Chinese player to win the title, and the seventh time overall. In the annual amateur championship in the game of Go for university students, 16 participants from 12 countries and regions competed for the title. In the champion-deciding final game, which was played for the first time by Chinese and Taiwanese participants, Wang, from Shanghai University of Finance and Economics, overwhelmed Chung Chen-en, a student of Taiwan's National Central University, who took third place.

The second spot went to Tsubasa Yamikumo, a student at Osaka University, who qualified for the championship by winning the All Japan Students Go Oza championship in December. Risa Go, Japan's female participant from Ritsumeikan University, came in fourth for the second consecutive year.

The championship was jointly organized by The Nikkei, Pandanet and the All-Japan Students Go Association. The 16 participants, who had mainly qualified through the preliminaries held at Pandanet's Go game website, gathered at Ginza Internet Forum in Tokyo's Chuo Ward. As usual for the event, they each played four games and were ranked by the Swiss method, which factors in the number of wins and the total number of wins by the opponents. In the first round, China, South Korea, Taiwan and Japan, which each entered a male and a female student, played the other teams. While players from the four regions racked up wins as expected, due to their superior strength, China's female player, Zhou Shiying of Shanghai International Studies University, was beaten by France's Yanqi Zhang, a student at Paris 3 Sorbonne Nouvelle, and Taiwan's female player, Hu Shih-yun of National Chung Cheng University, suffered defeat by U.S. player Maojie Xia, from the University of Montana.

Zhang has won the French Go championship. Though she was defeated by strong male players in the second and subsequent games, she showed her great ability. Xia played for the second straight year. He defeated Chinese and Japanese players last year to come in eighth, and rose to sixth spot this year, proving himself as good as the strong players from the four regions.

In the first round, Russia's Viktor Ivanov, from ITMO University, played a matched game with South Korea's Kim Jaerin, from Myongji University. Though he lost, he proved along with Zhang that European players had raised their ability.

In the second round, winners in the first round played each other. The top two favorites, China's Wang and Japan's Yamikumo, played each other. "I was beaten hollow," said Yamikumo. Wang took second place at the World Amateur Go Championship four years ago at the age of 17, and has won many amateur tournaments in China. His ability "clearly exceeded that of the other players," said Seizo Nakazono, an official of the All-Japan Students Go Association.

Wang comfortably won the next game with Risa Go and the final game with Taiwan's Chung, which decided the champion. "I was able to show my ability in all the four games I played," Wang said calmly in an interview after clinching the title. "I would like to maintain the top amateur position," said the senior in economics.

Although both Yamikumo and Go failed to defeat Wang, their results -- second and fourth places -- were satisfactory for Japan compared with the results for the country in the previous years. 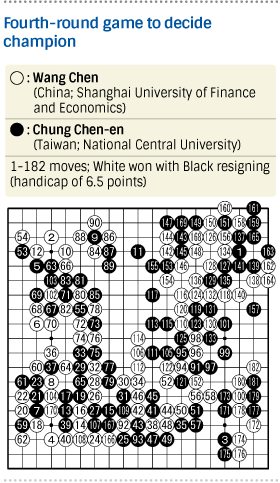 It is especially notable that Go retained fourth spot by beating South Korea's Kim in the final game. She earned the top result among the six female participants this year, including Thailand's Nissavara Punyarit, from Rangsit University. Kim, who had been expected to take a high place, lost two games, pushing up the Japanese players in the ranking.

It was the first time for a Taiwanese participant to play a game to decide the champion, much to the delight of people concerned. Taiwanese players had had difficulty beating Chinese and South Korean players. This time, Chung defeated Kim in the third round, finishing third. This probably reflected growing enthusiasm for Go in Taiwan.

The champion-deciding final game between Wang and Chung ended in an overwhelming victory for Wang, whose ability prevailed.

Chung placed emphasis on the upper side by playing black 9 and 11, so he "could have played with emphasis on the lower side" from around 167 when he turned to the lower left with black 13, said Rin Kaiho, a professional Go player and an honorary Tengen, or champion, having won five titles straight.

The progress from black 13 through white 24 was a set sequence, but Chung's next move, black 25, to block on the lower side was thin. Wang began with white 26, hane, and moved on to 34, and the group of black stones on the left and the lower side was divided into unreliable groups. "Black challenged White in a place where White had an advantage, and Black could not succeed by any means," Rin said.

After playing white 36 effectively on the left side, Wang played white 38 to take advantage of the thin area on the lower side and played through white 52, quickly forming a thick group. 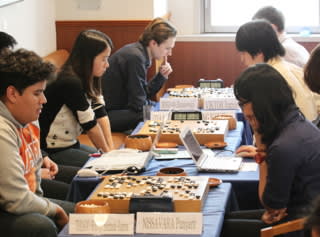 Furthermore, black 59, a cut at the lower left, was a bad move. In response, Wang played white 60, forcing Chung to play black 61, and Wang played white 64 to capture a black stone, creating a strong group of white stones on the left side. Chung played well with black 79 to capture three white stones, but Wang also secured a territory on the upper side, keeping the difference in territory size between the two from shrinking.

Chung was compelled to close in on a large group of white stones with black 91 in search of a breakthrough, but Wang was not disturbed at all. The players cut each other's connection with black 95 and white 96, and the game seemed likely to become a little confusing, but Wang, after confirming the safety of his group on the lower side with white 114, played from white 124, a turn, to white 126 to advance into the upper side. The black territory was clearly insufficient.

Chung could not win without capturing a group of white stones from the center to the upper right, but "these stones would not die," said Rin. Actually, the stones up to white 168 easily survived, and Wang took four stones with white 170 at the lower left, deciding the game. Chung played black 171 and subsequent stones only to look for an opportunity to resign.