Chinese automakers come into their own SHANGHAI State-owned Chinese automakers are working to develop more models under their own brands in an effort to prepare for intensifying competition in the world's largest auto market.

Chongqing Changan Automobile unveiled a new sport utility vehicle, the CS55, at the 17th Shanghai International Automobile Industry Exhibition, which kicked off on April 19. Equipped with a 1.5-liter engine, the vehicle combines the enhanced performance of core components supplied by Japanese companies with a bold color scheme from a European design team. It will debut as early as July.

President Zhu Huarong said the company has become the representative Chinese auto brand, and revealed plans to build a 4 billion yuan ($581 million) research and development center in Chongqing to strengthen that brand power. The site will focus on developing SUVs, sales of which jumped about 50% on the year in the January-March quarter.

Changan, which partners with such foreign players as Suzuki Motor, Mazda Motor and Ford Motor, sold 3.06 million vehicles groupwide in 2016. Original-brand vehicles accounted for 1.72 million of that. Zhu says the company plans to raise this to 2.3 million in 2020. 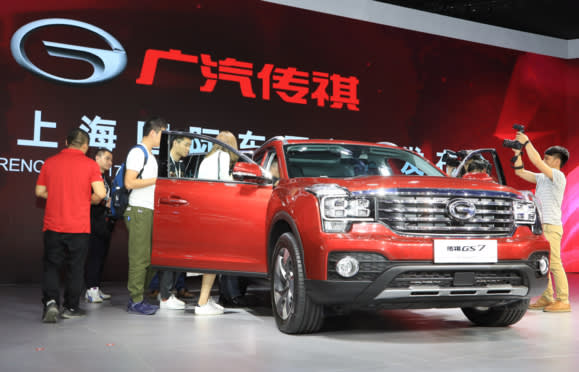 It will invest 10 billion yuan by 2020 in R&D and production, and aims to increase unit sales to 1 million by the same year, according to GAC General Manager Feng Xingya.

COMING INTO THEIR OWN Chinese brands are growing on the know-how learned via joint ventures, progress that has raised the quality of the country's passenger vehicles, noted an official at a U.S. automaker. In many cases, engineers and managers with experience in joint ventures are reassigned to original-brand operations.

Yasuhide Mizuno, who oversees Honda's Chinese operations, says that local manufacturers with high cost-efficiency and top-notch designs would become formidable contenders when they cultivate brand strength. A male office worker who recently bought a Changan SUV said he was happy with the large vehicle's reliability and affordable price.

SAIC Motor, whose Roewe line has gained in popularity, plans to grow the brand's dealership network to more than 500 by the end of the year, up from 400 now. The carmaker's monthly sales exceed 20,000 units, and it plans to boost its SUV and electric vehicle lineups. The Chinese government has required major foreign automakers to operate via joint ventures as a way to protect the domestic auto industry. Yet the U.S. under President Donald Trump is now pressing Beijing to lift such requirements.

The National Development and Reform Commission, which steers economic policies, is considering easing rules about joint ventures this summer, a top official at the body revealed.

New-auto sales in China grew 13.7% last year to 28.02 million units, the most in the world. This year, due to scaled-back tax breaks for compact vehicles, that growth is seen slowing to about 5%.

China is becoming a key battleground for domestic and foreign automakers alike. The most urgent task for Chinese players is to develop appealing products on their own.

GOING IT ALONE Chinese automakers that are neither state-backed nor involved in joint venture partnerships are also working hard to cultivate new markets and improve the appeal of their products.

Zhejiang Geely Holding Group plans to roll out the 01, the first mass-produced model under new brand Lynk & Co in the fall. The biggest feature of this model is the vehicle-sharing function. The owner can specify a time when he or she will not be using the car and make it available to others. People can find an available vehicle via a smartphone app and use an electronic key to unlock and drive it.

Since strangers will be allowed to use the car, it will come with a manufacturer's lifetime warranty rather than the usual three-to-five-year warranty. Younger people are the main target group. Pricing and other details will be set by the fall.

Great Wall Motor showed off the VV7, the first model of the luxury brand Wey. At some 180,000 yuan, the price is nearly double that of other models sold by the company. This is an effort to extricate itself from the intense price competition among Chinese automakers.

China's government will require production quotas for so-called new-energy vehicles starting next year, rising to 12% of an automaker's Chinese output in 2020, as part of efforts to alleviate the country's severe air pollution. China, which overtook the U.S. as the largest auto market in 2009, has become the key arena for global carmakers to cultivate their electric-vehicle operations.

Volkswagen holds the overall sales lead in the Chinese auto market. Herbert Diess, who heads Volkswagen's passenger car operations, said on April 19 that the German auto giant will strengthen its electric lineup in China. The company expects China to account for about 60% of its projected 1 million electric-vehicle sales in 2025. 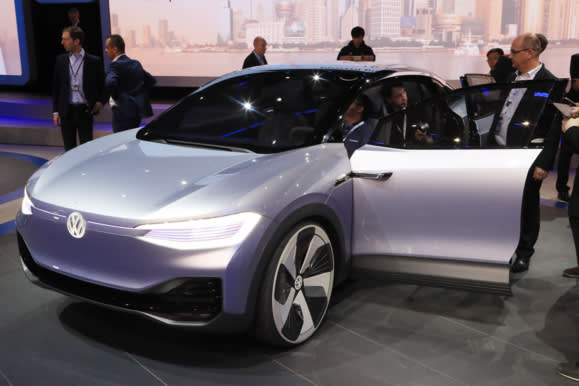 The automaker chose the Shanghai show for the world premiere of its new I.D. Crozz concept electric vehicle, which boasts a range of 500km per charge. Production is slated to begin in three years.

Japanese automakers have trailed Western rivals in the Chinese market but are banking on an electric push to help them catch up fast.

Honda Motor will accelerate its green strategy in China by moving up its planned introduction of plug-in hybrids by two years to 2018. The company will consider fuel-cell vehicles as well.

Toyota Motor plans to roll out electric vehicles in China within a few years.

Japanese automakers seized the global car market with fuel-efficient gasoline vehicles and hybrids. How well they promote green-energy strategies going forward will go a long way to determining their success in expanding their Chinese businesses.