Bloomberry Chairman Enrique Razon said Chinese arrivals at its Solaire casino in Manila ballooned by 140% in November and 80% in October compared with the same months last year.

"You can more or less attribute that directly to the improved [bilateral] relation," he told reporters on Thursday.

In October, Duterte made a state visit to China, the first outside Southeast Asia. His four-day visit, which yielded $24 billion in investment and credit pledges, marked a turning point for bilateral relations, which had deteriorated in recent years because of a territorial dispute in the South China Sea and the former Philippine government's hard-line attitude toward Beijing. 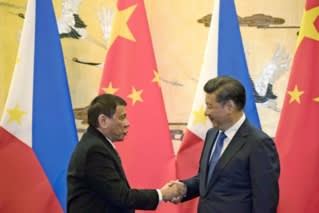 During the visit, China also lifted a travel ban imposed on the Philippines. Manila, however, has yet to release official tourist arrival statistics for October and November.

The increase in Chinese arrivals at Solaire could further improve Bloomberry's earnings, which has seen a turnaround this year. Its net profit from January to September stood at 1.59 billion pesos ($32.02 million), compared with 1.51 billion pesos in losses last year. Gross gaming revenues grew 14% to a record high of 28.03 billion pesos.