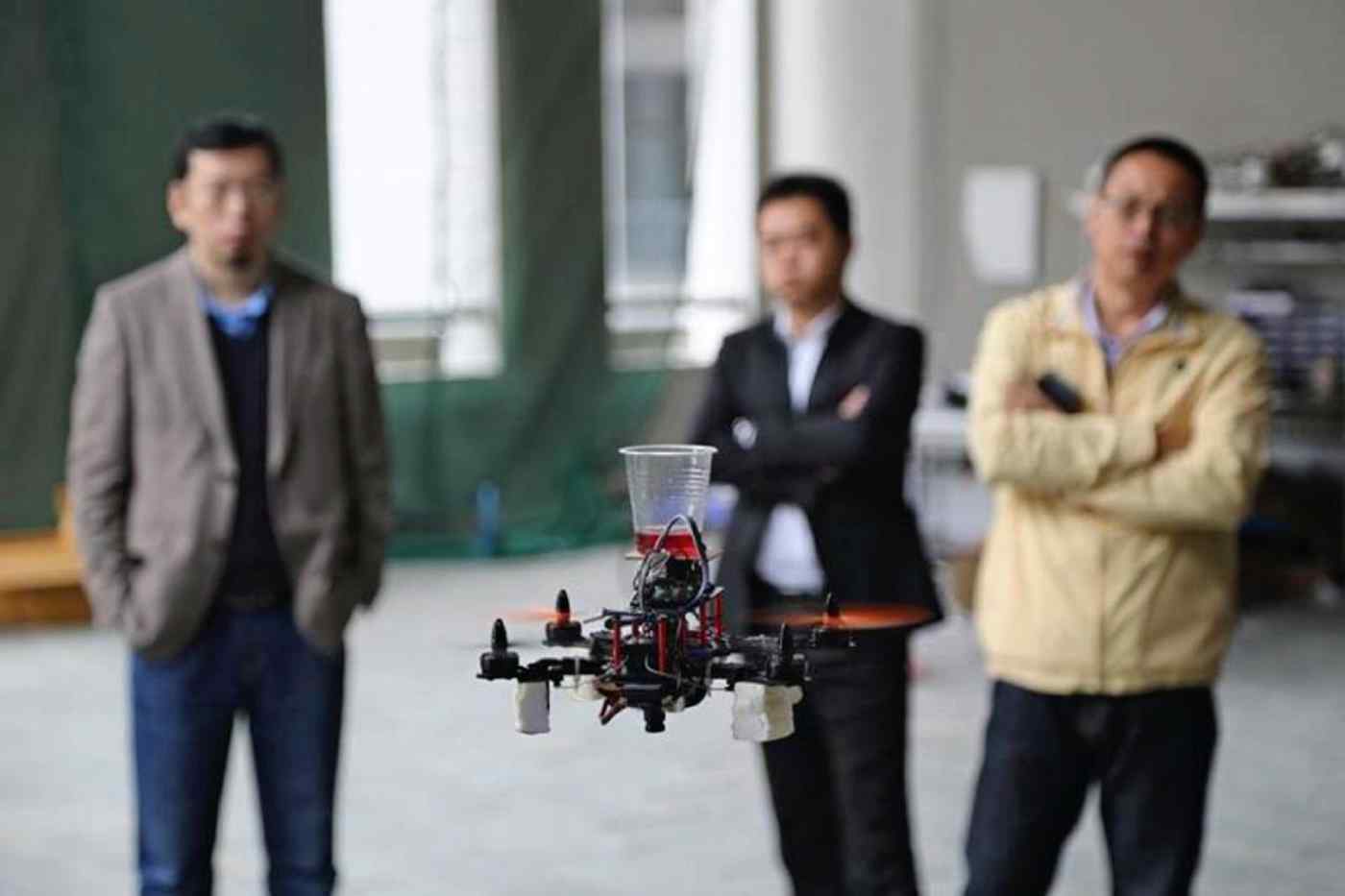 SHENZHEN, China -- In the late afternoon on a day in late May, I heard a grating "buzz buzz buzz" sound among the high-rises in the business district in Shenzhen, Guangdong Province, in southern China. I looked up to catch a sight of a drone that was flying about, blaring bizarre electronic sounds in the darkening sky.

As I watched, it dived and zoomed, then hovered above me. The movement was eerie and a bit menacing. Then I noticed several more drones buzzing around nearby. The drones with their ominous-looking black fuselages belonged to DJI, the Guangdong-based leading drone maker, which produces roughly 60% of world output of the flying machines. Engineers were test-flying their latest models as I was about to enter their office building.

First-time visitors to Shenzhen may be jolted to see the machines buzzing around, but they are already part of everyday life for residents there.

DJI's offices are housed in a high-rise building in central Shenzhen. Stepping onto the 14th floor, you enter the brave new world of the drone maker. 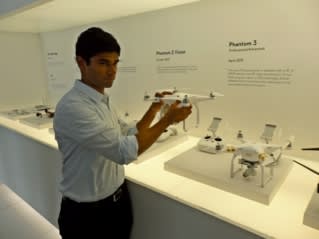 In the exhibition space at DJI, the Phantom, the company's mainstay drone, and a wide range of other products are displayed on May 29. (Photo by Yu Nakamura)

Almost everything in the office, including walls, furniture and floors, is white. In the exhibition space, the Phantom, the company's mainstay drone, and a wide range of other products are displayed.

A female receptionist was casually dressed in everyday clothing while sporting a T-shirt with a large DJI logo like all the other workers.

Unlike the offices of most Chinese companies, there was nothing old-fashioned about the office. The office is clearly designed to express the confidence of the company -- a message that says, "We are not an ordinary drone maker." The company takes seriously its image of a top maker of drones and other products.

Until a few years ago, Shenzhen, a city neighboring Hong Kong, was famous around the world as "the factory of the world," a center for mass production of a variety of electric and electronic appliances such as PCs and mobile handsets that are exported all over the world.

Starting in the 1980s, after a special economic zone was established, the city was flooded with migrant workers from rural areas all over China. At first, there were many demonstrations and labor disputes, but the landscape and atmosphere of the city as well as the awareness of its citizens quickly changed and continue to do so at startling speed.

Cai Zhaoxiong, a 35-year-old engineer at Shenzhen Smartdrone UAV, another drone maker, which is located only a few dozen meters from the headquarters of DJI, said that he was 100% sure that his company would dominate the drone market in the future. According to him, the drone industry is still in its infancy. He dismissed the idea that DJI was the industry leader.

Shenzhen Smartdrone is a startup founded last October by Edward Jin, 40, an entrepreneur and the founder and former owner of Art-Tech, a model aircraft company. Jin sold the company and established the drone maker with the proceeds.

Offerings of Shenzhen Smartdrone, which has expertise in airborne objects derived from the model airplane company, are innovative in that they can lift off almost vertically from almost anywhere. It can also transform into a more streamlined shape like an airplane while in flight, which gives it 200% longer range than other similar unmanned aerial vehicles (UAV) made by its competitors.

The company, which currently employs 50 workers, is pursuing research and development on drones at breakneck speed. It says it will put products on the market on a full scale by the end of the year and hopes to debut on the stock market in the next three to five years.

A number of budding drone makers like Shenzhen Smartdrone are mushrooming in Shenzhen. Currently, roughly 200 businesses are working on the development of UAVs in Shenzhen's Nanshan district, an area closely packed with high-tech companies and famous as the drone development hub of the world.

However, it will take some more time before the drone businesses fully take off. Reportedly, only 10 or so companies out of the total of 200 can offer commercially viable drones at the moment. The rest are still preparing their products for launch.

How did Shenzhen become a hub of drone development? According to Jin, there are three main reasons.

One is that companies in Shenzhen already boast technologies that can help drone companies develop and manufacture drones in a relatively short time.

Most early drones were shaped like aircraft and used for military purposes. The development of multicopter models that have four or more rotors and can fly in any direction significantly contributed to the growing popularity of the vehicles for civilian uses such as aerial photography.

Drones and smartphones share many components. It is no coincidence that DJI was established in 2006, almost at the same time mass production of smartphones got on track. The control unit of its drones, for example, looks almost like that of smartphone. A control unit incorporates acceleration sensor, gyro and compass that sense motion, tilt and direction and are controlled by a microcomputer. Smartphones also incorporate these components -- the only difference being that, in a drone, a microcomputer issues a command to adjust the rotation of the propellers.

Another shared feature is that both drone and smartphone are reliant on communications network infrastructure for tracking location. The operator navigates the drone with a smartphone, tablet or special controller by locating the position of the vehicle via GPS and a wireless local area network such as Wi-Fi. The operator can set the destination and video shooting mode as well as receive images from the drone in real time.

Shenzhen, the long-established home of many PC and mobile phone factories, also has a host of parts makers that supply high-quality components to end-product makers. A UAVs maker can locally procure the 2,000 to 3,000 components needed for a drone. Jin noted that this is a distinct advantage for drone developers racing to commercialize their products.

A second advantage Shenzhen offers is its large pool of engineers. At the end of 2013, the government of Shenzhen, realizing the limits of growth based on cheap labor, put together a plan to foster the drone industry as a core business of the city.

In parallel with that effort, the city government invited aviation-related research institutions of prominent universities such as Beihang University and Tsinghua University in Beijing and Harbin Institute of Technology in Heilongjiang Province, hoping to recruit and train top researchers and engineers from all over China. The effort succeeded and these academic labs are now supplying staff to drone companies in Shenzhen.

Another advantage of the drone business in Shenzhen is that it is located next to Hong Kong, the financial hub of Asia. This makes it easier for drone developers to raise funds for their projects.

Shenzhen's municipal government also offers a wide range of subsidies to drone companies. All these incentives and advantages have drawn many drone makers, including DJI, to the city, enabling them to boost their presence in the market.

The good news for end users is that competition led by Chinese manufacturers has driven prices down dramatically, and the market is sure to grow. Drone technology is evolving so fast that it is anyone's guess who will dominate the market.

A 2014 market study conducted by the Teal Group, an aerospace and defense research firm, predicted that civil and defense spending on UAVs, will double over the next decade.

However, it will probably not be easy to foster a healthy drone market. Chinese makers have piled into promising markets, but they often end up turning initially profitable products into mere commodities as they flood the market or illegally copy proprietary technologies, triggering industry chaos and debilitating price wars.