JAKARTA -- Southeast Asia hosts some of the world's leading coffee growers and exporters, such as Indonesia and Vietnam, the world's fourth- and second-biggest producers respectively.

Neighbors such as East Timor, Laos, Myanmar, the Philippines and Thailand are home to smaller coffee-growing regions.

Their beans have typically been for export. Many end up in cups in countries such as the U.S., the biggest importing country, and Italy, the third-biggest importer, according to the United Nations Food and Agriculture Organization.

Italy is also the home of espresso, the strong and sometimes bitter caffeine shot that for many drinkers is the quintessential coffee pour.

Now, coffee consumption is on the rise in what were mainly exporting countries of the region, and the race is on to see which kind of coffee will lure would-be local drinkers. According to the FAO, "as the middle classes of the developing world continue to swell, as their incomes rise and coffee remains affordable, the luxury of the occasional coffee has become a daily habit in an ever-growing number of countries."

Just as the espresso -- forcing water and steam at pressure through fine-ground coffee -- was invented as a faster way of serving coffee than the often-sluggish technologies of 19th century Europe, newer coffee-making methods are vying with more established brews for market share in Asia. "The rising demand has also afforded producers with new options and opportunities," reported the FAO.

Asian consumer tastes are indeed changing, said Nadine Alexander, spokeswoman for Java Mountain Coffee, which makes pods from coffee grown in Indonesia's West Java and Bali. "More cafes are opening throughout Asia to meet the trends of a more mobile lifestyle, which includes business people whose meeting habits are possibly shifting away from the traditional office setting, which often offers poor quality coffee," she said.

"Over the past decade, international coffee chains have built up a strong regional presence within Southeast Asia," said Davina Patel, global food and drink trends analyst at Mintel, a market research company.

That development, Patel added, has been followed by "a surge of independent cafes" that have "changed the landscape of Southeast Asia's retail coffee sector." But purveyors of the coffee pod or capsule are hoping that the sector's growing popularity among Western consumers can be replicated in Southeast Asia, where ground or brewed coffee consumption is increasing -- particularly in cities and among the region's expanding middle classes and so-called "millennials."

Pods, sometimes also called capsules, are seen as a middle ground between the taste and quality of ground and brewed coffee on the one hand, and the convenience and speed of instant coffee or sachet coffee mixes -- also popular in Asia -- on the other.

According to Mintel, pods and related products made up a quarter of all global coffee retail launches by 2014 -- a jump from 11% in 2011. Ground or bean coffee and related products stayed around the 30% mark over the same period, as Western and other developed markets saturated.

Pods are "today the fastest growing sector of the coffee business," said Giorgio Vergano, co-founder of Iris Group, established in Singapore in 2015 to make pods compatible with the popular Nespresso and Dolce Gusto machines and for sale across the Southeast Asia region.

Within the wider Asia Pacific region, according to data compiled by Mintel, Japan is the leading pod consumer, going by data on product launches with Australia, South Korea and Taiwan -- also wealthy economies -- seeing significant pod growth in the past half-decade.

But Southeast Asia looks like an untapped market for makers of pod machines and the pods themselves. From April 2012 to 2017, Malaysia accounted for 4% of coffee pod/capsule launches across the Asia-Pacific region, with Singapore on 3%, Indonesia 3%, Vietnam 2% and Thailand 1%.

Wee Hao, a former banker who co-founded Medano Coffee, another Singapore-based pod maker, described Southeast Asia as "one of the main growth markets" for coffee in general and pods in particular.

Using pods means less time cleaning or maintaining what can be an expensive coffee machine, and for hotels and restaurants, less time needed in training staff how to use the machines or in making ornate lattes from scratch. A pod machine means versatility, say fans. Customers can use an array of pods that make drinks as varied as espresso, latte, teas, cocoa, hot chocolate and more. Pod coffee retains its freshness and lasts longer than its ground equivalent, which has a relatively short shelf life once a bag is opened. "When the coffee is exposed to the air for just few hours, it starts to oxidize. This means that it will quickly turn rancid and the taste will become unpleasant. Capsules ensure the perfect freshness for each cup prepared with its full aroma," Vergano said.

But even if pods can outpace the pricier, messier but arguably tastier ground or bean coffee sector in Southeast Asia, they face competition from instant coffee or sugary coffee mix sachets -- both derided by Western coffee snobs. Market researchers at Euromonitor say instant coffee and sachets makes up a $28 billion global market, and one with room to grow in developing Asia.

According to Mintel, instant coffee already dominates the Asian retail market. "Two in five (42%) coffee launches in Asia Pacific were soluble coffee granule products, compared to just one in five (20%) launches in Europe and a mere 6% of launches in North America in 2016," the research group reported recently.

Pods also face opposition on environmental grounds. Although they can be recycled, many customers appear to be put off by the need to first wash the used plastic or aluminium capsule, or by the fact that some capsules are made of a combination of materials that sometimes require separate recycling

Pods are adding to the unknown hundreds of millions of tons of plastic rubbish that is clogging the world's oceans. A recent report in the Proceedings of the National Academy of Sciences (PNAS), a U.S.-based scientific research organization, suggested that an estimated 37 million pieces of plastic rubbish had washed up on Henderson Island, a remote Pacific atoll.

Java Mountain Coffee has come up with what it terms a biodegradable capsule that should lessen the eco-friendly workload for customers and recyclers alike. 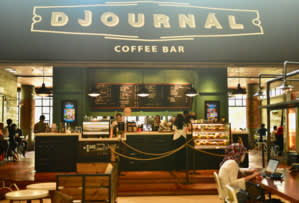 A popular coffee shop inside a Grand Indonesia, a central Jakarta mall (Photo by Simon Roughneen)

Another hurdle for expanding coffee sales -- pods included -- is price. "On average a pod is about 60 [Singapore] cents ($0.43) a cup," said Wee Hao, estimating that to be twice the European average. Considering that the gross domestic product per capita in the 10-country Association of Southeast Asian Nations was $3,867 a year as of August 2016, that puts pods out of reach for hundreds of millions of Southeast Asians. By comparison, the average GDP per head across the 28-country European Union was $32,414 in 2016.

But for a Southeast Asian consumer, the pod is nonetheless cheaper than heading to the nearest Starbucks, Gloria Jeans or latest independent, hipster-style coffee hangout, where prices are close to Western standards -- around 30,000 rupiah ($2.25) in Indonesia or 70 to 80 baht ($2.33 to $2.32) in Thailand, or 3,000 kyat ($2.20) in Myanmar. Part of that expense is down to the cost of ground-coffee machines and related products in Asia, which mostly have to be imported from the West, with tariffs imposing a cost of two or three times that of machines in Europe.

"The pod market addresses those people who want a good cup but do not have the time or inclination or income for ground coffee," said Wee Hao, noting that local versions of coffee, such as kopi susu (a sweet milky mix) in Indonesia and ca phe den da (a strong iced drip ground coffee) in Vietnam will likely remain popular.