NEW DELHI   In ancient India, there were rishis and rishikas -- men and women who used to meditate for extended periods without food, water or even clothes in the extreme Himalayan cold.

They went into the mountains because they realized their frail bodies would not be able to survive more than four or five days of meditating in, say, 35-40 C heat.

"So they went into the Himalayas and meditated there for 15 days, 20 days or 30 days and still they wouldn't die as the chilling cold reduced their bodily demands," said Pawanexh Kohli, chief executive at the National Center for Cold-chain Development. 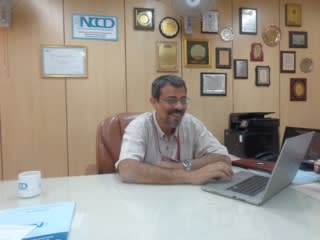 Pawanexh Kohli, chief executive of the National Center for Cold-chain Development, is a leading cold-chain expert.

Kohli told this story while explaining that the cold-chain concept is not foreign to India -- a country of nearly 1.3 billion. Except now, instead of rishis and rishikas maintaining themselves, cold temperatures are used to keep food fresh.

They also keep the economy going.

"We cannot sustain future growth unless we harness the power of cold," Kohli said.

Concern is on the rise about the 40% of India's agricultural production that gets wasted every year. It is not that India loses so much, but that it can only handle 60% of what it produces. "Our supply chain mechanism, our logistics are not able to handle more than 60% of what we produce," Kohli said. "So, everything else we produce is 100% waste."

Farmers, he said, should be empowered not by cold storage but by transportation. "There has been enough focus on cold storage in the past," Kohli said. "Farmers should be given pack houses and transport.

"The wastage happens because the food doesn't reach people."

NOT TO WORRY   India produces 575 grams worth of fruit and vegetables per person per day, Kohli said, but only 350 grams or so finds its way into someone's tummy.

Focused on cold facilities, India has ended up with a cold supply chain that is 88% storage and 12% transportation. However, Kohli said, "it should be the other way round. Food is lost if not consumed. We should maximize its reach to the market and incentivize people to create a supply chain."

India needs about 70,000 pack houses, each equipped with a precooler and dispatch room; it has 250. It is believed the country has fewer than 10,000 refrigerated vehicles. The estimated number needed? 62,000.

One of the leading Indian companies offering one-stop, countrywide, temperature-controlled solutions is ColdEX. With expertise in handling temperature-sensitive products from 25 C to minus 18 C, it serves quick-service restaurant chains, called QSRs in the country, as well as clients in the confectionary, food-processing, pharmaceutical, meat, poultry, fruit and vegetable industries.

Among its 55 clients are Cadbury, the British confectionery maker; KFC, of 11 herbs and spices fame; Ferrero, a chocolate maker; Danone, the French multinational known for its yogurt; Burger King, the U.S.-based chain; Nestle India, a food conglomerate; and Hindustan Unilever, another conglomerate.

ColdEX has been handling cold-chain logistics since 2007. "By 2013," said Chief Executive Sunil Nair, "we had started offering end-to-end solutions."

When Burger King entered India in 2014 it did not have to worry about setting up a cold supply chain. "Once they decide which product they want to sell," Nair said, "we decide how much to buy, when to buy and from whom. ... They just have to open stores and run [them] well, and the rest is all managed by us."

ColdEX has 850 refrigerated trucks, 1,500 employees, 55 branches and five warehouse locations -- in Kundli, a village in the northern state of Haryana; Mumbai; Hyderabad; Bangalore; and Kolkata.

The Kundli warehouse, with a covered area of 29,000 sq. feet, caters to clients in India's north. With 110 employees, the facility stores both dry and frozen products.

With turnover of 1.8 billion rupees ($27.0 million), ColdEX is growing at a rate of 28% year on year. It plans to have nine warehouses in the next three years after investing nearly 1.5 billion rupees.

ColdEX's refrigerated vehicles have capacities ranging from 700kg to 18 tons. "All these vehicles are capable of managing any temperature, [down] to minus 25 degrees," Nair said. 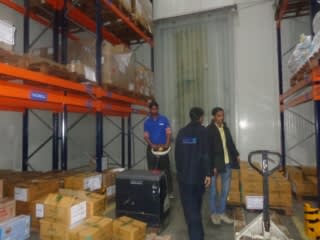 In terms of turnover, Cadbury is the company's top client. Nestle India, Burger King and KFC are among the top 10. "Other than McDonald's," Nair said, "almost all QSRs are with us now."

There is enough demand in India to keep 300 to 400 cold-chain logistics companies busy, Nair said.

"As of now," Nair said, "there is no foreign company in the field."

Japan-based Innovation Thru Energy offers energy-saving cold storage technology. Its plate-shaped IceBattery helps containers store products at a constant temperature between minus 25 C and 25 C for up to a week.

The device costs less and lasts longer than dry ice. In Japan, it is used by pharmaceutical wholesalers, retailers and logistics companies.

In India, ITE helps deliver salads and milk. One of its clients is Salad Days, which supplies salad and freshly squeezed juice to homes and offices in the Haryana city of Gurgaon and in the neighboring Indian capital.

Salad Days delivers 350 bowls of salad every day. Its motorcycle-borne delivery personnel carry eye-catching silver boxes, each equipped with an IceBattery. Inside the boxes, the temperature is maintained at 2 to 5 C, even during the summer, when outside-the-box temperatures can reach higher than 40 C.

WASTE NOT   The greatest concern of Salad Days co-founders Varun Madan and Kunal Gangwani is keeping their products fresh. "We could not maintain [the] freshness of vegetables for more than three days in a conventional refrigerating room," Madan said. "So unsold vegetables had to be discarded.

"Now we are able to keep vegetables fresh for 10 days because of the refrigerated box, which uses the IceBattery." ITE is based in Japan, but its chief executive and president happens to be Indian. Pankaj Garg arrived in Japan in 1988 as an engineer for a steelmaker, grew impressed with Japan's manufacturing industry and decided to stay. He set up ITE in 2007. The idea for the IceBattery came from his experience with cold storage technology that he acquired while working for a semiconductor maker.

FUTURE GROWTH   ITE intends to reform India's entire milk logistics network, which starts with small dairy farmers who do not have refrigerated vehicles or storage rooms. This makes it difficult for them to sell their milk to leading companies.

"The raw milk cannot keep its freshness for more than four hours," Garg said, adding that ITE has developed an IceBattery-refrigerated container that is able to maintain the freshness of raw milk three times longer than a conventional container.

ITE conducted a two-year pilot program with the Japan International Cooperation Agency in suburban New Delhi. The intention was to create job opportunities for rural women by enabling them to sell cold milk.

In January, upon completion of the program, ITE signed a memorandum with the Andhra Pradesh state government under which it now provides its technology to the region's milk and processed-food cold-chain networks.

When McDonald's came to India two decades ago, India's cold-chain logistics were in a nascent stage, according to Rajesh N. Shetty, the distribution director of Yum! Restaurants India, which operates KFC, Pizza Hut and Taco Bell outlets in the country.

"As more such [multinational corporations] entered India," Shetty said, "a lot of emphasis was put on ... the cold chain from end to end. Now the focus is from farm to the plate."

About 60% of KFC products, especially poultry, is frozen or cold-chain dependent. Pizza Hut and Taco Bell are in the 20% to 25% range. Yum! has 800 outlets in India, with KFC being its fastest-growing brand. By 2020, Yum! expects to have 2,000 eateries in the country.