Companies buy their way into new markets ahead of AEC

SINGAPORE -- Businesses in the Association of Southeast Asian Nations are stepping up their cross-border acquisitions and investments as they prepare for the bloc's planned economic integration this year. 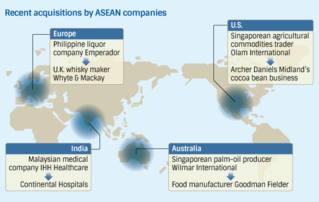 In the second half of 2014, ASEAN companies complete a total of 41 deals in which they purchased a stake of 5% or more in a business in an emerging, or "high-growth," country, according to accounting company KPMG, an increase of 21% from the first half of the year. It was also the highest number of such deals by any country or region, including China and Russia.

The number of ASEAN companies that invested in businesses in developed nations rose 14% over the same period.

The above figures exclude Singapore, even though it is part of ASEAN. Investment by Singaporean companies in other ASEAN countries more than doubled between the first half and second half of 2014.

Companies are stepping up their mergers and acquisitions as a way to gain quick access to overseas markets ahead of the start of the ASEAN Economic Community. "The upcoming formation of the [AEC] provides impetus for greater regional integration," said Benjamin Ong, head of KPMG Singapore's M&A section. The AEC is expected to facilitate the flow of goods within the bloc.

Acquisitions of companies in Southeast Asia have been increasing because potential suitors are looking to expand their manufacturing bases, sales channels and distribution infrastructure to take advantage of the AEC.

Fraser and Neave, for example, a major Singaporean beverage company under Thai conglomerate TCC Group, has invested in and purchased beverage companies in Vietnam and Malaysia to open up new sales channels.

Big-name Singaporean companies, making the most of their connections with ethnic Chinese businesses, have completed major acquisitions in Hong Kong with an eye toward gaining better access to the Chinese market.

Other ASEAN companies, looking to obtain technology and know-how, have acquired European businesses.

In Malaysia, meanwhile, economic headwinds have thwarted some of its companies' acquisition ambitions.

In January, No. 2 Malaysian bank CIMB Group scrapped plans to merge with two peers in order to focus on restructuring and other turnaround efforts.