Companies in focus: Homegrown services give Asia the online video it really wants BALI, Indonesia Asian TV has long been known for its rice-porridge programming. Public broadcasters reigned over the region, and their shows rarely deviated from the monotonous. Now Asia's video-streaming services are fighting pitched turf wars -- among themselves, with regional players and against the big U.S. pioneers.

Among these, iflix, HOOQ and Hotstar seem to be edging ahead of the pack, even proving tough enough to take on the likes of Netflix and Amazon.com.

Last year, the focus was on Netflix CEO Reed Hastings; the conference convened shortly after the company announced its global launch in 130 markets, including some in Asia. This year, as neither Netflix nor Amazon sent top leaders, the spotlight was on the chiefs of local players.

The summit's focus reflected reality: Neither Netflix nor Amazon is gaining dominance in any market in Asia.

Both U.S. companies currently offer subscription-based video streaming in every Asian market except China, where online media providers are required to store content data on the mainland and to practice self-censorship. Elsewhere in Asia, the markets are dominated by local and regional providers.

During the APOS gathering, Netflix announced that it has decided to take a back door into China -- it is licensing iQiyi, a video-streaming business run by Chinese search engine giant Baidu, to carry some of its original shows.

Bill Holmes, global head of business development at Netflix, told the Nikkei Asian Review that the company has no intention of launching its streaming service in China "at this moment." 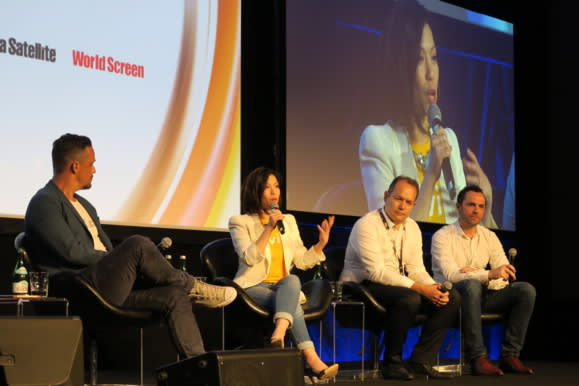 An APOS panel discussion in Bali on April 26

In Southeast Asia, meanwhile, Malaysia's iflix and HOOQ of Singapore are building a visible presence in the region and beyond. And in India, Hotstar is becoming the top online streaming service as the number of mobile broadband users in the country rapidly increases.

All three of these companies are backed by global capital. Iflix is funded by Liberty Global of the U.S., Sky of the U.K., Zain of Kuwait, PLDT of the Philippines and U.S. merchant bank Evolution Media Capital. HOOQ is a joint venture by Singapore Telecommunications, Sony Pictures Television and Warner Bros. Hotstar is a subsidiary of India's major multichannel TV programmer Star India, which is a 21st Century Fox company.

"We are No. 1 in Indonesia, and we believe we are co-leading in the Philippines and in Thailand," said Peter Bithos, chief executive of HOOQ, without disclosing any specifics.

Bithos emphasized the importance of original local content to beat competitors, announcing the launch in Indonesia of "Critical Eleven," a movie that HOOQ jointly produced with Indonesian film studio Kharisma Starvision Plus.

Iflix likewise has an abundance of local shows, both original and purchased, on its shelf. On the other hand, Netflix and Amazon have wide operations across Asia but are not strong in local content. Mark Britt, co-founder and chief executive of iflix, brushed off the U.S. competition. "We don't believe the thesis that Netflix is going to achieve a global monopoly is true," he said. He emphasized iflix's strategy of optimizing its service, including pricing, for ordinary consumers in emerging markets.

He said iflix's service requires lower network speeds and allows customers to download content before watching, making it suitable for those in countries with slower networks. And the service is priced in the $2 to $3 range everywhere, far lower than Netflix's monthly fees of around $10.

Already, iflix has launched services in Vietnam, Myanmar, Sri Lanka, Pakistan and Saudi Arabia. It is preparing to enter Nigeria and Ghana. "We go to the places nobody else cares about," Britt said. According to him, iflix has grown to around 5 million customers since it launched in 2014.

Both Bithos and Britt sounded confident that they are reaching a larger population than Netflix, which they say is aimed at a smaller group of high-income consumers. "Netflix is like a $1,000 iPhone," Britt said, "while iflix is a $200 Android phone."

WHERE CRICKET IS KING In India, Hotstar is rapidly adding viewers with a hybrid business model that combines free, ad-supported content and a subscription-based service for premium content. It added sports programs -- cricket matches in particular -- to make the subscription option more compelling to Indian viewers.

The company charges about $3 per month for live sports matches and new movies, while nonpaying users can watch cricket matches on a five-minute delay.

The cricket matches were the big catalyst. The total number of app downloads on iPhones and Android handsets reached 200 million in February, up from 50 million in March 2016. "Paying subscribers are increasing," said Hotstar chief executive Ajit Mohan, without disclosing numbers.

Referring to the widespread view that charging for content in India is unfeasible, Mohan said: "I don't believe it. We actually opened up that window in the last two years."

Hotstar kept all its video content free of charge until last spring, when it also started streaming cricket matches. "Our first task was to build the category [of mobile online video]," Mohan said.

An industry source in India who recently researched the monthly active users of major video-streaming apps for iOS and Android in India found that Hotstar is leading the pack by a wide margin. 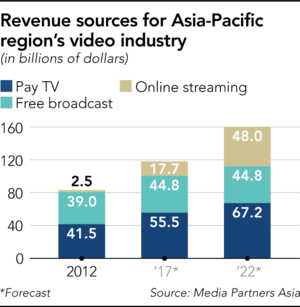 In March, Hotstar's monthly active users totaled 57 million, while the app for Reliance Jio Infocomm's mobile video service attracted 48 million. Other players, including Netflix and Amazon, had fewer than 10 million monthly active users in March. Netflix's numbers that month were about 9% more than in September. Hotstar grew by 89% during the same period.

NO EASY ROUTE Asia's video streaming industry is expected to grow rapidly over the coming years.

Media Partners Asia, the consultancy that organizes the APOS event, predicts total Asia-Pacific revenue will grow 2.7 times from $17.7 billion in 2017 to $48 billion in 2022. That would double the region's share of the global industry from 15% to 30%.

Revenue from free broadcast TV, on the other hand, is expected to remain flat at $44.8 billion through 2022, falling behind online streaming.

Digital TV Research of the U.S. predicts that on-demand video services will reach 428 million subscribers across 200 countries in 2021. It sees China accounting for 74 million, second only to the U.S.

Vivek Couto, co-founder and head of Media Partners Asia, declared in Bali that the line between traditional TV channels and online video platforms will "dissolve" in the next few years. "Basically," he said, "everything will merge."

With so many players competing in so many markets, it is too early to predict who will eventually prevail. One certainty is that no market will be easy to conquer, not even for Netflix or Amazon.