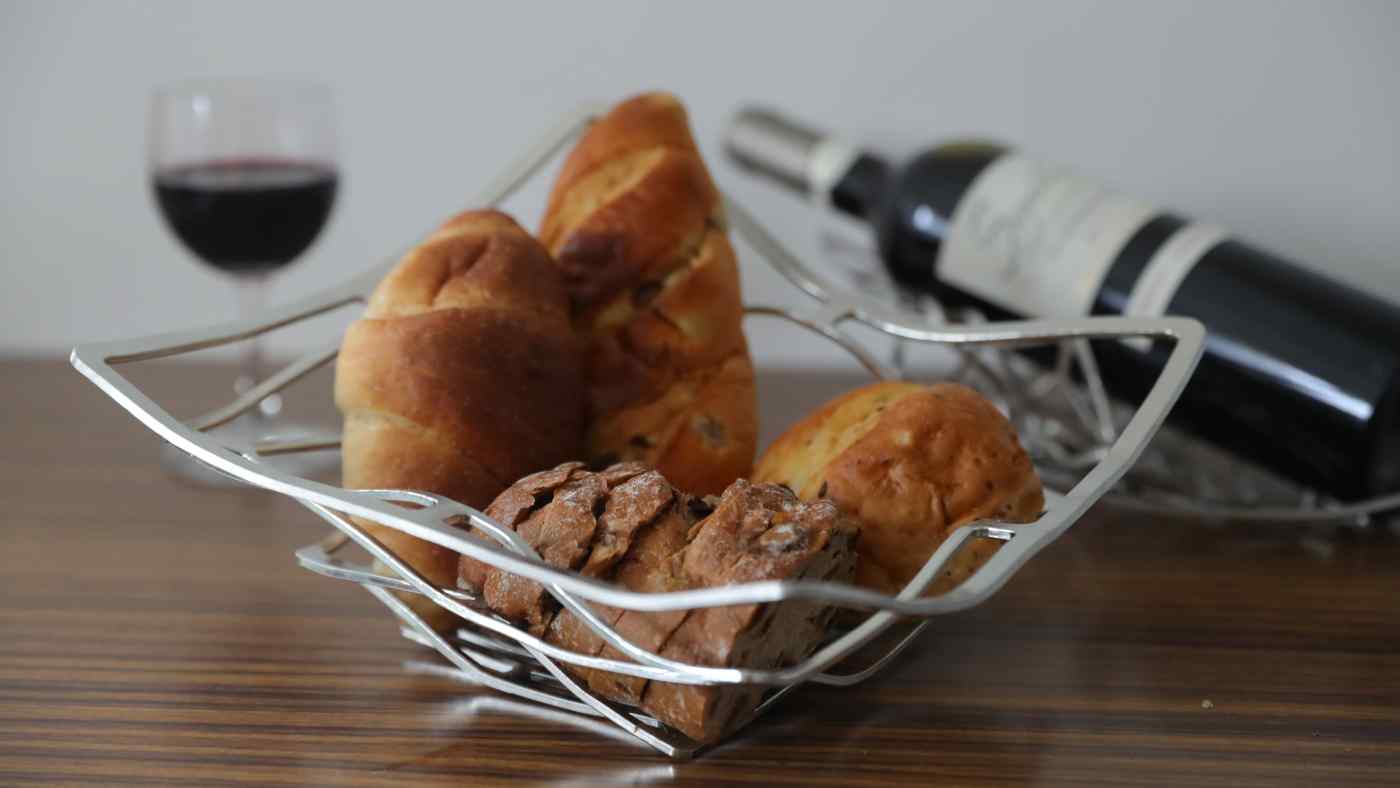 After Japan's bubble economy collapsed in 1991, a traditional copper caster began working with hard-to-shape tin and now turns out pieces like this flexible basket that has made its way to New York's Museum of Modern Art. (Photo by Ken Kobayashi)
NANA SHIBATA, Nikkei staff writerMay 4, 2020 11:32 JST | Japan
CopyCopied

TOYAMA, Japan -- When the then director of an elite French restaurant saw some tableware at an exhibition in 2014, he fell in love. His boss, globally renowned chef Alain Ducasse, felt the same -- and now those objects grace their restaurant tables.

What caught the eye of Ducasse and his staff were pieces made of 100% pure Japanese tin -- "unique" objects with a softness about them and great artistic skill, according to Olivier Guenot, the director in charge of tableware for Ducasse restaurants.

"Tableware gives a first impression to guests when they arrive in our restaurants and we attach great importance to the link between container and content," says Guenot.

The dishes come from Takaoka in Toyama Prefecture -- a town about 270 kilometers northwest of Tokyo with more than 400 years experience of metal casting. Toshinaga Maeda, a local feudal lord, brought the idea of casting to Takaoka to nurture local industry during the Edo period between 1603 and 1868, the final era of Japanese traditional government before the Meiji era, the country's period of modernization.

The modern-day producer of the tableware that now adorns tables at Ducasse restaurants from Paris to Macao is Nousaku, a company based in Takaoka. Established in 1916 and with about 160 employees currently, the family-owned company had long been subcontracted to produce Buddhist accessories and flower vases and utensils for the tea ceremony. It traditionally worked mainly in copper.

Under the leadership of current President Katsuji Nousaku, from the fourth generation of the founding family, the company has drastically changed its product line, with successful results. Its best-known product, a flexible basket made of tin, is even on display in the Museum of Modern Art in New York and is sold in its souvenir shop. Nousaku sake cups made of tin are displayed at its factory in Takaoka. (Photo by Ken Kobayashi)

Tableware has a rich history in Europe, which is home to a number of well-known brands -- Royal Copenhagen, Baccarat, Wedgwood and others -- and the company has designs on this area.

"[We will] challenge Western brands by making our products and design more and more attractive," Katsuji told the Nikkei Asian Review.

There are examples all over Japan of local industries losing their luster due to lifestyle changes, and the same has happened in many parts of Asia that have experienced economic development. But Nousaku's story and its dramatic transformation from a small Japanese subcontractor can be a model for many Asian companies.

Katsuji's shift to tin changed the course of the small little-known company, which had been struggling with declining orders.

Although the city of Takaoka had dominated almost the entire Japanese casting market, the market itself was in danger of being left behind as people's lifestyles became more Westernized and fewer had Buddhist accessories at home. 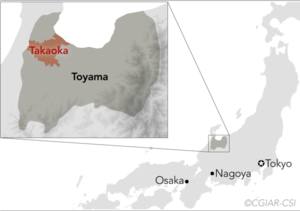 From its peak in 1990, the city's copperware sales dropped 72% to 10 billion yen ($93 million) in 2018, according to local authorities. The bursting of Japan's bubble economy in early 1990 accelerated the contraction of the market.

To bring the company out of the shadows, Katsuji, who joined the company in 1984, looked for a material to make into products that could be more useful in modern, everyday life. It also had to be a material that would fit with the company's technology and processes, to avoid new capital investments.

For a long time, Nousaku had only sold its products to wholesalers. "We did not know who were the end users and we could not see consumers' reactions. That's why we decided to create our own designed products," Katsuji said. "Without making our own products, we cannot receive praise."

He set out two key concepts for the company to make its own products -- "design" and "good material."

Finally, Katsuji decided to shift his business focus to tin. But it was not the usual sort of tin products, for which Singapore and Malaysia had a long history as suppliers.

To make headway in the industry and differentiate from Asian producers who supply alloys of tin and other metals, Katsuji decided to use 100% pure tin. He wanted to challenge the material in a way that no one had tried before.

"I hate saying impossible," he says, adding that his key philosophy is "try out anything as it is fine to make mistakes, the worst thing is doing nothing."

While copper and brass are hard materials that Nousaku had been working on skillfully for some time, tin is a very soft material and hard to shape. Katsuji carried out his own research and development for finishing tin using his decades of experience in the craft sector.

The company found many advantages of using 100% tin after its research and development. "Drinking alcohol with tin items is said to have a mellow taste. [For example], orange juice may not be sour, smooth or soft," said Chiharu Nousaku, a company director and fifth generation family member.

Nousaku is even developing medical devices, making use of tin's antimicrobial properties.

In 2009, Nousaku opened its first own-branded shop in Tokyo. Three years earlier, it had rolled out its foldable tin container, still the company's hottest seller. "Our own shops are the place where we can tell the stories behind the products, not just display them," Chiharu said. Currently, the company owns 13 stores in Japan and is increasing the number of shops every year.

Now, tin products make up 80% of its revenue of about 1.5 billion yen ($13 million), while the traditional business, including Buddhist accessories and tea ceremony goods, contributes less than 10%, according to the company. "Tradition should not just be protected, it should also be challenged in order to survive," Katsuji stressed.

Despite its domestic expansion, Nousaku is not satisfied, feeling that the size of the market is limited. So it is looking beyond Japan. Its overseas sales account for about 3% of the total.

At the end of December, the company announced a joint venture with Taiwanese company, Lota Group. Nousaku hopes to produce kitchen utensils and tableware that fulfill local demand by teaming up with Lota, which has global sales channels and cutting-edge metal machines such as 3D printers.

To win in the global market, "we need to make products that take advantage of local needs," Katsuji said of his vision to become a multinational brand. His company has started operations in more than 20 countries and regions, including the U.S., France, Southeast Asia and the Middle East.

In addition to showcasing its products at international trade shows everywhere from Europe to Asia, the Japanese maker has also collaborated with French designer Sylvie Amar to promote professional use of the tin tableware collection.

And back at home, Nousaku's factory is another attraction for existing and potential customers who are interested in its manufacturing processes. Its plant in Takaoka, which has a population of around 170,000, has visitor numbers of about 130,000 per year, including 5,000 foreigners, who come to witness its tin casting processes and take part in workshops. Tin melted at a high temperature is put into a mold and made into tableware or home decorations. (Photo by Ken Kobayashi)

The entrance to the factory looks very much like an art gallery, with displays showing collections of molds to make tin products. Further inside, a cafe offers lunch and sweets served on Nousaku tableware.

"I have Japanese handicrafts such as earings and glasses at home, but I always wanted to make them myself," Cindy Yeung, a 32-year-old tourist from Hong Kong, said during a tin casting workshop. "I did not know about the company, I like tin-made products. They are not plastic, which is a common material in Hong Kong." She made her own tin sake cup at the factory, before visiting a nearby sake brewery.

Nousaku considers Asia to be its key market and is targeting its wealthy classes, with the aim of achieving 36 billion yen ($331 million) in revenues by 2023, in conjunction with its Taiwanese joint venture partner.

With ten years of experience in foreign markets, Katsuji and his team have discovered that there are different consumer tendencies in each region. For example, in Europe, it first needs to build trust and raise brand awareness among hospitality businesses such as luxury restaurants and hotels, in order to be able to attract local consumers in the longer term.

"It is wrong to push our culture to foreigners. We have to understand their culture first, otherwise our products will not sell," Katsuji said.