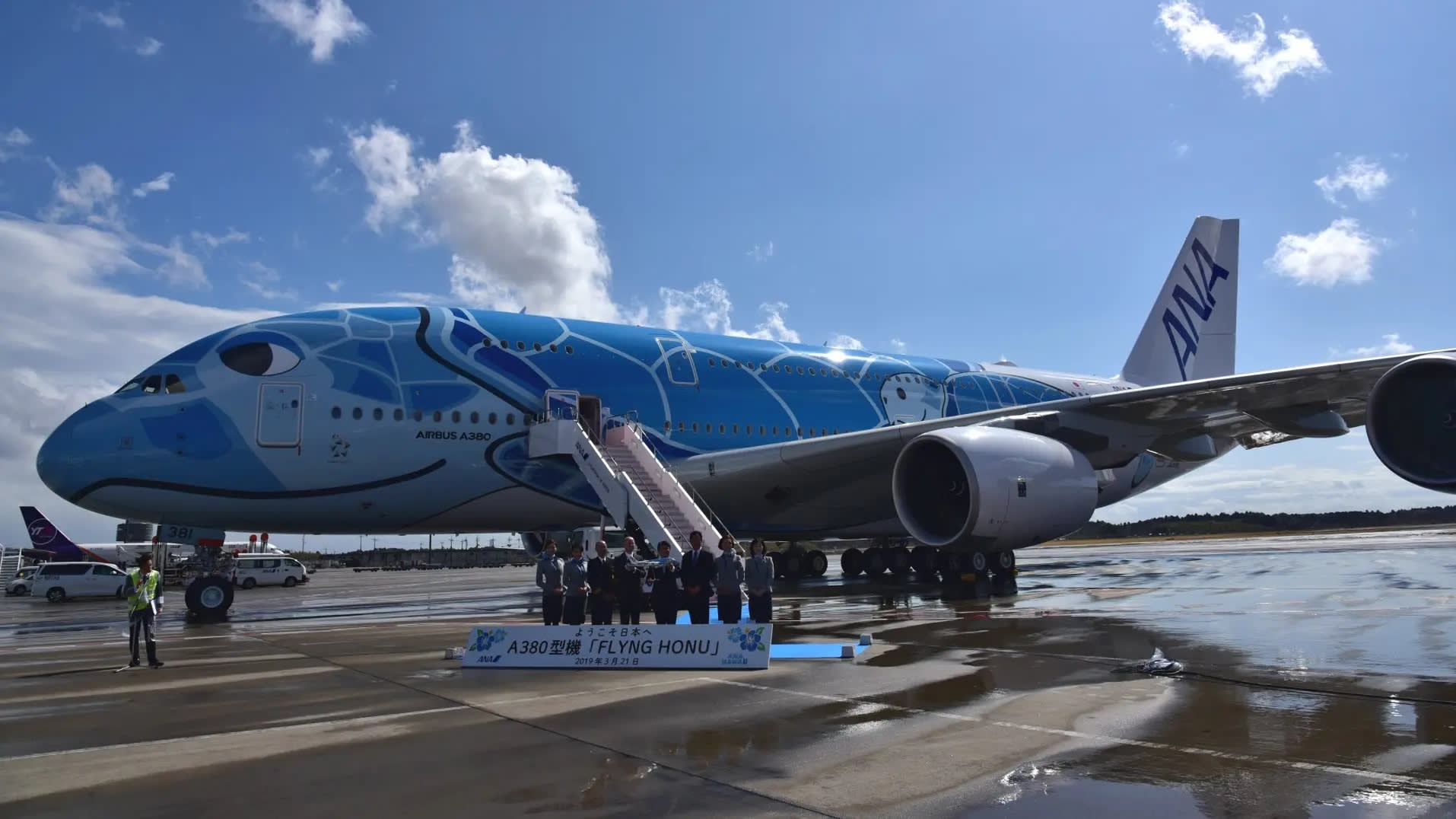 The Airbus A380 is painted like a sea turtle in homage to flights it will serve to Hawaii. (Photo by Shuntaro Fukutomi)

TOKYO -- ANA Holdings' first Airbus A380, the biggest passenger plane in the world, made its maiden arrival Thursday at Narita Airport near Tokyo, with flights to begin May 24.

Dubbed the "flying hotel," the double-decker airliner seats 520 people, or twice the capacity of a normal jumbo jet. ANA, the parent of All Nippon Airways and Japan's largest airline group, is bucking the global trend of shifting to smaller aircraft by introducing three A380 planes on its Narita-Honolulu route, a holiday favorite for the Japanese.

Fittingly, ANA's first A380 is painted to resemble a sea turtle, a symbol of luck and prosperity in Hawaii.

Among the unique amenities ANA prepared are eight first-class suites on the upper deck, which are walled off, and a number of "couch seats" in economy class that can be converted into beds by raising the footrest.

Airlines such as Emirates and Thai Airways already fly the A380 on their Japan flights, and Singapore Airlines is planning to launch a daily A380 flight to Narita from April.

But the airline industry as a whole is shifting toward smaller, more fuel-efficient planes. Airbus announced recently that it will discontinue production and delivery of the A380 after 2021. ANA plans to introduce 30 narrow-body Boeing 737 Max planes after 2021.

"We believe the A380 will become a game-changer for ANA and will enable us to increase our market share by doubling the number of seats connecting Honolulu and Tokyo by 2020," said ANA President Shinya Katanozaka.

"The interior is extremely quiet. We're making arrangements to ensure safe and enjoyable travel," he added.

Fifteen Japanese companies are involved in the production of the A380. Mitsubishi Heavy Industries provides the cargo doors at the front and back of the plane, Subaru supplies the rim of the vertical tails, and the carbon fiber for the body is prepared by Toray Industries and Teijin.