Japanese retailer is doubling investment in the fast-growing region 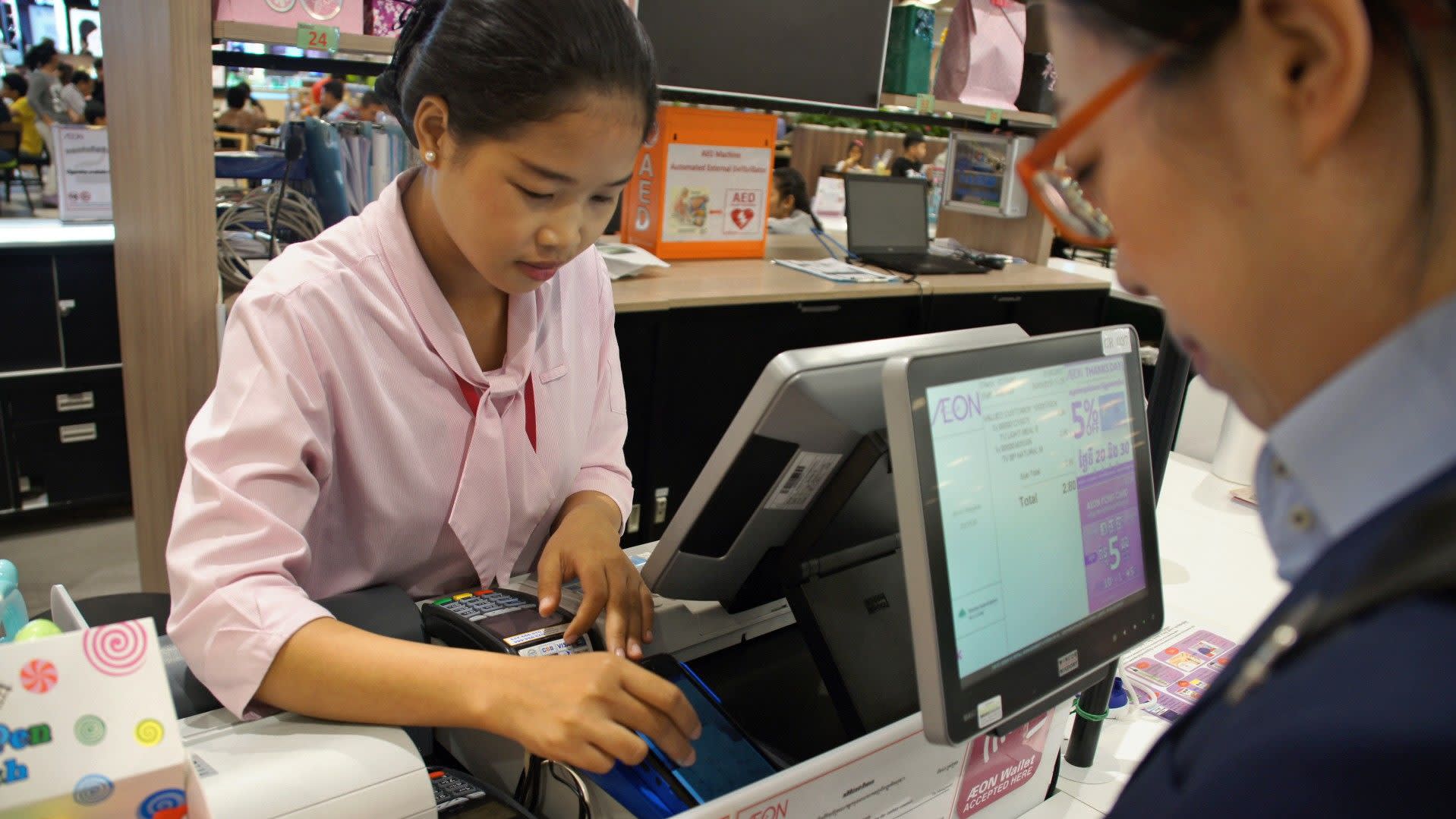 TOKYO -- Japanese retailer Aeon is employing digital tools at brick-and-mortar stores in its quest to remain competitive in the rapidly evolving markets of Southeast Asia.

The company's Aeon Mall Sen Sok City, which opened in May in the Cambodian capital of Phnom Penh, is not only a popular destination with a water park and indoor amusement park, but also an exhibition of cutting-edge technology.

The mall's tenants offer shoppers a convenient way to pay with mobile payment services like Cambodia's Pi Pay: All users need to do is register the app, deposit cash in designated kiosks around town, and scan a QR code at the storefront. Aeon aims to employ financial technology such as this more.

This spring, Aeon became the first Japanese retailer to roll out a digital wallet service in Cambodia's currency riel. The company is also developing terminals for mobile and credit card payments, with plans to debut them at its own stores and those of other merchants.

Aeon looks to use data collected through the e-money service and payment terminals in analyzing top sellers and developing private-brand products, as well as planning store openings. "To become more competitive, it is essential to gather and use data efficiently," said Keiji Ono, president of Aeon (Cambodia).

Southeast Asia is one of Aeon's key international markets. Operating revenue in the region rose 7% to 334.9 billion yen ($2.94 billion) in the year ended in February, with operating income surging 33% to 24.8 billion yen.

Southeast Asia is home to roughly 1,300 Aeon sites, including shopping centers, supermarkets and financial service locations, and close to triple the scale of its 470 stores in China. The company is doubling its investment in Southeast Asia to 83.2 billion yen in the year to February 2019 from last fiscal year, far more than the 30.3 billion yen earmarked for China.

The market is growing fast. Recent deregulation in Vietnam has spurred foreign businesses to plan a wave of store openings, while Myanmar eased restrictions on overseas investors just this May. The retail market in six countries belonging to the Association of Southeast Asian Nations will grow about 20% to $631.7 billion over the five years to 2022, U.K. research company Euromonitor International predicts.

The challenge is that the rapid emergence of online merchants like Singapore-based Lazada, a unit of Alibaba Group Holding that operates in six ASEAN countries, is making the conventional retail reliance on brick-and-mortar store networks a strategy of the past.

Add to this mix Grab and other ride-hailing leaders, which are launching shopping and financial services businesses in the region, and the result is ever-intensifying competition among players from different industries.

This makes it all the more critical for Aeon to leverage both its brick-and-mortar strength and cutting-edge technologies.

To develop new earnings sources, Aeon is forging a broad range of partnerships. It teamed with Honestbee, Asia's biggest concierge shopping service provider based in Singapore, in February to operate an online grocery store together in Malaysia. Aeon also teamed with Japan's Fuji Television Network to broadcast programs for children and sell related merchandise in markets like Cambodia and Vietnam starting next year.

"We're going to adapt to changes in consumer tastes and developments in different markets, and pursue a range of opportunities," said Motoya Okada, Aeon's president and CEO.