Africa is becoming a hothouse for startups iHub is one of the incubators for startups based in the Bishop Magua Centre in Nairobi, Kenya.   © Ken Moriyasu
SHOTARO TANI, Nikkei staff writer and KEN MORIYASU, Nikkei deputy editorAugust 9, 2016 11:00 JST | Africa
CopyCopied

NAIROBI, Kenya/TOKYO -- In a dimly lit office in a five-story building on Ngong Road in the Kenyan capital, young Africans flip off their shoes, crouch on a sofa and tap away at their laptops. On the wall is a poster that reads,"How to start a startup." Rule No. 2 tells would-be business owners to find "what is missing in the world."

Welcome to the Bishop Magua Centre, a home to tech accelerators and some of Kenya's growing tech companies. On a continent still coming to grips with rapid economic growth, a lot of things are missing. Entrepreneurs have noticed and are feeding a vibrant startup scene that is transforming Africa. For Edward Mbogo, what was missing was a comfortable ride to work. Like most Kenyans, he commutes via matatu -- one of the many privately owned minibuses that zigzag through Nairobi. He used to fear for his life, as reckless drivers sped through the crowded streets trying to squeeze in more fares. The deafening music did little to distract him.

So he came up with an app called MyRide Kenya. On a Twitter-like platform, Matatu passengers review the minibuses and drivers. "KBV95XX was clean and had free Wi-Fi on board," reads one. "This driver was caught speeding, but paid the policeman a bribe," complains another. The owners of the buses -- some of whom operate fleets of as many as 400 vehicles -- have embraced the service and pay Mbogo around U.S. 20 cents per bus per day to tabulate their drivers' score cards.

For attorney Angela Wanjohi, what was missing was a one-stop online shop to create legal documents quickly and efficiently. Rather than pay a lawyer $100 an hour for two hours to create a company registration document or draft a will, her startup, Uwakili, helps people create basic legal papers by answering a few questions on her app. 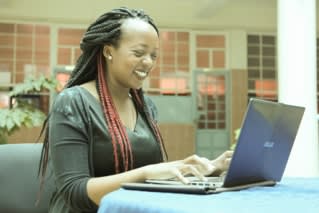 We think there is a potential market of 18.3 million adult Kenyans who have legal obligations to fulfill and have access to the internet," Wanjohi said. Her expanding clientele pays her company through mobile payment services m-pesa and Airtel.

Kenya's startup movement began gaining traction around 2007, when Kenyan communications company Safaricom launched m-pesa. "Kenya is now the world leader in mobile payments," said Safaricom's CEO Bob Collymore. The service, whose name means mobile "money" in Swahili, allows people without bank accounts to make deposits, withdrawals, transfers and pay for goods with a mobile phone. In a country where workers in cities often send money to their families in the countryside, the safety and freedom from bribes and bureaucracy offered by m-pesa has quickly won customers. Within three years, the service had 9 million registered users, equal to 40% of Kenya's adult population. Bob Collymore, the CEO of Safaricom

"It saves time, it adds traceability and it is transparent," Collymore said of the service. He believes corruption is the single biggest problem hobbling African economies. Another Safaricom brainchild is "Faini Chap Chap," which lets motorists pay fines for traffic violations on the spot through their mobile phones. It helps people avoid long lines at court, and thus the need to pay bribes to jump to the front.

M-pesa has spread beyond its home market and is now available in 10 countries, including India. More importantly, it has become a payment platform for many other Kenyan tech startups.

This could not have happened without the spread of mobile phones through the continent. Most Africans access the internet using mobile phones, and mobile subscriptions grew by sevenfold in the 10 years to 2015, according to the International Telecommunication Union. The proliferation of mobile phones gives entrepreneurs a platform for their businesses.

One Ghanaian named Bright Simons seized his opportunity in health care. "Over 30% of medicines in many developing countries, including parts of Africa, can be fake." That was the estimate the World Health Organization came up with in 2006. Counterfeit medicines, mostly from China and India, wreaked havoc in Africa and were blamed for thousands of deaths.

Enter Simons. He had won a scholarship to study astrophysics at Durham University in the U.K., but shunned a career in academia to start his own business in Ghana, with a view to stopping the spread of counterfeit drugs. "We wanted to see how we could improve the [life] outcomes [in places] where we come from. We looked at areas like health, which is still a very huge area. We realized that the issue of counterfeit medicine was rife," explains Selorm Branttie, global strategy director at mPedigree, Simons' company launched in 2007.

The company offers an elegant solution. Pharmaceutical companies using mPedigree's system place a scratch card number on the back of medicine packets. The buyer can then confirm that the medicine is genuine by sending a text message to a central database. 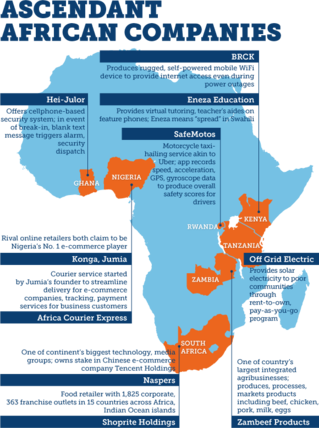 "Our collaboration with the authorities in Nigeria helped them to put up a very good surveillance system," said Branttie. "Counterfeiting in Nigeria in 2007, according to WHO, was around 40%, but those figures are below 9% now. Malaria medicines were some of the most counterfeited medicines, and introduction of our system meant that lot of those [numbers] either went very low or were eliminated."

MPedigree has since moved beyond pharmaceuticals and into products such as cosmetics, auto components, textiles and seeds. It has partnerships with companies from Vietnam, India and Indonesia.

McKinsey expects more mobile phone penetration in Africa. By 2025, it expects half of sub-Saharan Africa's population to have internet access, with 360 million connecting via smartphones. It estimates internet businesses could contribute as much as 10%, or $300 billion, to the region's gross domestic product. Cash is flowing in as investors look for opportunities.

According to a report by Disrupt Africa, a website that offers assistance to startups, 125 new African tech ventures raised $185 million in funding in 2015. DMM.com, a Japanese e-commerce site and venture capital company, says it will invest $100 million in African startups over the next five years. "The talent is high and the market will expand exponentially," says DMM's representative in Africa, Stephane Fouche. "Our mission is to readily put into practice African people's own ideas and decision-making."

But look beyond the heady numbers and entrepreneurial buzz and one soon hits a roadblock: Some 634 million sub-Saharan African lacked electricity in 2013. Electrification rates in countries like Kenya, Uganda, Ethiopia and Zambia are below 30%.

One Nairobi-based venture founded in 2011 offers a partial solution in the form of solar-powered battery systems. Composed of three lights, a mobile phone-charge and a solar-powered radio, the system provides a few of the essentials of modern living. A down payment of 3,500 Kenyan shillings ($34) and daily installments of 50 Kenyan shillings puts the unit within the reach of people with modest incomes.

M-Kopa says that as of July, it "has connected over 375,000 homes to affordable solar power," and that "current customers will make projected savings of $280 million over the next four years."

Jason Njoku, founder of iROKO, Africa's answer to U.S. movie streaming service Netflix, believes only good will come out of the continent's vibrant startup scene. "So many stories about Africa focus on the negative," says Njoku. "We are an African brand that celebrates and promotes African culture. We are building an African company from the ground up that, hopefully, other young Africans can be proud of. I believe we've also given lots of young African entrepreneurs hope, knowing that they, too, can build a company for the future."