US company expects growth beyond the 'gray zone' under new law

"We have been in kind of a gray area for quite a long time, and this is basically saying home sharing is here to stay," the co-founder of the world's biggest home-sharing marketplace told The Nikkei in a recent interview.

"I think this is going to be incredibly important for the Japanese economy," he added, noting the rise in vacant homes as the country's population shrinks.

Founded in 2008, the U.S. company operates in 191 countries, and Chesky said it is no stranger to legal hurdles to its business model of matching travelers with people willing to rent out their homes.

"Once Airbnb partners with cities, becomes legitimate, recognizes these laws and collects hotel taxes, usually the growth can increase significantly," the 36-year-old chief executive said. "I think in this case the growth in Japan will increase dramatically once it is recognized." 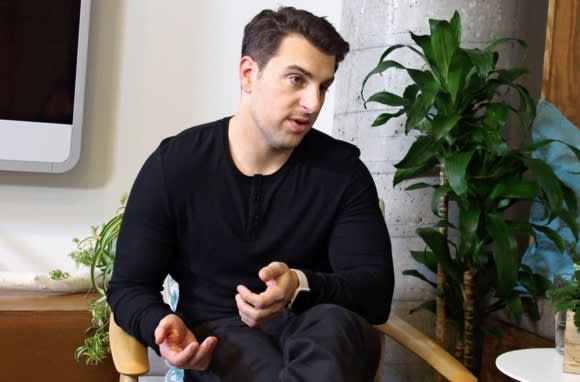 Airbnb has about 60,000 homes listed in Japan, where home sharing is not recognized in the decades-old hotel law. To take in paying guests, homeowners must either register their properties as guesthouses or live in one of a few special zones designated by Prime Minister Shinzo Abe's government for deregulation. Many others have been skirting the law.

"We have 450,000 homes in France," Chesky said. "There is no reason that Japan cannot be that size or larger."

"It might take 10 years -- I do not know how long it will take -- but I think it will be a step change," said the chief executive, whose company is used by 5.8 million people a year in Japan.

Tokyo, Kyoto and Osaka "are three of our fastest-growing cities in the world," he said, adding that Osaka "is overtaking a lot of the largest cities globally."

The new home-sharing law, which goes into effect June 15, will allow homes to provide accommodations for paying guests up to 180 days a year. No certification will be required, although homes will need to register with their municipality. But some cities are moving to adopt local restrictions that would limit days of operation further as residents complain about noise, garbage and other problems.

"When the law is clarified, more people will embrace" home sharing in Japan, Chesky predicted.

In seeking to expand its Japanese business, Airbnb faces competition from Chinese player Tujia and home-grown contender Hyakusenrenma. One avenue for growth its providing travelers with experiences -- like visiting out-of-the-way temples -- not just lodgings.

Chesky said Airbnb's "experiences" segment is "growing significantly faster than where homes were" at that stage in the business. "This is only with 5,000 experiences. We have more than 55,000 experiences on the waiting list."

As for an initial public offering, the CEO said Airbnb does not have a timeline, but it will not happen this year. The company had a valuation of $31 billion after a fundraising round last year.

"I think that it is incredibly important that you institutionalize your intentions on who you want to become before you face the pressures of being public," he said.