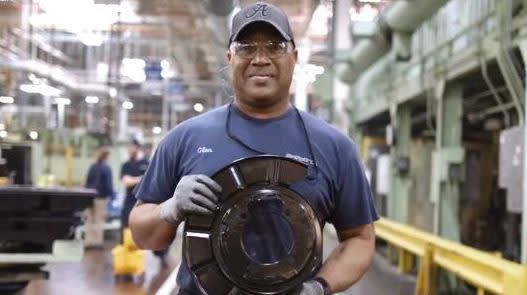 Akebono Brake emphasized its U.S. operations, even featuring in a commercial highlighting contributors to the American economy. (Photo by Masayuki Shikata)

TOKYO -- Troubled Japanese automotive supplier Akebono Brake Industry will accept a 20 billion yen ($185 million) infusion from a domestic rescue fund and ask lenders to waive nearly half of its loans, carving out the financial breathing room to focus on a turnaround plan.

The company said Thursday that it will issue preferred shares to rescue fund Japan Industrial Solutions in exchange for the infusion, with the plan set for a shareholder vote in late September. The brake supplier will meet with creditors on Monday and on Sept. 18 to negotiate waivers on about 50 billion yen in loans, Nikkei has learned.

Faltering operations in the U.S. drove Akebono into financial hardship. After entering the market in the 1980s, the company now runs four American plants, including one purchased from Germany's Bosch. Already pressured by mounting labor and transportation costs, it lost orders from General Motors and ended up filing for an out-of-court rehabilitation process in January.

The company is considering shutting down multiple facilities. "It will take at least three to five years to resurrect the American operations," Akebono Chairman and President Hisataka Nobumoto said at the end of last year. "We need to transform into a production structure that corresponds to our scale."

Akebono is a rare Japanese supplier that is not attached to an automaker through the keiretsu system -- a close-knit network of companies held together by equity ties and other business relationships. The infusion from JIS is reflective of that independence, since preferred shares carry no voting rights. This arrangement will allow Akebono to maintain business with a wide spectrum of carmakers.

JIS was established in 2016 by MUFG, Mizuho, SMBC and the Development Bank of Japan. As part of its mission of helping distressed companies revive themselves, the fund purchased stakes in targets such as Sharp and Nippon Sheet Glass.