SHANGHAI/NEW YORK -- Alibaba Group Holding built its empire on China's e-commerce market, but the company is laboring to end its reliance on online sales as the economy teeters by following Amazon's lead into cloud services.

"I always check Alibaba first to check prices or see what is popular now," said Li Mei, a 28-year-old woman in Shanghai. For her, like many Chinese, a life without Alibaba is unimaginable. The e-commerce websites now draw more than 600 million users per year.

Alibaba guides prices and trends in China, much like Amazon.com in the U.S. Although both companies are the most recognizable e-commerce brands in their home countries, they have entirely different profit structures.

Looking at results from the October-December quarter, Amazon has an overwhelming lead in sales. Alibaba, however, is far more profitable, with a net profit margin of 28% compared to just 4% for Amazon.

Alibaba's e-commerce business largely consists of virtual stores from other companies on its Taobao and Tmall marketplaces, and it receives fees from those sellers. So, unlike Amazon, Alibaba has not invested heavily.

Their distribution models are also polar opposites. Alibaba outsources most of its logistics to curb costs, while Amazon builds its own warehouses. 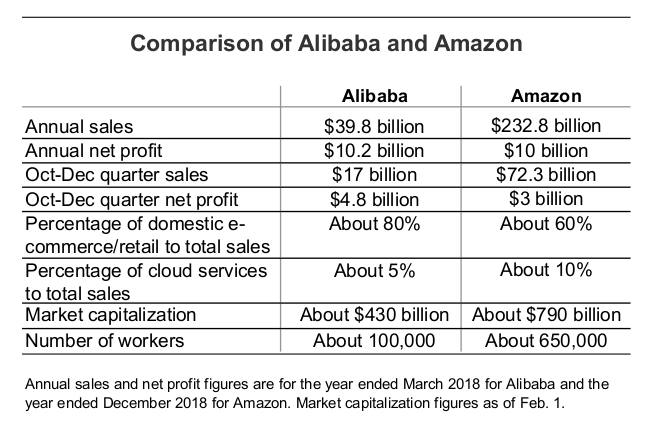 Despite such high profitability, Alibaba has begun to sense an impending threat from its heavy reliance on the domestic e-commerce business. Profit levels for e-commerce are likely to fall off in the future, and many in the company believe that action must be taken while online sales are still strong.

Chinese retail sales at physical outlets and online rose just 9% in 2018, the first time growth has failed to hit double digits since 2003. Under such conditions, online sales can no longer provide an anchor for Alibaba.

This sense of urgency has led Alibaba to take a page out of Amazon's playbook and invest in highly profitable cloud services. Although initial investment for data centers is high before companies rent them, margins can be extremely lucrative once market share is expanded.

Alibaba already has opened data centers in the U.K., Indonesia and India. It also decided to build a second facility in Japan last month. The company currently operates cloud services in 19 countries and regions.

Amazon, however, still boasts about 52% of sales for cloud services worldwide, while Alibaba controls just around 5%. The Chinese company is investing heavily to catch up with Amazon, but its cloud business remains in the red and is still far from profitability. 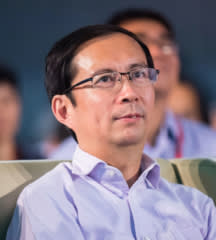 Besides the cloud sector, Alibaba is also making large investments in what it calls "new retail" -- the integration of online and offline shopping -- to reduce its reliance on e-commerce.

Unlike its online marketplaces, which rely on participation by other companies, Alibaba is planning to open its own shops. It has invested more than $9 billion in department stores and supermarkets over the last few years and will use artificial intelligence to analyze data from these investments to cultivate consumer demand.

Hema Xiansheng, a brick-and-mortar supermarket operated by Alibaba, opened about 100 locations last year. The business has yet to become profitable, however.

The same goes for overseas operations. Alibaba is continuing to invest heavily in markets that it views as promising. The company has room to grow in Southeast Asia with 600 million people and India with 1.3 billion people compared to saturated markets in China, North America and Europe.

But Amazon sees similar prospects in those regions. The two companies are still in the investment stage as they compete to take stakes in local partners.

Alibaba CEO Daniel Zhang, who is expected to replace founder Jack Ma as chairman when he retires in September, has said that China will continue to drive growth.