Amazon and Alibaba square off in Southeast Asia

The battle for e-commerce dominance is just getting started

BANGKOK -- Shoppers in Southeast Asia have long been wondering when Amazon.com will start offering its e-commerce services in their region.

Local and regional e-tailers have been wondering the same thing. Taking the U.S. giant's eventual arrival as a given, they have been racing to fortify their own positions, none more so than Alibaba Group Holding. The Chinese internet behemoth has been stepping up its offensive since 2016, when it became clear that Amazon was on its way.

Amazon finally landed in Southeast Asia on July 27. For many market players and analysts, this signals the start of a long and fierce battle between the Eastern and Western champions of e-commerce. But the arrival is likely to have repercussions far beyond Amazon and Alibaba, changing the fundamental dynamics of competition for players in every market in the region.

Amazon has begun its foray by dipping its toe in the small but dense urban market of Singapore, bringing its Prime Now service, which is tailor-made for urban residential areas.

According to the company, the service offers two-hour delivery on tens of thousands of items, including groceries, daily-use goods such as shampoo and diapers, and home electronics. Prime Now is offered only through a dedicated app, however. The company stopped short of opening a full-service website for Singapore, a move that has drawn some complaints on social media.

Limited though this first sally may be, Amazon has faithfully replicated its signature asset-heavy "click-and-mortar" business model in Singapore, setting up its own massive warehouse, or "fulfillment center," as the company calls such facilities.

"We use advanced techniques and algorithms to fulfill orders as quickly and efficiently as possible with processes such as random stow, batching and machine learning," said Ivan Lim, Amazon's Singapore logistics site leader, at a launch event held inside the new center.

S. Iswaran, Singapore's trade minister, was also in attendance. He said he expects Amazon's technologies to produce "significant gains in labor productivity and infrastructure utilization, as well as near real-time delivery of goods in the city." The Singapore government is also happy with the arrival of a new large-scale employer. According to Lim, the site already employs hundreds of workers.

Regarding plans to expand the geographic scope of service in Southeast Asia, Henry Low, director of Prime Now for the Asia-Pacific region, said in an interview with Bloomberg: "I am super-excited about prospects in Southeast Asia, with its burgeoning [middle-class] population. This is a great place for us to be in." Many took this as a declaration that Amazon is eager to enter other Southeast Asian markets and will use Singapore as its base camp for regional expansion. The company declined to elaborate on Low's remarks.

Southeast Asia has been lagging in terms of the penetration rate of e-commerce. Now it is turning into a market that promises higher growth for the foreseeable future. Joint research by Temasek Holdings and Google estimates that the Southeast Asian e-commerce market was worth just $7 billion in 2016 and predicts it will reach $22 billion in 2020 and $88 billion in 2025, a more than twelvefold increase in a single decade. Separate research by Business Insider estimates that Amazon accounted for 43% of annual online retail sales in the U.S. in 2016. The combination of these statistics implies that Amazon's online retail business in Southeast Asia could potentially grow to nearly $40 billion a year if it achieves a similar level of dominance as it has in its home country.

The company's 12-month net sales through June 2017 were $150 billion, of which $47 billion, or 31%, came from e-commerce outside of North America. Net online sales within North America grew 24% over the same period, compared with 19% for the rest of the world. Expanding its overseas business by adding yet-uncultivated markets like Southeast Asia would provide a big boost for the company.

It is expected that Amazon will tackle the more-developed Southeast Asian economies one by one, stoking already fierce competition there among online retailers and the payment services that interact with them.

In China, Amazon is not even on the same battleground as Alibaba, despite having built up its logistics and service infrastructure in the world's most populous economy. But in Southeast Asia, neither has a significant foothold yet.

So far, Alibaba has chosen acquisitions and equity investments as shortcuts for entering India and Southeast Asia, rather than building local services from scratch like Amazon usually does.

In spring 2017, Flipkart, India's No. 1 local online retailer, offered to form a merger with Snapdeal to better compete with Amazon. But Snapdeal announced on July 31 that it had decided to walk away from the deal and "pursue an independent path." Flipkart's major shareholders include Alibaba's Chinese rival Tencent Holdings, eBay, the U.S. consumer-to-consumer marketplace giant, and South Africa's Naspers.

Amazon entered the Indian market in mid-2013 and now offers a full range of services, including Prime membership, Prime Now delivery and Prime Video streaming services. It is now believed to be churning out the same level of online retail sales there as Flipkart. As Amazon is reportedly outpacing its local rival in terms of sales growth, what Flipkart's next move will be after failing to acquire Snapdeal is drawing much interest. 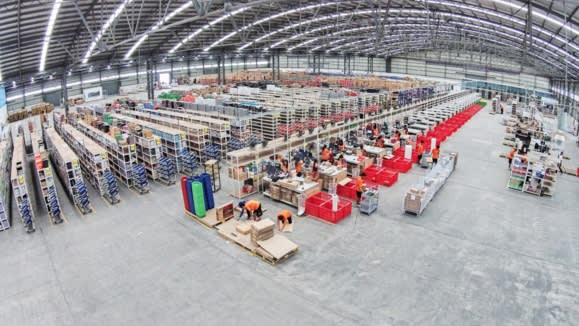 Alibaba's investment in Lazada is estimated to have topped $2 billion, by far the company's largest overseas equity investment.

Lazada operates a localized shopping website in each market it has entered in the region. According to numerous market estimates, these services are the largest online business-to-consumer marketplaces by gross merchandise volume in Indonesia, Malaysia, the Philippines, Thailand and Vietnam. In Singapore, it is trying to catch up with Qoo10, whose shareholders include eBay and Singapore Press Holdings.

With funds raised through the equity issuance to Alibaba, Lazada acquired RedMart, a Singaporean online grocery startup, in late 2016 amid anticipation that Amazon would first enter Singapore with the grocery-centered Prime Now service. That expectation has turned out correct, putting RedMart on the front line against Amazon.

In April this year, Alibaba payment arm Ant Financial Services Group took control of Lazada's payment division, HelloPay, and decided to rebrand it as Alipay in each country where it operates: Indonesia, Malaysia, the Philippines and Singapore.

Lazada is not the only local vehicle Alibaba is riding in the form of acquisitions and joint ventures in Southeast Asia. 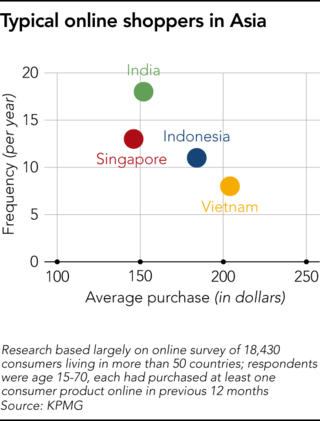 In Thailand, Ant Financial has invested in Ascend Money, the payment platform division of Ascend, which is itself the digital business arm of Charoen Pokphand Group, the country's biggest conglomerate. Ascend Money provides mobile payment services under the TrueMoney brand in Thailand, Indonesia, Philippines, Vietnam, Cambodia and Myanmar.

Alibaba established its own logistics center in Malaysia this year to make it easier for Malaysian businesses to sell through Alibaba's Tmall service, one of the top online retailers in China.

At a glance, Alibaba has stamped its footprint in far more service segments and geographical markets in Southeast Asia than Amazon, while Amazon has established a slight advantage in India. The industry and investor focus going forward will be on how Amazon expands in Southeast Asia and how the two giants will compete with other regional and local players.

The following are major regional and local players expected to play a role, directly or indirectly, in the Alibaba-Amazon showdown.

A longtime major shareholder of Alibaba, SoftBank seems to be focusing on India and Indonesia in its internet startup investments outside of China. In the field of e-commerce and payment, Snapdeal and Paytm of India and Tokopedia of Indonesia have been the Japanese company's major footholds, though it recently decided to invest in Grab of Singapore.

The company is also said to be seeking a stake in Uber Technologies of the U.S., Grab's single strongest competitor, but Masayoshi Son, chief of the Japanese telecom and internet giant, is playing his cards close to his chest on this particular point.

Tencent has been relatively slow in establishing a presence in e-commerce markets outside of its home market, partially because its multifaceted services all depend on its Chinese-language chat platform WeChat and its English-language version has not established dominance in any market so far.

Now, however, there are signs that it is becoming more proactive in Southeast Asia. Tencent recently invested in Go-Jek of Indonesia, the top ride-hailing and delivery service in the country, according to multiple media reports. Go-Jek is using the newly raised funds to diversify into digital payments and other fintech areas, as well as to prepare for an eventual expansion of its ride-hailing services to other Southeast Asian markets.

Tencent has been a major shareholder in online game developer Garena, which recently renamed itself Sea Ltd., since 2013. Sea created consumer-to-consumer marketplace Shopee, which now offers localized services in all five major Southeast Asian economies. Headquartered in Singapore, Sea is thought to be the most valuable tech startup in Southeast Asia.

In China, JD.com is the strongest rival to Alibaba's Tmall in the business-to-consumer e-commerce market. While it has been busy challenging Alibaba's dominance in major Chinese cities, JD also established logistic infrastructure and an online storefront, JD.id, in Indonesia through a joint venture with local venture capital Provident Capital Partners. Today, JD.id is among the top five business-to-consumer shopping sites in the country in terms of web traffic.

Thanks to the regional popularity of South Korean cosmetics and fashion, SK Planet's online retail service is gaining traction in Malaysia, Indonesia and Thailand. Its joint venture with Axiata Group of Malaysia operates 11street Malaysia and Elevenia in Indonesia, while it runs 11street Thailand on its own. SK Planet is an internet subsidiary of SK Telecom, one of South Korea's major mobile telecom carriers.

South African media conglomerate Naspers may become one of the biggest winners among equity investors in the Asian internet business. Its 33% stake in Tencent is valued well above $100 billion, and it has placed equity bets in both India and Southeast Asia. Its portfolio companies include Flipkart of India and Lelong of Malaysia (through Dutch investment subsidiary Myriad International Holdings) in the e-commerce segment.

Rakuten was an earlier investor in Southeast Asian internet businesses, but it has mostly retreated from the region. It opened its own online business-to-consumer shopping malls in Indonesia, Malaysia and Singapore but closed them in early 2016. It sold its ownership of Thai retail site Tarad to its former owner around the same time. Rakuten's venture capital arm is a shareholder of Carousell, which is competing decently in such markets as Malaysia, the Philippines and Singapore.

Tokopedia is competing fiercely with Lazada for the No. 1 spot in Indonesian e-commerce, starting from a consumer-to-consumer marketplace platform. Having attracted such prominent venture investors as Sequoia Capital and SoftBank, Tokopedia has always been regarded as one of the star startups in Southeast Asia. Now it is rumored that Alibaba and JD.com, a close ally of Tencent, are offering equity investment to Tokopedia, leaving the company facing a tough choice between the twin titans of the Chinese internet industry.