Most recently, it unveiled an AI chip powering facial recognition for iPhone X in mid-September -- a foretaste of the coming battle over next generation applications in the area of AI.

Another sign of Apple's intentions came with its decision to join the consortium led by U.S. private equity firm Bain Capital that is paying 2 trillion yen ($17.7 billion) for the memory chip unit of embattled Japanese conglomerate Toshiba. 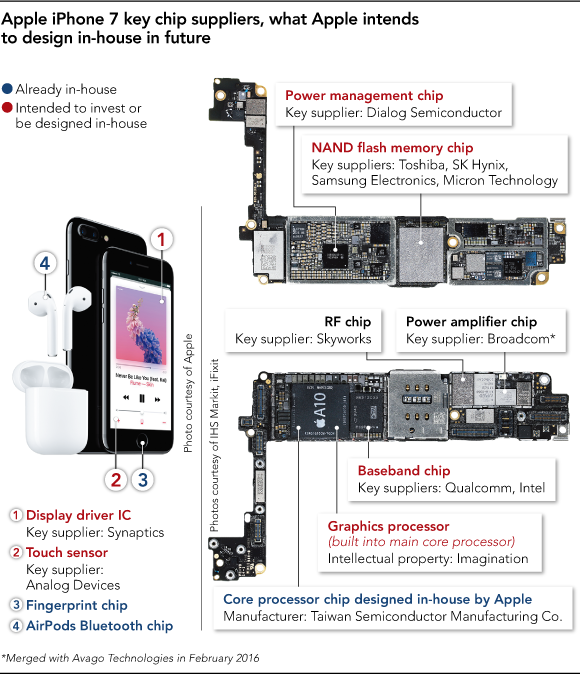 The Cupertino, California-based company ranked as the world's No. 4 chip design house by revenue at the end of 2016, trailing only Qualcomm, Broadcom, and Taiwan's MediaTek, according to research firm IC Insights.

Chips are the essential components for powering computing functions inside electronics. They appear inside a wide range of gadgets, including notebooks, smartphones and connected devices.

"By designing its own chips, Apple can better differentiate itself from others. Further, depending too much on other chip suppliers in the age of artificial intelligence will deter its development," said Mark Li, a Hong Kong-based analyst with Sanford C. Bernstein.

Shirley Tsai, an analyst at research company IDC, said it is vital for a major tech company to foster its own semiconductor capabilities to stay ahead of the game in the AI age.

"No matter if you are Apple or Google, in the era of artificial intelligence, you will need to develop your own algorithms and software to fit your new applications and to build up your ecosystems that have as many partners in as many domains as possible," said Tsai.

Doubling down on chip power

Industry sources and analysts suggest that Apple is keen to expand its semiconductor capabilities further. They say the company is interested in building core processors for notebooks, modem chips for iPhones, and a chip that integrates touch, fingerprint and display driver functions.

"We believe that more system houses will design their own chips. The purposes are to develop and protect their proprietary technology information, to make more efficient chips for their unique need, to lower [costs] and to do inventory control better and keep all logistic operation confidentially," Samuel Wang, a U.S.-based analyst at research company Gartner, said.

Bernstein's Li said that Apple has invested in research and development for baseband modem chips responsible for mobile communication. Currently, it purchase these from Qualcomm and Intel.

"It would not be surprising that Apple develops its own [modem chip]," he said.

But Li added it is was unlikely that Apple could quickly roll out such components within two years. Modem chips have a very high threshold to develop and need to fulfill requirements of different operators worldwide.

A veteran chip industry executive estimates that it would require more than a minimum one thousand engineers to work on such a project. 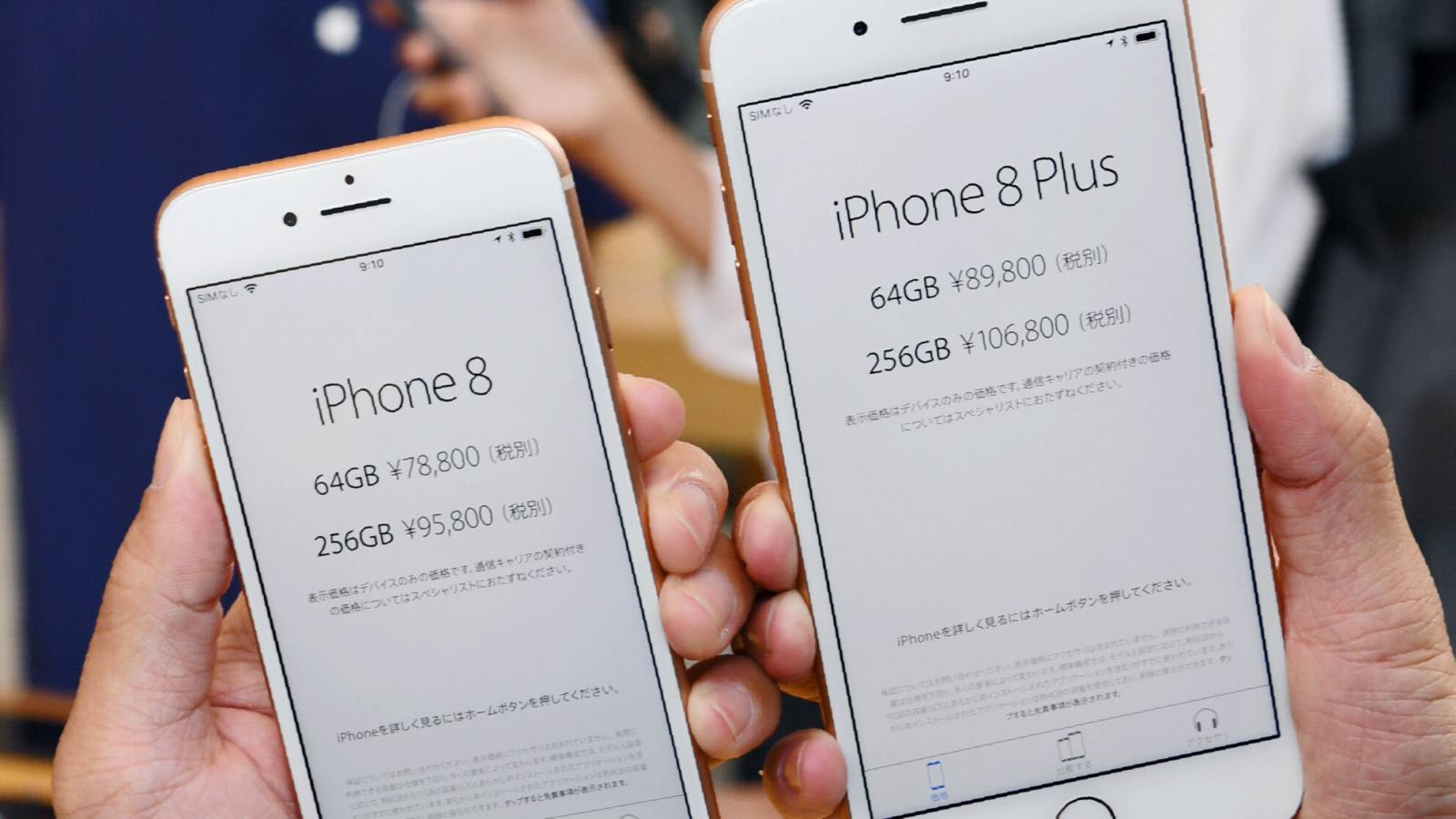 Core processor chips for the MacBook range is another area Apple is trying to venture into.

Two industry sources say that Apple is trying to cut its dependence on Intel when it comes to notebook chips and instead build those using ARM architecture, referring to the SoftBank-controlled British chip designer.

"Notebooks are becoming thinner, while consumers are demanding better mobility and longer battery life. That gives ARM's architecture, which is known for its power efficiency, a very good opportunity," a chip industry executive said.

Intel's X-86 architecture chips have dominated the PC and notebook market for several decades as they are strong for computing, while ARM controls 95% of market share for mobile devices.

Apple also aims to design its own chips that could integrate touch, fingerprint and display driver functions, sources say.

"Apple has hired engineers from Taiwan's No. 1 display-driver chip designers Novatek and panel makers of AU Optronics as it wants to control next-generation display technology and some related key components," said a Taiwanese chip industry manager.

Analog Devices and Synaptics are Apple's key touch sensors and display-driver IC suppliers for the moment.

The world's largest company by market cap further bolstered its chip ambitions by recruiting talent from Broadcom, Texas Instruments and others to grow its team. It also hired former Imagination Technologies' chief operation officer late last year before announcing it would build its own graphics processing chips.

Apple is currently advertising 200 chip-related positions on its website.

The U.S. tech giant's efforts to turn itself into a chip powerhouse have unsettled some suppliers.

Qualcomm's earnings have taken a hit due to ongoing legal warfare between Apple and Qualcomm, beginning in January, over the latter's licensing-fee model for the modem chip.

Apple has asked its assemblers not to pay royalties to Qualcomm. It has further turned to Intel to supply some modem chips after its five-year contract with Qualcomm expired last year.

Qualcomm has relied on Apple and Samsung Electronics for 40% of its revenue of $23.5 billion in the past fiscal year. The U.S. chipmaker's revenue and net profit dropped year-over-year over the past two quarters. Its shares have lost some 21% since the beginning of the year.

In early April, British graphic processing chipmaker Imagination Technologies revealed that Apple would stop buying its products and instead begin to design its own within two years.

Imagination's market value dropped by more than 60% immediately after the announcement. In late September, the Hertfordshire, England-based designer agreed to be sold for 550 million pounds to China-backed private equity firm Canyon Bridge, pending on regulatory approval.

Dialog Semiconductor, a key power management chip provider to Apple, saw its shares fall 14% in one day in early April after an analyst warned the iPhone maker would design its own such component. Apple poached a group of engineers from the German-listed company and its stock has not quite recovered since.

Other key suppliers such as radio frequency chip provider Skyworks Solutions, audio and voice chip provider Cirrus Logic, motion sensor maker InvenSense all rely on Apple for a large portion of their revenue. Their shares closely mirror the movement of the Apple stock.

Still, not all of Apple's chip suppliers are facing a potentially grim future.

Foundry service providers which make chips for Apple may actually grow on the back of its efforts to build its own chips, as the U.S. company does not plan to operate its own semiconductor production facilities, industry sources said.

Apple has become TSMC's largest client since 2015 and it accounted for 17% of the Taiwanese chip titan's revenue for all 2016. The contribution would exceed 20% for all 2017, according to Bernstein's projection.

According to an industry source, Apple has already begun to engage TSMC to develop and test core processor chips for the iPhone range coming out in 2018.

Meanwhile, TSMC said on Friday that it will build a production facility for cutting-edge 3 nanometer chips in southern Taiwan, reaffirming an announcement made by a senior Taiwanese official late last year.