"We will continue to expand production capacities and grow market share after we take over Siliconware Precision," Chairman Jason Chang told reporters Tuesday.

"We don't think we could lose any orders from this consolidation," Chang said, adding that the semiconductor industry is reaching a point when "the big one will become even bigger."

ASE cleared final hurdles in February for its 170 billion New Taiwan dollar ($5.82 billion) purchase of Siliconware Precision, the world's No. 4 chip packaging and testing firm by sales. The two Taiwanese companies will be controlled by a new entity, ASE Industrial Holding, which will relist in Taipei on April 30, as a wave of consolidation sweeps the global semiconductor industry amid a search for new growth catalysts.

ASE clients include Apple, Qualcomm, Broadcom, Nvidia, MediaTek, NXP Semiconductors and Huawei chip arm HiSilicon Technologies. Siliconware Precision shares a similar customer base, with the exception of Apple. The major production facilities for both companies are in Taiwan and mainland China. 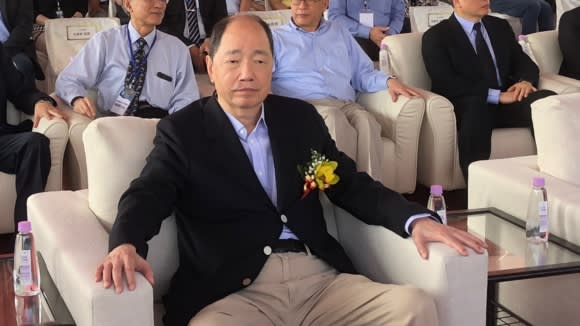 Jason Chang said a US-China trade war could hurt almost every industry but he expects the two countries to resolve their current dispute. (Photo by Cheng Ting-fang)

Chang said his company does not fear competition from China, as building a competitive chip industry takes an accumulation of efforts.

"We recognized that China is pouring a large amount of funds into the chip sector," he said. "But we don't think they can really poach that much qualified engineering talent in a short period of time and become a formidable rival overnight."

Yet Chang recognized the great investment and business opportunities in China even as Beijing and Washington negotiate to avoid a trade war.

"We will continue to look for new opportunities to further participate in China's capital markets, and we are evaluating whether we want to spin off more units to list in China," he said.

ASE listed its electronic-parts producer unit Universal Scientific Industrial, also an Apple supplier, in Shanghai back in 2012. The accelerating Chinese capital market often offers higher price-earnings ratios. USI currently enjoys a P/E ratio of more than 20, higher than the ratio of about 15 for parent company ASE's listing in Taipei.

Also on Tuesday, ASE broke ground on a $416 million new facility in the southern Taiwanese city of Kaohsiung, part of the company's commitment to build six advanced sites over five years starting in 2016 that could be worth a combined $3.43 billion.

The Kaohsiung facility, set for completion in early 2020, will help the company capture the growing opportunities in assembling and testing high-end chips for automobiles, artificial intelligence and communication.