SHANGHAI/HONG KONG -- The wide-ranging global apparel empire built by China's Shandong Ruyi Group appears intact for now after the company said it had paid off a closely watched debt.

Creditors, however, have gotten nervous as bills for the deals have started to come due, in particular a $345 million offshore bond that had been scheduled to mature on Thursday.

Jining City Urban Construction Investment, a company owned by the local government in Ruyi's corporate hometown, tried to cool worries with 3.5 billion yuan ($499.4 million) of support in late October, guaranteeing some of its domestic bonds and becoming its second-biggest shareholder.

However, Cinda International Holdings, a unit of a state-owned manager of distressed debts, disclosed to the Hong Kong Stock Exchange late on Thursday that it had sold off most of its holding of the offshore bond at a significant discount just before the redemption time, citing the risk the debt might not be paid.

Cinda said it pocketed $4.7 million for notes with a face value of $6 million. It had held $10 million of the bonds.

S&P Global Ratings withdrew its rating on the company's debts on Dec. 6 at Ruyi's request.

Moody's Investors Service further downgraded its rating on the bond coming due by one notch five days later, citing Ruyi's weak financial position. It said the company had cash on hand of 8.8 billion yuan as of September but faced 16.6 billion yuan in debts and bills to pay over the coming year when it would generate an estimated 1.8 billion yuan of cash from its operations.

"Moody's is also concerned over Shandong Ruyi's timely execution of its refinancing plans to meet its obligations, given its limited progress to date," it said, referencing unrealized intentions to list or sell various assets and secure further borrowings. 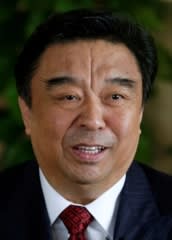 In a terse statement circulated on Chinese social media on Friday, Ruyi, which is also backed by Japanese trading company Itochu, said it had paid back the offshore bond on schedule on Thursday. Company spokesmen could not be reached for comment.

China has seen an unprecedented surge of corporate defaults, with Shandong Province a particular area of distress in part because of cross-guarantees of debts between local private companies. Hengfeng Bank, a provincial lender, received a 100 billion yuan bailout earlier this week.

"China's mounting defaults reflect the struggles of private firms as a slowing economy and high refinancing pressures make it harder for companies to repay debts and take out new loans," said Jenny Huang, Fitch's director of corporate research, in a recent note.