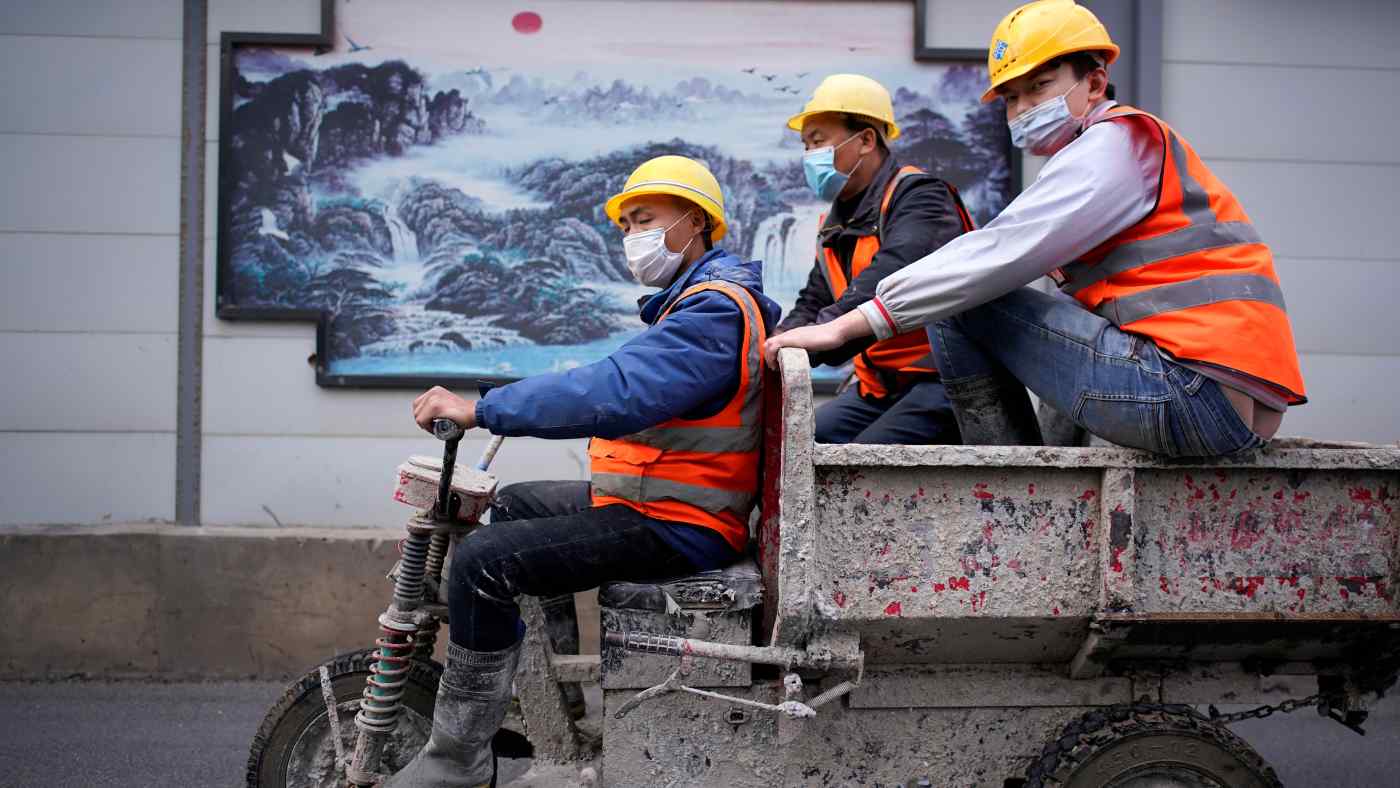 More Wuhan residents are returning to work now that the city has been out of its lockdown for about three weeks.   © Reuters
CK TAN, Nikkei staff writerApril 30, 2020 18:02 JST | China
CopyCopied

SHANGHAI -- As the last 12 coronavirus patients were discharged from Wuhan hospitals on Sunday, China began cranking up its investment efforts, hoping to make up for an economy-crippling first quarter.

That same day the government declared all of Hubei Province to be free of the virus, and on Wednesday Beijing announced that the National People's Congress will open its annual session on May 22.

These two announcements signal a return to normalcy and allow the government to turn its focus to the economy, with an emphasis on helping investors and businesses get back on their feet. For big businesses, this is good news.

ExxonMobil broke ground on a $10 billion petrochemical plant in the southern province of Guangdong on April 22 after government officials pushed for the project to go ahead as planned. Vice Premier Han Zheng officiated a ceremony from Beijing, with representatives of the oil giant participating from Dallas and Huizhou via a live stream -- a sign of the times and a reminder that some social-distancing measures remain in place across China.

Guangdong Gov. Ma Xingrui in early April told Darren Woods, chairman and chief executive of ExxonMobil, that the provincial government will ensure international businesses can easily operate in the country. Ma also expressed hope that the U.S. oil giant will do its part to ensure the smooth execution of the project, state media reported.

The petrochemical plant is of particular importance to China. It is expected to produce an annual 1.6 million tons of ethylene, which will help China attain the self-sufficiency it so craves. The plant will support the economic development of the so-called Greater Bay Area of Guangdong, Hong Kong and Macao. The Greater Bay Area is a priority for Beijing, which sees the project as a key growth driver for Southern China.

The project will also give inbound investments a boost after fixed asset investments fell an annual 16.1% in the first quarter. They had been growing at a 5% pace in previous quarters.

Beijing is not merely focusing on old-world industries such as energy; it is also looking to boost investments for new-world technologies, particularly now that the traditional workplace may have been forever altered by the pandemic.

Demand for digital services surged as countries around the world adopted lockdowns and other strict measures. Amid the uncertainty, students turned to the internet to study from home, more workers began telecommuting and doctors saw patients via video chat apps.

In turn, high-tech services that were already growing fast gained new incentives to expand. Demand for data centers and servers is higher than ever.

Alibaba Cloud Computing recently announced that over the next three years it will spend 200 billion yuan ($28 billion) on research and development of core technologies, including cloud operating systems, servers and chips.

It will also expand the scale of its data centers and servers, a key strategy spelled out last year by its parent, Alibaba Group Holding, to drive future growth. The online retailer had projected lower revenue growth in the first quarter as China's retail sector slowed. 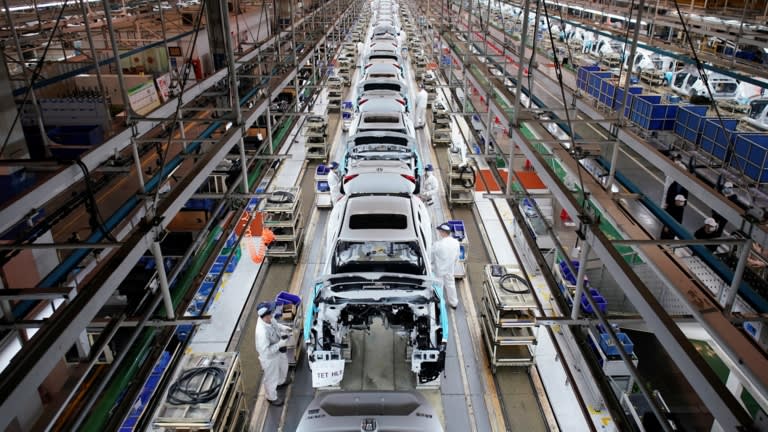 A joint venture between Dongfeng Motor Group and Honda Motor in Wuhan has resumed two daily shifts that are producing 810 cars a day.   © Reuters

Such a dramatic move online will require faster computing devices with larger data capacities. Shanghai-listed Dawning Information Industry on April 23 announced a plan to raise 4.78 billion yuan through a private share placement. It will use the funds for R&D in high-end computer chips. Dawning, also known as Sugon, is one of China's supercomputer makers.

This group's net profit grew 16% to 59 million yuan in the first quarter despite a revenue fall of 8%. Guosen Securities said in a report on Tuesday that it expects Dawning's net profit to grow 47% in fiscal 2020.

In Wuhan, there are signs that companies are shaking off their first-quarter nightmares. Huawei Technologies, the world's largest telecommunications equipment maker, on April 20 told an online summit that production at various facilities in Wuhan has returned to normal.

Wuhan-based Dongfeng Motor Group said its joint venture plant with Japanese automaker Honda Motor has resumed two daily shifts that are producing 810 cars per day. The group's other plant, in Shiyan, Hubei, is making 750 heavy trucks per day in an effort to make up for lost production during the lockdown, a company executive told a recent public forum.

For other sectors, the road to recovery could be much longer and arduous. Two-thirds of 160 food and beverage operators surveyed by Shanghai-based online portal Nomfluence in April said sales fell between 30% and 60% compared with the same period last year as customers stayed away due to concerns of a second outbreak and worries about money.

Liu Zhiyin, a food deliveryman in Shanghai, told the Nikkei Asian Review that at least one-third of the restaurants he used to collect orders from have gone bust.

For Yum China, operator of KFC, Pizza Hut and other food and beverage businesses, the pandemic has altered the way it conducts business for the foreseeable future. In a conference call on Wednesday, Yum Chief Executive Joey Wat said nearly all of the company's 9,295 stores in over 1,400 cities, including Wuhan, now only open for limited hours and with scaled-back services.

Social distancing, telecommuting and travel restrictions, Wat said, have become the "new normal [which] fundamentally impacts the way we work and the services we provide." Even for a foreign brand that has had particular success penetrating China, Wat said, "2020 will be a very challenging year."

For other outward-facing companies, China's recovery means they can restart manufacturing, but the lockdowns in many cities around the world are hampering demand. Chinese exporters are facing weak demand all over the world. (FeatureChina via AP Images)

"There is no problem for us to produce in China," said Huang Xinting, a teapot exporter based in Fujian. "It is the global pandemic that has adversely affected our business."

China is still enforcing a 14-day quarantine on arrivals from overseas, which is problematic for Danny Lau and his aluminum facade panel factory in Dongguan. The quarantine is keeping overseas customers from visiting Lau's factory to inspect samples before placing orders.

Lau has resorted to online marketing, but customers remain hesitant. "Some said they would rather wait," he said, "and some decided not to place orders."

In a meeting on April 23, Premier Li Keqiang urged provincial officials to make use of local government bonds to expand investment and boost domestic demand. The finance ministry has promised to bring forward a 1 trillion-yuan allocation of special-purpose bond quotas for local governments. This is on top of the previously approved 1.29 trillion yuan of such debt.

China's recovery will likely be subdued as long as preventive measures remain in place at home and abroad. Until the rest of the world puts the pandemic behind it, China's economic recovery will be limited and businesses will struggle.

The government has promised to offer financial support to micro-, small- and medium-sized enterprises, but whether this can be delivered quickly enough to save businesses remains to be seen.

"Some small businesses do not have enough cash to go through the crisis," said a sales manager at a factory that makes speakers. The manager was concerned with the company's ability to afford to pay the minimum wage while also buying government-required protective gear for its workers.

"That should not be too difficult for big factories," the manager said, "but it could be the last straw for some small businesses that have had financial woes."