Sunjoule has solar cells sandwiched between layers of glass and can be installed just about anywhere normal glass would be used.

The product can generate 2 to 4 watt-hours of electricity per per square 15.6cm on a side, varying according to the design. It was introduced in Japan in 2000 and is used in several hundred buildings, according to the company. 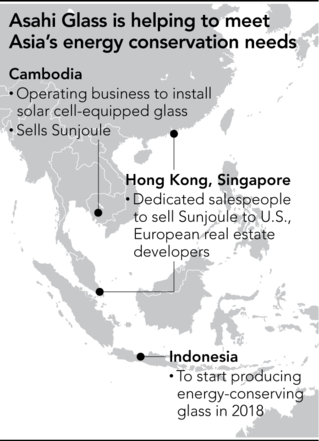 In Singapore and Hong Kong, the company has assigned dedicated sales staff to target the many European and U.S. real estate developers that are typically keen on unique designs and functionality.

Asahi Glass also aims to sell Sunjoule to construction projects in Australia and elsewhere in Oceania.

In Cambodia, the company will look to profit from business leads established in 2016, when it installed solar-power glass at a number of hospitals and schools. The deals were part of a project under the so-called joint crediting mechanism, through which Japan earned emissions-reduction credits through projects in the Southeast Asian country.

The company aims to install Sunjoule in government buildings, hospitals and public facilities and expects demand for Sunjoule to be supported by Cambodia's low rate of electricity self-sufficiency, which stands at just over 70%. The country relies on power supplied from Thailand and Vietnam for the rest of its energy needs.

Asahi Glass aims to win the first export orders by the end of this year and boost the number of deals in Asia and Oceania to at least 15 by the end of 2020.

The company sees growing needs in Asia for high value-added products like Sunjoule to address energy-conservation at buildings and plants. There are areas of the country where a lack of power is stifling economic growth as the construction of new power plants has not kept up with the rapid growth of urban areas and industrial development.