Even Son Masayoshi, the hard-charging CEO of the telecom and internet conglomerate, who is known for boasting about his outsize ambitions, has called the "Asia Super Grid" project "oburoshiki," the Japanese word for "big talk." 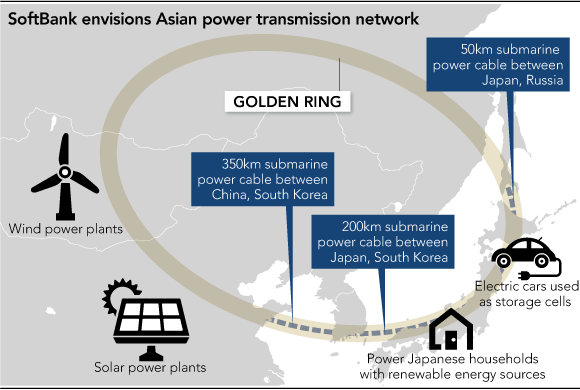 SoftBank announced on Oct. 6 it had started operating a wind power plant in Mongolia, which is, according to the company, one of the largest in the country.

The plant comprises 25 gigantic wind power generators installed on a grassy plain in the middle of the Gobi Desert, a seven-hour drive from Ulaanbaatar, Mongolia's capital.

The 50 megawatt wind farm can supply 5% of the country's overall power consumption. If applied to an advanced economy such as Japan, at an assumed operating rate of 20%, the plant would be able to power more than 20,000 households.

Electricity produced at the station is first transmitted to Ulaanbaatar to supply power to consumers. But SoftBank plans to expand the plant to export electricity to neighboring countries in the future.

The wind power station in Mongolia, however, is only a small part of the company's gargantuan power grid project. Son envisions an enormous multinational power supply network that will send electricity generated in Mongolia and also in India to Japan, China, Russia and South Korea by using above-ground transmission lines and submarine power cables. Shigeki Miwa, who is leading Softbank's Asian Supergrid project, tours the wind power facility in the Gobi Desert in Mongolia.

There will inevitably be massive transmission losses, but Son is betting low-cost power generation in Mongolia will enable profitable operations.

"Since this is such a grandiose project, many people told me it is crazy," Son said. "They said it is impossible both economically and politically."

But he has been carefully laying the groundwork for the project.

In December, when Russian President Vladimir Putin visited the Keidanren (Japan Business Federation) building in Tokyo, which houses the headquarters of the nation's largest business lobby, Son was the first Japanese businessman to approach him.

Seeing TV footage showing Son and Putin in close conversation, with arms around each other's shoulders, one Keidanren official sarcastically said, "I seldom see him (Son) there."

Son's move to take advantage of an event organized by the business community, which he usually keeps at a distance, did not go down well with many Japanese business leaders.

Son had met with Putin half a year earlier in Saint Petersburg and asked for Moscow's support for his Super Grid project.

After that Saint Petersburg meeting, Son started a feasibility study for a plan to send electricity generated at a hydroelectric power plant in the Russian Far East to Japan via either Vladivostok or Sakhalin.

In March last year, Son moved to forge a partnership with electric utilities in China, South Korea and Russia to create a framework for building an interconnected power grid spanning the region.

SoftBank will also seek support from the leaders of these countries.

The brash SoftBank founder loves to make a splash and has long been known for overambitious and sometimes head-scratching strategic moves. His recent high-profile investments include a 10 trillion yen ($90 billion) technology investment fund launched with Saudi Arabia and a stake in Uber Technologies.

For years, Son has been harboring a passion for the power supply business.

The trigger for action was the 2011 earthquake and tsunami which showed how vulnerable and dangerous nuclear power plants were. Struck by the nuclear meltdown in Fukushima, Son told fellow board members after that he was quitting as SoftBank president to embark on a safer alternative energy business.

At the board meeting, held just after the earthquake, Son was persuaded by other board members, including Uniqlo-operator Fast Retailing's chief executive Tadashi Yanai, an outside director, out of a headlong, all-out plunge into the sector. Son then decided to start a power business only as a non-core part of SoftBank's business portfolio.

Instead of heading the power unit himself, Son picked Shigeki Miwa, a general manager who handled scrap iron trading earlier in his career at Japanese trading house Mitsui & Co.

At that event, Miwa presented his proposal about SoftBank's expansion into the power sector. He laid out an ambitious vision about SoftBank's future as the operator of a network of smart grids in Asia. Miwa stressed the need for SoftBank to acquire Singapore Telecommunications in order to achieve the goal.

Son was impressed by Miwa's vision, which he said was identical to his own. "Your presentation exactly described the idea I have been considering," Son said to Miwa.

In fact, SoftBank was close to striking a deal to acquire Singtel at that time.

"I am a trading company employee," Miwa responded. "I just tried to figure out your thoughts (about SoftBank's power business) from my own viewpoint."

After listening to Miwa's reply, Son said, "Come work for me immediately."

Prodded by Son's job offer, Miwa quit Mitsui, where he had spent the past 20 years.

Miwa closely studied Son's life and was inspired by his rags-to-riches success story. Born as a third-generation Korean resident of Japan, Son started his business career in a hut with a tin roof filled with the smell of bootleg liquor.

Miwa saw many similarities between Son and Saito Dosan, a warlord and hero in the warring states period (1467-1568), who, like Miwa, was a native of Gifu Prefecture. 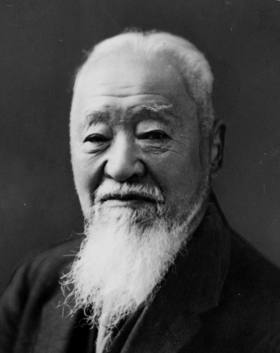 When he was told by Son to "work beside me," Miwa felt his dream had come true.

Miwa was entrusted by Son with the mission of bringing the Asian power grid project to fruition.

In the summer of 2013, Miwa made his first trip to the Gobi Desert, which he had chosen as the launch site for the project.

To secure support from local communities for the project, Miwa drank airag, a fermented milk beverage made from mare's milk, with local chieftains in gers (tents).

Besides the expected transmission losses, the envisioned Asian power grid will face other risks, such as terrorist attacks and leaks of information about the network. The future of the project is unclear, but Miwa remains unfazed.