Asia is home to 50% of world's fastest growing companies TAIPEI/SHANGHAI -- Ten years after the global financial crisis, Asia is booming. Buoyed by more affluent consumers, companies there have experienced explosive growth. Their next challenge, as local economies mature, will be pitching their products to the rest of the world.

1,679 Asian companies have increased their market capitalizations by more 10 times over the past decade, according to a breakdown of Nikkei data. That is more than half of all "ten baggers" around the world. The figure does not include companies in the Middle East, Central Asia or Japan.

A ten bagger in baseball refers to a player who gets 10 base hits in a game. In finance, the term describes a company whose stock has risen 10 times or more in price.

Asian companies are growing thanks to the strong demand that is coming with the region’s economic growth. Gross domestic product in emerging Asian economies expanded 160% over the past 10 years, while global growth measured about 30%, according to the International Monetary Fund. Asia is also luring funds from overseas investors, who are betting on its growth.

Using data compiled by QUICK FactSet, the Nikkei analyzed about 30,000 listed companies around the world and tallied those whose stock prices have risen 10 times or more over the 10 years through March. There were 3,346 ten baggers, just over 10% of the companies examined. Broken down by region, Asia led the way, followed by the U.S. with 482 companies, Europe with 470 and Japan with 193. 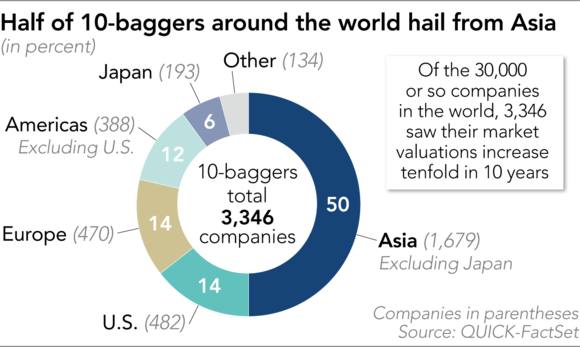 Tata Consultancy Services, a typical Indian ten bagger, saw its market capitalization jump 10 times to $108.3 billion. It has established a leading position in fields like cloud computing and artificial intelligence.

The company's market value has increased sharply thanks to active investment in these cutting-edge areas, CEO Rajesh Gopinathan said.

Although India’s economy is humming, its GDP per capita remains low at just over $2,000. Indians are spending more to improve their standards of living, further supporting companies’ growth. Financial institutions providing personal loans, like Bajaj Finance, sharply increased their market values, as did major steel and cement companies.

China came in second with 334 ten baggers. Tencent scored a 33-fold increase in market capitalization to $437.8 billion, the second largest among ten baggers in the world after Amazon.com.

WeChat, the company’s messaging and mobile payment app, has been key to that. With 1.1 billion users, the app is used even in China’s rural villages. Using it, the company has developed a wide variety of revenue sources, like smartphone games, online food delivery, music streaming and travel bookings.

The company has beaten the competition by providing services timed with the spread of smartphones in China, Tencent CEO Ma Huateng said.

As China's per capita GDP nears $10,000, there are more middle-income earners in Shanghai, Beijing and other coastal cities. Companies like Kweichow Moutai, a luxury Chinese spirits maker, travel agency Ctrip and ANTA Sports Products, are benefiting from more diversified consumption. In South Korea and Taiwan, world-leading high-tech companies are part of the supply chain for smartphones and other electronic devices. South Korean semiconductor maker SK Hynix ranked sixth among ten baggers thanks to strong demand for memory chips for data storage. Largan Precision in Taiwan, a top supplier of optical lenses for devices like smartphone cameras, boasts a net-profit-to-sales ratio of nearly 50% thanks to its advanced technology.

Many fast-growing companies have emerged in Southeast Asia as well. The number of ten baggers stood at 85 in Indonesia, 82 in Thailand and 71 in Malaysia. Among them are leading Indonesian tobacco maker Gudang Garam, Thai retailer CP All and Hap Seng Consolidated, a Malaysian conglomerate.

There are many consumer- and medical care-related businesses among these fast-growing companies. Airports of Thailand, ranked 10th, enjoyed strong earnings from duty-free shops thanks to an increase in visiting tourists. CP All and Indonesia's Sumber Alfaria Trijaya have grown by operating convenience store chains.

There were also many financial ten baggers, including HDFC Bank of India and Citic Group of China.

Experts are split over whether Asian companies will maintain this rate of growth as the Asian economy matures.

Asia's economic growth will slow from 5.9% in 2018 to 5.7% in 2019, and 5.6% in 2020, according to forecasts from the Asian Development Bank. Although consumption remains solid in many economies in the region, uncertainty is on the rise due partly to trade friction between the U.S. and China.

Strong growth expectations have made some stocks overvalued, analysts said. The price-earnings ratio, or the ratio of a company's stock price to its earnings per share, stands at 40 for Tencent and 26 for TCS, compared with the averages ranging from 13 to 18 for many Asian markets. Tencent stock has fluctuated wildly, plunging to about HK$250 ($31.87) in autumn of 2018 from more than HK$400 in June of that year.

As Asia’s economies have grown more mature, consumption has diversified and other trends have progressed. That means it will be difficult for companies in the region to keep growing through the conventional method of "simply pursuing expansion of scale," said Toru Nishihama, chief economist at Dai-ichi Life Research Institute.

Now that children of founders, who have ample experience studying abroad, have taken the helm of management, "the key is whether they can exploit global demand for original products and services created in Asia," Nishihama said.