SINGAPORE -- The coronavirus pandemic disrupted business across Asia in the first quarter 2020, forcing leading companies from China Petroleum & Chemical (Sinopec) to Toyota Motor to post their weakest earnings in years.

According to QUICK-FactSet data, 22 of 32 Asian powerhouses with market capitalizations over $50 billion at the end of December, excluding financial institutions, reported losses or lower first-quarter net profits than a year earlier.

The 32 companies include 13 from China and Japan each, three from India, two from South Korea and one from Taiwan, in sectors varying from manufacturing to energy to telecommunications. The companies have been at the center of the region's economic growth, but their combined net profit for the quarter dropped 45% on the year, a reflection of the pandemic's deep economic impact.

The coronavirus, which broke out in China toward the end of last year, has gone on to kill 400,000 people across the globe.

It began devastating economies in the first quarter, closing factories and offices, and sapping consumer demand. Asian manufacturers, with supply chains and big customer bases throughout the region, were especially hard hit. Shop assistants in face masks await business at an electrical appliances store in Xianning, China, in March. Sales of durable goods have tumbled due to the coronavirus pandemic.   © Reuters

The lockdowns meant air conditioners -- the core product of both companies -- could not be installed. Demand was also impacted by new energy efficiency requirements that take effect in China on July 1, prompting consumers to wait for new products.

If the two producers can engineer rebounds for the rest of 2020, their performances would still be weaker than last year, China Galaxy Securities' analysts say. The brokerage projects Gree's net profit to contract 11% for the year. Midea, which has trimmed the pay of top executives by 30%, will perform at nearly the same level as last year thanks to stable sales channels and supply chains, the analysts said.

In the automobile industry, Toyota's net profit plunged 86% to 63.1 billion yen ($587 million), while Honda Motor's loss widened to 29.5 billion yen due to factory shutdowns as well as declining demand. Honda has a plant in the Chinese city of Wuhan, where the coronavirus jumped to humans.

"The impact of the coronavirus is bigger than that of the global financial crisis," President Akio Toyoda said during an online news conference on May 12.

There are signs of recovery, including that China's auto sales began picking up in April. Neither Toyota nor Honda has disclosed net profit projections for the current fiscal year ending next March, citing market uncertainties, though Toyota says its operating profit will drop 80% from the previous year. 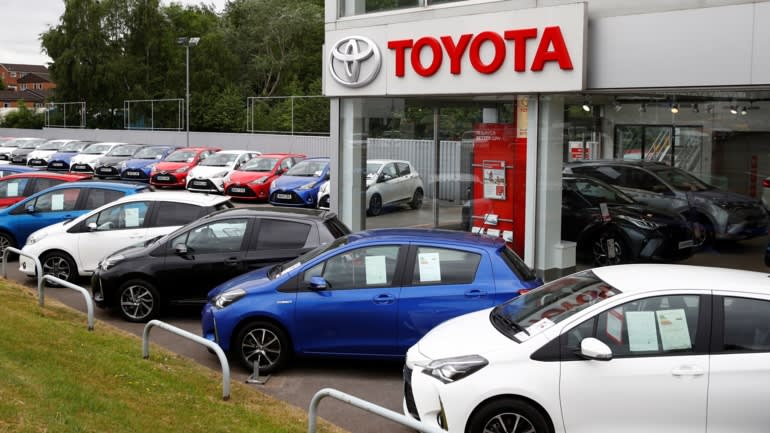 Toyota recorded a net profit of 63.1 billion yen in the March quarter, down 86% from a year earlier, due to factory shutdowns as well as declining demand.   © Reuters

Among other Japanese companies, Sony Corp.'s net profit fell 86% in the first quarter, partly due to factory closures in Malaysia and China. Uniqlo parent Fast Retailing's profit for the December-February quarter dropped 27% on weak performance in China.

The oil sector was also walloped by the pandemic, which made causalities out of Chinese state-owned companies Sinopec and PetroChina. The bottom lines of both companies dipped deep into the red in the first quarter. Their combined net loss reached 36 billion yuan ($5 billion), down from a 25 billion-yuan profit a year earlier. They were the only two of the 32 companies to sink into the red for the quarter.

Both suffered sharp declines in demand for oil and oil products as economic activity slowed to a crawl. The duo's aggregate revenue declined 19%. A plunge in oil prices, exacerbated by open bickering among leading petroleum producers, ramped up the pain. Both companies recorded combined asset impairment losses of 18.2 billion yuan, owing mostly to increases in inventory impairment.

With oil prices now gradually climbing, the companies could gain some breathing room, but not much. Both are tightening their belts.

"Faced with an unprecedented and severe situation, the Group will highlight its key projects while constraining on its non-major projects," said Dai Houliang, chairman of PetroChina in a quarterly statement. Sinopec Chairman Zhang Yuzhuo said in a statement that the company "will adjust dynamically the production and operation arrangement and the investment plan, focusing on achieving a high-quality and more profitable operation."

Indian conglomerate Reliance Industries, which operates in the energy sector, experienced a 39% decline in its quarterly profit.

For the April-June quarter, Asian companies' earnings "could be even weaker on a year-on-year basis, especially in countries which witnessed the bulk of the lockdowns during the second quarter of this year such as parts of South and Southeast Asia," Chetan Seth, a Singapore-based equity analyst at Nomura, told the Nikkei Asian Review. "That said, weak earnings are widely expected by the street and therefore the question is whether actual earnings manage to beat these low earnings expectations which, in our view, should determine the direction of stocks."

Back to the first quarter, the remaining 10 of the 32 majors saw their earnings improve thanks to opportunities that emerged as people were told to shelter at home and began working from home. Lockdowns have given the gaming industry, including companies such as Nintendo and Tencent Holdings, a boost as people played more games at home.   © Reuters

Samsung Electronics, though its net profit dropped 4% in the first quarter due to fewer sales of smartphones and small and medium-size display panels, expects demand for memory chips to increase for the rest of the year as workforces settle into their home offices. Japanese brokerage Nomura says memory chips will begin driving earnings growth in the third quarter.

Samsung's South Korean peer SK Hynix, whose profit dropped 41% in the first quarter, now forecasts chips for the server market to grow in the medium- to long-term as demand for noncontact technologies increases.