Asia's print media are on the ropes

SINGAPORE -- Singapore Press Holdings, the publisher of the city-state's largest newspaper, The Straits Times, said on Oct. 17 it will shed up to 10% of its approximately 4,200 staff members over the next two years to cut operating costs.

The company has been suffering from declining advertising revenue and circulation amid an onslaught from emerging online media. Net profit for the year ended in August dropped 17.5% to 265 million Singapore dollars ($189 million), while revenue fell 4.5% to S$1.12 billion despite being propped up by the company's property business, whose revenue grew 4.6% to S$241.3 million. 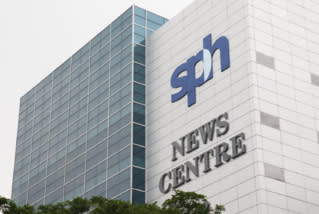 "We have had to take difficult decisions on cost control measures to improve operational efficiency," CEO Alan Chan said in a statement.

Singapore Press's plight reflects how tough the environment has gotten for regional print media. The company enjoys a relatively favorable position as the sole newspaper publisher in the city-state, and while it is not government-owned, the content of its publications is heavily influenced by the authorities, effectively making them a semimandatory read for civil servants and businesses seeking insight into policymaking. Even so, the daily average print circulation of The Straits Times fell to about 276,000 in August from more than 300,000 a year earlier.

The problem is even more acute for the publisher's tabloids, whose content is more widely available for free online. Along with reducing its workforce, the company intends to merge two of its tabloids into one free paper starting in December.

"I used to read the paper on long bus and train trips. I liked their down-to-earth writing style and content," recalled Anand Singh, a Singaporean man in his 40s who works at a restaurant and used to be a faithful reader of one of Singapore Press's tabloids until about five years ago. "I guess I stopped reading it after I owned a smartphone," he added. 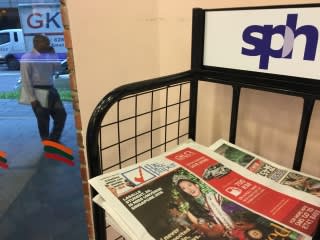 Singapore Press Holdings has suffered from a rapid erosion of readership, especially at its tabloids. (Photo by Tomomi Kikuchi)

Oliver Wilkinson, director of strategy at PricewaterhouseCoopers in Singapore, says the outlook for print media in other countries is even grimmer. "Singapore is a rare country where print accounts for the largest pie of total advertising spending, at around 50%," compared with a global average that has fallen to about 30%, he said.

Other Southeast Asian countries have seen a number of newspapers shut down over the past few years. The Jakarta Globe, an English-language daily published by BeritaSatu Media Holdings, under the Indonesian conglomerate Lippo Group, stopped printing last December after seven years of existence and is now available online only. Lippo had been restructuring four of its media outlets for several years, resulting in more than 100 job cuts. In Malaysia, poor sales led KiniBiz to shut down both its fortnightly print magazine and online versions in February, nearly three years after the publication was launched.

Advanced economies with a higher penetration of the internet and smartphones are witnessing an even faster slide in print media. According to PwC, the newspaper industry in Hong Kong is expected to shrink at a compound annual rate of 5.4% between 2015 and 2020, making it one of the worst performers in the Asia-Pacific region. Australia (-1.7%), Japan (-2%), New Zealand (-4.4%) and South Korea (-2.1%) are also projected to register declines during the period. Newspaper publishing revenue in the region peaked in 2013 and is expected to shrink about 6% by 2020. Taiwan's China Times Group and the United Daily News Group have integrated their financial and evening newspapers to cut labor costs. Another major newspaper, Apple Daily, a unit of Hong Kong-listed media conglomerate Next Digital, offered early retirement to reporters earlier this year. A number of senior management members have since left the company. In South Korea, Hankook Ilbo, the parent company of The Korea Times, was acquired last year by Dongwha Group, a wood materials company, after the publisher sought court protection in 2013 following an embezzlement case.

Some have raised concerns that consolidation of publications and takeovers by nonmedia companies may influence editorial independence and the diversity of journalism. In New Zealand, two media companies have proposed a merger that would create a near-monopoly in the country's newspaper industry. While the companies insist the merger will let them compete against global online networks such as Facebook, critics have argued that the merged company would have too much power in the country's media landscape.

There are similar concerns in the Philippines as well. The major telecommunications group PLDT, an affiliate of the Indonesian conglomerate Salim Group, acquired a majority stake in the popular newspaper The Philippine Star in 2014. The group also has a minority stake in the influential Philippine Daily Inquirer. Although PLDT chairman Manuel V. Pangilinan has said the media investments are part of the group's content strategy, some speculate that they could buy influence to help enhance his businesses, which are mostly public utilities.

Chinese e-commerce giant Alibaba Group Holding's $266 million acquisition of Hong Kong's English-language newspaper South China Morning Post, completed in April, sparked concern that the deal was more of an attempt by the Chinese company to boost its overseas influence than a lucrative financial investment. Fears have also grown over the paper's editorial independence following a comment Alibaba Executive Vice Chairman Joseph Tsai made in an interview, in which he said the e-commerce company would use the SCMP to make coverage of China "balanced and fair," as he sees mainstream Western news media to be covering China "through a very particular lens."

The public credibility of print media in the territory has fallen to the lowest point since the handover of sovereignty in 1997, according to a survey conducted by the Chinese University of Hong Kong almost every three years. The most recent one, released in September, indicated the overall credibility rating of 11 paid newspapers was 5.58, down from 5.80 three years ago, on a scale from 1 to 10. 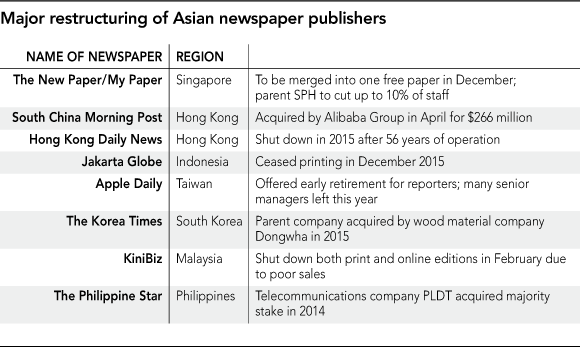 Clement So York-kee, a professor at the university who supervised the survey, pointed to the deterioration of press freedom, self-censorship and a lack of sufficient funding to conduct journalism due to "managerial difficulties of media organizations," as the main reasons for crumbling credibility.

The latest Hong Kong Press Freedom Index, compiled by the Hong Kong Journalists Association in March, also dropped to an all-time low. Chairperson Sham Yee-lan expressed "worries" that press freedom in the territory has been eroded at its roots. The association further warned in July that increased media control by the mainland Chinese government and corporations is causing "China's ideological control to spill over."

India seems to be an exception, as newspapers there are still a growing industry. The government's strong focus on education has improved the literacy rate over the past several years, which in turn has led to growth in newspaper readership, especially in small towns. According to a joint report by the Federation of Indian Chambers of Commerce and Industry and the consulting firm KPMG, newspapers dominated the Indian print industry last year with 95% of revenue.

Though internet penetration is increasing in India, the affordability of newspaper subscriptions at less than 200 rupees ($3) a month still attracts readers. According to PwC, India's newspaper industry is expected to expand at a compound annual growth rate of 2.7% between 2015 and 2020, one of the fastest in the Asia-Pacific region. "More brands are looking to reach out to the middle-class newspaper readers in India, which is a boost for newspaper advertising revenue," added PwC's Wilkinson.

The vast number of local languages in India can also help local papers retain and expand readers. Such newspapers are less exposed to competition compared with those published in widely-spoken languages like English and Chinese, which face competition from global peers, especially as digitalization eliminates overseas delivery costs.

English newspapers in metropolises like Singapore are right in the middle of the intense international competition. While Singapore Press has embarked on diversifying its revenue streams by acquiring companies that run online classified websites, the transformation has been slow.

"Seriously, they should have caught the digital wave six years ago," Aloysius Low, a former employee of Singapore Press and a senior online media editor, wrote on his Twitter account. Unless they can capitalize on the wave of digitalization, other Asian newspapers will likely be caught in the storm of international rivalry as language barriers and borders begin to melt.