SEOUL -- Asian shipbuilders are struggling to stay afloat as orders decline to the lowest level in two decades. Analysts see no end to the pain in sight.

New orders received by builders in Japan declined almost 90% in the first 10 months of 2016 from a year earlier, according to data from BIMCO, a global shipping industry data provider. South Korean competitors similarly saw an 84.2% drop in orders by compensated gross tonnage, an industry measure of shipbuilding output that takes into account ship size and work difficulty. Their Chinese rivals counted a 58.5% decline.

Peter Sand, BIMCO's chief shipping analyst, said that 2017 could be even worse. "There is a declining trend for Japan, China and South Korea and with such low levels of new building contracts being placed, this will look even more severe next year," he said. 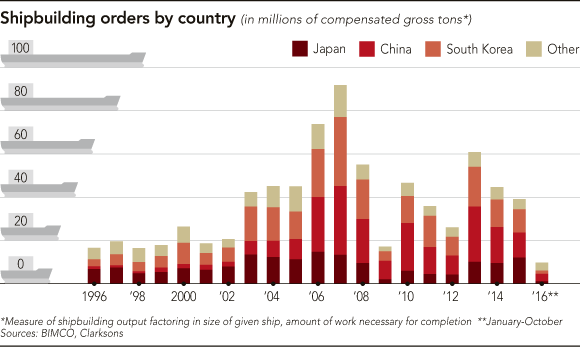 Some shipbuilders have already collapsed, including South Korea's STX Offshore & Shipbuilding, which has been under court protection since May. Others are going through tough restructuring, cutting staff and selling key assets.

Asian governments have been pumping in funds to try to keep local companies going. In particular, the South Korean government announced in October an aggressive 11.2 trillion won ($9.46 billion) package of aid to support the building of 250 ships by 2020. The package includes government orders for at least 63 vessels, including warships and police patrol ships.

Other shipbuilders are diversifying from commodity-carrying dry bulk ships into new areas such as cruise vessels. But analysts say it will be difficult to predict which companies will still be standing if and when real demand returns.

The once formidable shipbuilding industry of South Korea now finds itself having to cope with a prolonged slump, with orders at dangerously low levels. In September, the builders managed to win orders for a total of just three vessels, or one-sixteenth of the figure a year ago, according to Clarksons, a U.K. research company.

Consequently, the government is pushing to downsize the industry. On Oct. 17, Finance Minister Yoo Il-ho called on shipbuilders to expedite restructuring.

In response, Hyundai Heavy announced on Nov. 15 that it would spin off its non-shipbuilding businesses, including utilities, construction equipment manufacturing and robotics, as part of its strategy to lower debt.

Analysts said spinning off noncore businesses would help the company to endure what seems to be the worst cyclical downturn the industry has ever faced.

"We expect HHI to emerge as a strong player, versus its peers, with the spin-off," said Chung Sung-yop, an analyst at Daiwa Capital Markets. Among eight major listed Asian shipbuilders, only Hyundai is rated a "buy" by Daiwa.

In an interim report commissioned by the government, consultancy McKinsey & Co. in October went a step further and called for the consolidation of the big three into two, noting that Daewoo would not be able to survive on its own. The idea was quickly rejected by the government, leading some market watchers to question the depth of Seoul's commitment to industry restructuring.

On the positive side, an unnamed U.K. investment fund and other bidders have reportedly made offers for STX Offshore, which could value the business at up to 1 trillion won.

The situation is little better in China. The cluster of dockyards along the Yangtze River in the city of Yangzhou is testament to the industry's difficult situation. Production has been suspended at five of the eight dockyards here, while the other three are operating below capacity.

Sainty Marine, the shipbuilding subsidiary of textile company Jiangsu Sainty, went into court receivership in February and has since had trouble attracting a buyer. Officials now plan to relaunch the business as a power company.

In October, Guo Dacheng, chairman of the China Association of the National Shipbuilding Industry, called for zombie companies to be quickly weeded out, saying their continued existence was detrimental to the entire industry.

Singapore-based shipbuilders are suffering too, despite their focus on previously profitable niches. Keppel Corp. and Sembcorp Industries have been recording plunging profits from their core oil rig-building businesses.

Their businesses fell into dire straits as global oil prices stayed low and new orders for the offshore platforms used for oil exploration and production dried up. Keppel, after recording a 44.2% plunge in earnings in 2015 from a year ago, posted another 42.8% annual decline for the first nine months of 2016. Keppel has cut close to 8,000 jobs in its offshore business unit so far this year.

Sembcorp's numbers have been even bleaker, with a 31.5% fall in full-year profit in 2015 and a 49.3% annual fall for the January-September period.

Both companies have sought to grow new businesses. Sembcorp completed the $20 million acquisition of Norwegian ship design house LMG Marine in August. In October, Keppel's shipyard signed contracts with two affiliate companies to build two tugs that can run on either diesel or LNG. The company also set up a joint venture with Royal Dutch Shell to offer LNG bunkering services and has a partnership with the European oil major to explore opportunities in other LNG-related businesses.

"We are looking at re-purposing the technology that we have developed in the offshore industry for other uses such as floating power plants and floating desalination plants," Keppel chief executive Loh Chin Hua said of the company's diversification plans.

In response to the worsening environment and the additional impact felt by the rising yen which has eroded the value of overseas contracts signed in previous years, Japan's major shipbuilders are also looking at new options.

After a pause of around a decade, Mitsubishi Heavy Industries restarted building large passenger ships in 2013, a more lucrative segment than container ships. However, the company indicated in October that its Nagasaki Shipyard & Machinery Works unit had lost more than 250 billion yen ($2.25 billion) on an order from a U.S. cruise line for two vessels amid repeated design changes and costs from importing European equipment.

As a consequence, Mitsubishi said in October that it will only accept orders from hereon for smaller passenger vessels while seeking more orders for LNG carriers. It is holding discussions with Imabari Shipbuilding, Oshima Shipbuilding and Namura Shipbuilding to realign resources for the building of such ships; the three companies specialize in bulk carriers for iron ore and other commodities. Mitsubishi Heavy President Shunichi Miyanaga said it is "a good time to proceed with consolidation and structural reforms."

Imabari is building a highly automated, 40 billion yen dock in Marugame, Kagawa Prefecture, the first such project in Japan in 16 years. It plans to begin building there a 400-meter container ship that will be the largest such vessel ever constructed in Japan. President Yukito Higaki envisions making his company "a department store of ships." Kawasaki Heavy Industries has indicated that it will this year book a 13 billion yen loss from its ship and offshore structure businesses engaged in the construction of support vessels used in the development of seabed resources. The business posted a loss of 7.9 billion yen in the fiscal year that ended last March. The company is mulling countermeasures, including discontinuing or restructuring the business, and hopes to come to a decision by next March.

Likewise, IHI on Oct. 24 cut its annual earnings projection, citing a 16 billion yen cost overrun in its offshore structure business handling tanks for LNG carriers. The company is reviewing the business and considering withdrawing from the sector.

Choi Jae-hyung, an analyst at Nomura, is optimistic that the shipbuilding industry has hit bottom and will start to rebound in 2017. Yet this does not necessarily mean shipbuilders' earnings will improve because of tough competition to win new orders amid underutilized capacity.

"(Shipbuilders) will have a better order cycle next year than this year," Choi said.

BIMCO's Sand isn't so sure. "As 67.9% of the Chinese order book and 58.4% of the Japanese order book are deliveries for either the container, dry bulk or offshore segments, there is a possibility for postponements and cancellations," he said. "The postponements can add a further headache to the shipyards' liquidity, as the final payments in these cases may be delayed."

Yoshikazu Nakaya, a shipping analyst with Mizuho Bank, said, "The industry won't recover until 2021,"calling the current slump "worse than the one following the global financial crisis."