Central bank said to be unhappy with Sharma's performance MUMBAI -- Shikha Sharma, the chief executive of Axis Bank, India's third largest private lender, has offered to step down in December a few days after reports that the Reserve Bank of India asked the bank's board to reconsider her extension beyond June.

Sharma's next term was to have lasted three years, but Axis Bank informed stock exchanges on Monday evening that it will end in December. "The Board has accepted her said request, subject to the approval of the RBI," it said.

Sharma, who has served as chief executive since 2009, was due for her fourth renewal after receiving board approval in December.

The bank offered no further explanation, but the announcement came within days of a Press Trust of India report about an RBI letter to Sanjiv Misra, Axis Bank's chairman, regarding Sharma's reappointment. It made reference to "the bank's performance and deteriorating asset quality condition over the years."

The RBI recently imposed a penalty on Axis Bank for under-reporting bad loans. The bank's net nonperforming assets were only 0.44% of loans in March 2015 before the RBI began an asset quality review. By December last year, nonperforming loans registered 2.56% of the total. 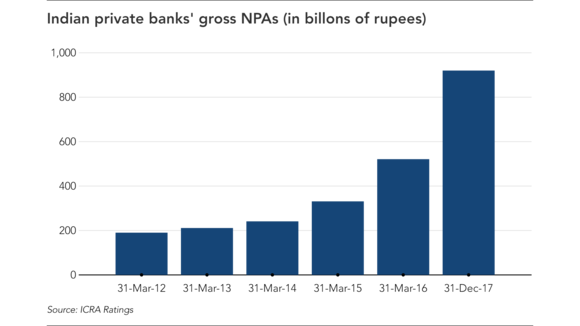 The bank has also had other issues with the authorities. In December, the Securities and Exchange Board of India asked for a review of its internal processes after financial results leaked to groups on WhatsApp, a messaging platform.

The government's focus on banking reform has suddenly shifted to private lenders, which were long considered more prudent with better governance than state banks.

Axis Bank is not the only private bank facing problems with the authorities. There has been speculation that Chanda Kochhar, chief executive of ICICI Bank, may also be asked to step down over ongoing investigations into alleged cronyism. Law enforcement agencies are investigating if there was any illegality in a loan of 32.5 billion rupees to the Videocon Group. They are probing the relationship between Kochhar's husband, Deepak Kochhar, and Videocon Chairman Venugopal Dhoot.

Both bank chiefs have also recently been questioned by the Serious Fraud Investigations Office in connection with alleged fraud at Punjab National Bank involving Nirav Modi, a billionaire jeweler.

The Reserve Bank of India is putting the entire banking house in order after many state banks have benefited from major capital infusions. The government has pledged 880 billion rupees ($13.5 billion) to state banks, and has issued guidelines to all lenders in its bid to clean up the financial system.

The finance ministry said it wants lenders to improve customer responsiveness, responsibility, financial inclusion, digitalization, and staff development. At the heart of this is a drive to weed out corruption and improve efficiency. Bad loans in the sector rose to around 7.34 trillion rupees as of the end of December.

Some experts believe that the RBI move on Axis Bank is a sign that private bank chiefs are to be held accountable for their shortcomings. RBI Governor Urjit Patel wants to do the same in the public sector. In a speech last month, he complained of the central bank's "very limited authority" dealing with stumbling state banks. He said the RBI is unable to compel bank mergers, replace boards, or revoke licenses -- as it can with private lenders.

"It could be seen as a strong signal from the central bank given the aggressive stance it has taken on asset recognition for the sector in general. While it may seem that the recent developments with respect to private-sector banks is isolated in nature but it could be a precursor for similar actions at public-sector banks since the problem is much bigger at those banks. Since the emphasis is on how banks are recognizing assets, it will be unwise to assume that such instances would be limited to only a certain category of banks," said Saswata Guha, Fitch Ratings director of financial institutions in India.

"Perhaps the phase has begun where we will see RBI acting more intrusively on such matters," added Guha. "End of the day these are professional board-run institutions and need to be held accountable."